When I was growing up in Central Otago (New Zealand) graywacke was a bane of my life, and certainly of my Dad’s too. The family lived on a section near the foot of an alluvial terrace dating back to glacial times. The loess soil was soft, but the impact of a metal fork on a graywacke boulder, hidden in the otherwise nice soil, jared up your arms and left a metallic streak of the fork tongs on the rock surface. 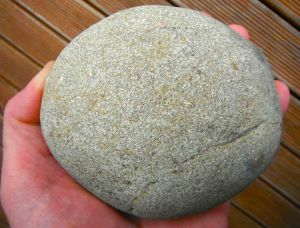 A humble cobble of greywacke, picked up on Mondillo Vinyards, Bendigo, Central Otago.

Graywacke was simply a word I was brought up with – graywacke boulders are a common feature of the Quaternary alluvial terraces of Central Otago, and I could spot them from an early age. To me, they were simply hard, drab, and dead-boring (no fossils). At the time I was oblivious that graywacke was the bane of other people too, although for quite different reasons than its effect on digging up potatoes. The issue was over the definition and correct usage of the term amongst professional geologists. It mostly stayed below my radar, but it’s time now to try and understand what the problem was.

It became clear in the early 1960s, that the term “graywacke” meant rather different things to different people. Essentially it is a sedimentary rock composed of sand and mud. But some workers liked to emphasise its sorting (poor), others its immaturity (the grains included many feldspar and lithic fragments), or that the grains were angular. But there was also a tendency to link it to an origin. For example this could be in terms of the environment of deposition – graywacke is a typical rock of sequences that are called ‘flysch” , which in turn were conceptualised as part of ‘geosynclines’, and formed in deep-water. Or it could be lined to the actual process of deposition – beds of graywacke often show grading base to top.  Also, which may or may not have complicated matters, some worers lied to refer back to the original ‘type’ locality for graywackes in Germany.

There were calls for the use of ‘graywacke’ to be discontinued, or at least for a definition to be agreed upon. Robert Folk, the guru of sandstone, began using the term ‘phyllarenite’ in 1966.  This was a term, precisely defined by the relative amounts of Quartz, Feldspar and Lithics amongst the sand fraction. He felt that in a purely descriptive terminology, notions of origin, either of location or process, have no place, and because of the lingering link of ‘graywacke’ with origins, it was best to do away with it completely. In his classic text on sandstone petrology (various editions: 1968, 1974, 1980),  announced he would abandon graywacke, except as a broad field term. In a 1970 paper, which was specifically about classifying rocks in New Zealand – a place that could otherwise be known as the ‘Land of Graywacke’, the term is not used at all.

But whether you call them ‘phyllarenites’ or ‘graywackes’, the distinct link with a geosynclinal and/or deepwater origin doesnt go away. It was some years later before the explanation became clear. Phyllarenites’ or ‘graywackes’ – essentially poorly-sorted, immature sandstones, are a common product of turbidity flows, which are a typical feature of deep-water environments along continental shelves flanking active landscapes. New Zealand, which owes its existence to straddling a plate-boundary, is a very active place – and consequently a hodge-podge of rocks, many formed in a deep-water setting. It’s that continuing geological activity that gets those graywacke …. I mean phyllarentite …  cobbles into the potato-patch.

Huckenholz, H. G. 1963: Mineral composition and texture in graywackes from the Harz Mountains (Germany) and in arkoses from the Auvergne (France). Journal of Sedimentary Petrology 33: 914-918.