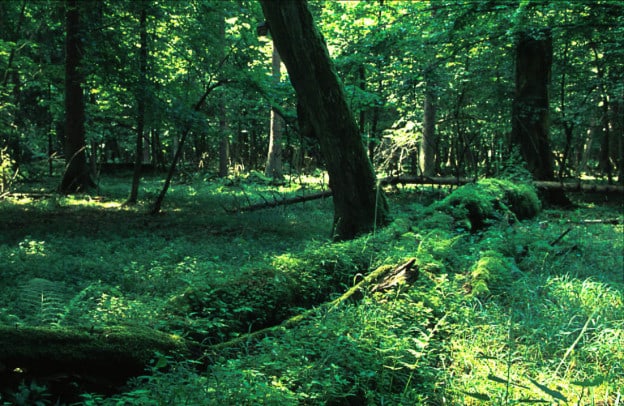 In Poland there are any number of subjects that might make good postcards, Polish girls perhaps. But decaying logs?  In the far east of Poland, this is in fact the case. Białowieża Forest is reputed to be the last, or perhaps the last sizeable ‘untouched’ forest in Europe. Unlike the rest of Europe, where forests are managed to within an inch of their lives, where dead-wood is immediately whisked away or trees cut well before they become dead-wood, a place where trees are allowed to grow old, fall, and rot, is a novelty. So novel that botanists practically burst into tears at the sight, and enterprising locals, aware of this, take photographs of fallen trees and put them on postcards.

A decaying log in Białowieża Forest. This natural process is a rarity in Europe.

Light shines in a tree-fall gap in Białowieża Forest. Beyond – the dark under a closed canopy.

Białowieża Forest is certainly deep and dark. While I was staying at the local Youth Hostel I was joined by a class-load  of Hungarian students. One of their number had left the bus at one of the brief stops, wandered into the forest – and emerged, somewhat shaken, about five hours later. I nearly did the same thing, while wandering the forest tracks toward dusk. I had come across the Polish-Belorus border – a slightly overgrown cut-strip with the remains of a security gate in the undergrowth. The smart-arse thing to do would have been to sneak across, just to say I’d ‘been in Belorus’. But I had no idea what hidden eyes may have been watching me. I was in enough trouble as it was, with trees towering above me in all directions, no clues as to directions, and it was getting dark. Fortunately I chose the correct fork in the path.

Ever since then I’ve mused about what it would have been like to have walked from there to the west, say 7,000 years ago. This was pre-agriculture for this region with the locals hunting, gathering and fishing. Such a walk, so it has long been said, would have been hundreds of kilometres under the canopy of a deep dark forest – broken only by the larger rivers and perhaps some swamps. Or was it? A few years ago a detailed thesis by Frans Vera made a full-frontal assault on this belief, attempting to turn it on its head. Instead of vast tracks of deep dark forest, Vera argued it was mostly an open park-like vegetation. The details of Vera’s hypotheses – and the explosion of responses to it, would make the basis of many posts, but part of Vera’s arguments were specifically based on Białowieża.

Vera pointed to research that plants such as some oaks and hazel – which pollen evidence shows have been part of Białowieża for thousands of years, are no longer regenerating. That is, there is no sign that their seeds are establishing. Vera made the connection between the break down of this process- and the loss of large herbivores in the forest. Until very recently, large herbivores were an integral part of the forest – animals like the extinct auroch, and then cattle. It was only when cattle were excluded that the structure and composition of the forest began to change. Vera argued that large herbivores were needed to maintain a partially open environment with patches of ‘thorny scrub’ that were the only places some tree species could successfully regenerate in.

There is plenty of opposition to Vera’s broader hypothesis, but it seems like the current appearance of Białowieża Forest is unlikely to be ‘primeval’. Rather, as one researcher, Andrzej Bobiec, put it, it is “culturally modiﬁed ancient forest”. In the sense that it has been left to run-wild, with natural processes like tree-fall and decay to take place – Białowieża could be seen as an example of ‘rewilding’. However, this would be to miss the point that by excluding large animals, humans have, oxymoronically, placed limits on wilding. It may be re-wilding, but it’s not a re-turn to the past.

It’s somewhat sad to realise that even this place is not untouched, but we are thankful it exists at all. Białowieża is deep and dark and wild – enough that you can quickly get lost or disoriented. In the deep-down yearning in some of us for the ‘primeval’, perhaps that is what really counts. It’s a place deep dark and wild enough that you can still believe a forest path will lead you to a rusalki sitting on a decaying log. Now there’s a postcard.