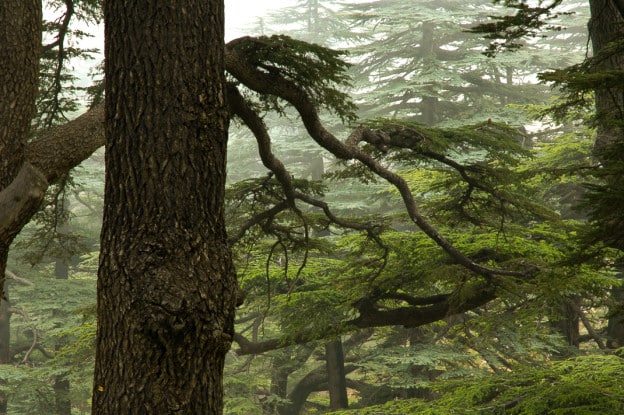 Europe to Australasia is long-haul, and if you are not into heroics, it’s nice to break the journey somewhere. I wonder how many travellers consider Lebanon? The big draw-card for me were the famous ‘Cedars of Lebanon’.  This is a highly relictual patch of trees that is all that remains of a once much more widespread forest.

Yes, I was a tad nervous heading there, but as it turned out, the only ‘excitement’ was on that flight. Two very large gentlemen took a disliking to each other and a punch-up started somewhere over the Mediterranean. The cabin crew, each about a half of the size of the protagonists, were petrified. But quickly, some sort or honour was settled, and the incident died down. We got to Beirut, and, to avoid the usual fleecing by taxi drivers at an airport, I walked a long way into town before starting my bus rides to the north.

In the Epic of Gilgamesh (one of the earliest works of literature, dating to about 1800 BC), the ‘Cedar Forest’ is a central location. The heroes Gilgamesh and Enkidu travel to the forest, where they kill its guardian, Humbaba. In celebration of getting rid of the guy who looked after the place, they cut down many cedars including one which was said to have been truly massive.

The tale is widely thought to be a memory of regional deforestation. In the several thousands of years since Gilgamesh and Enkidu’s rampage, virtually every empire in the Mediterranean-Middle East has mined the cedar forests for everything from boats, buildings, railway lines, or just incinerated them for charcoal. It’s hardly surprising that there aren’t many forests left.

It’s not clear just where the ‘Cedar Forest’ in the Epic of Gilgamesh was located. The Epic itself apparently says “Lebanon”, but there are opinions that what this referred to may even have been Kashmir. However, the most famous grove of cedars remaining today is in central Lebanon. The tiny forest  lies on the edge of the town of Bsharri, on the western slopes of the Lebanon Mountains. It’s possible to fly into Beirut and get to the trees in the same day.

These cedars are Cedrus libani, one of about four species that live from the Atlas Mountains in Morocco to the west, to the Himalayas in the east. The trees that remain near Bsharri, in the grove known as the ‘Forest of the Cedars of God’ are huge, reaching 40 m high and with a massive trunk. One of these specimens appears on the national flag of Lebanon. Unfortunately they have been manicured by chain saw cuts within an inch of their lives. The wood of any branches that fall, or need to be lopped, is carefully used as part of the local tourism craft industry.

It’s difficult to photograph through the trees without catching a glimpse of the mostly bare, poor soils that surround the little patch. These soils are what most researchers regard as what remains after deforestation, over-grazing, and erosion (Try, Montgomery: ‘Dirt: The Erosion of Civilizations‘).

However, there is another view (Davis, 2011), where the “presumed widespread destruction of the Lebanese cedar forests” is actually a ‘Western’ story to facilitate “imperial goals”. According to this, “Contemporary research, …  has undermined this deforestation narrative” . To me, something does not read quite right about it. Some references to research were given that apparently support of this view, so I checked them out.

The critical work is Hajar et al. (2010), who studied the fossil pollen and archaeological record in two places in the Beqaa Valley. One was in the foothills of the Lebanon Mountains and the other was on the opposite side of the valley at the foot of the ‘Anti-Lebanon Mountains’. The conclusions were:  From 8,000 – 3,500 years before the present “major deforestation events on Mount Lebanon are recorded” in the first location. From about 3,500 – 2,000 years ago there was “reduced” deforestation on Mt Lebanon, but forest expansion at the other site. However, from 2,000-1,000 years ago, “on both sites, deforestation and grazing practices are inferred“, following which, into the modern period, there were “increasing human perturbations“.  Their summary diagram (their fig. 5) shows “Cedar forests affected” from earlier times” and then  “Deforestation over Mount Lebanon and Ant-Lebanon Mountain” from 2,000 years ago.

Some expected complexity, but the end result – deforestation. So much for an “undermined” deforestation ‘narrative’ .

From Bsharri a taxi took me over the mountains and down to the Beqaa Valley. It’s only when you start rising above Bsharri and can look back down that you can see have small – how insanely small, the remaining patch of cedars is. It is truly horrifying to think that this vulnerable patch, just a few hundred meters across, is all that remains of a forest that once stretched hundreds of kilometres.

The tiny patch of the ‘Cedars of Lebanon’, viewed from the road going over the Lebanon Mountains.

One small catastrophe; a fire, disease, even break-down in social order with a massive influx of refugees needing wood, and this could go in an instant. And then there would just be disbelief, and perhaps people arguing whether there had been trees here at all.