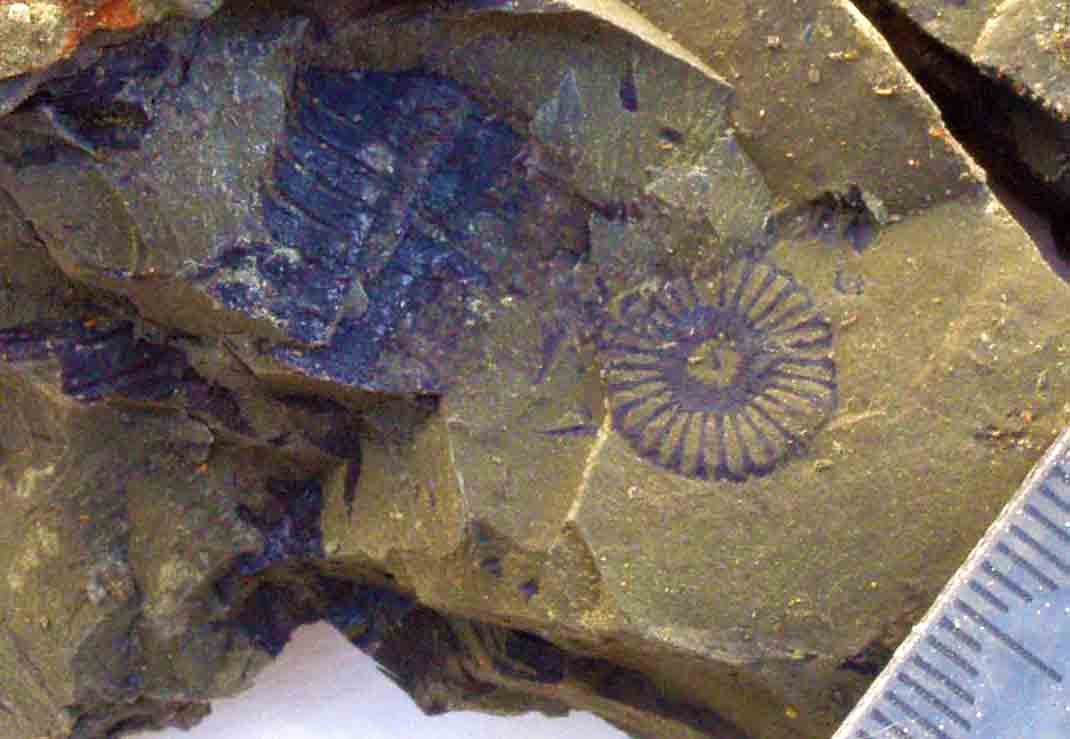 In the Jurassic, New Zealand had ‘horsetails’ (Latin: Equisetum) – an odd-looking plant , a bit like a long brush with whorls of narrow leaves and are related to ferns. Apart from their shape some of the extinct forms had a strange ‘diaphram’ attached to their stems that contained the spores (see the featured image. The wheel-like object to the right is a diaphram, and to the left is a whorl of leaves. From the Jurassic of the Otara coast). But today, New Zealand is remarkable as one of the few landmasses not to have native horsetails. Somewhere along the line they became extinct. Australia, some of the Pacific islands, and more-understandably, Antarctica, are the other areas where they are now naturally absent.

Jurassic horsetails were reported from near Gore by Newell Arber (1917) in the one of the most detailed reports of New Zealand’s plant fossils.  Then, in 1934, Edwards reported that the Rev. J.E. Holloway found Equisetum fossils from “a roadside cutting about half a mile inland from Curio Bay”. I looked for this site back in the early 80s, and although there was a road cut with nice plant fossils at about this location, it did not have horsetails. At least, I never found any. However, I was more lucky at some locations along the Otara coastline – and on the Owaka River, a plant fossil site that Arber knew about, but never found Equisetum.

A mudstone bedding surface covered with fossil Equisetum from the Jurassic of the Owaka River, New Zealand. Scale is about 50 mm across image.

Look at any reconstruction of dinosaurs, and if they are wallowing in a wetland, there are probably horsetails there. They are generally associated with wettish conditions, often with shallow standing water. The Jurassic fossil Equisetum I’ve collected are often in beds by themselves in muddy rock. This suggests they grew in mono-specific stands in quiet marshes. Probably in slightly better drained habitats, they gave way to taller vegetation, such as the Cladophlebis tree-ferns. And in even better drained situations, there was actual conifer forest, such as the Curio Bay fossil forests.

A fossil whorl of Equisetum leaves from the New Zealand Jurassic.

Why did horsetails become extinct in New Zealand? Good question. It surely wasn’t because it got too cold. Today Equisetum grows in the McKenzie River delta, where they are associated with permafrost. And though I think New Zealand went through a dry phase, I doubt if it got that dry.

Research by paleobotanist Carole Gee has indicated that horsetails would have been one of the preferred foods of the sauropod dinosaurs. Equisetum is also well-adapted to re-growing from underground rhizomes, if it is damaged by browsing, or especially in the case of sauropods – by the stomping of very big feet. Perhaps the extinction of dinosaurs tipped the balance against horsetails in New Zealand?

And it;s not as if they can’t grow in New Zealand today. Though we don’t have native horsetails, introduced Equisteum have now become a certified weed!

Links will take you to a downloadable pdf: