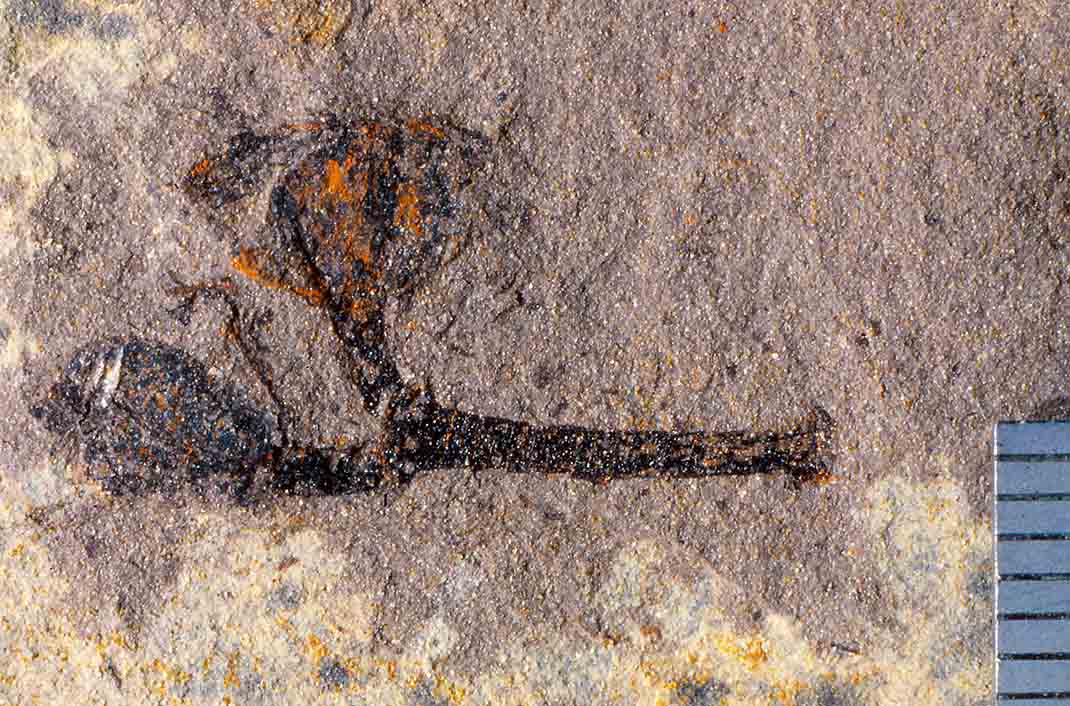 There is a Maori legend than when one of their ancestral canoes (the Te Arawa) approached New Zealand after traveling from its Pacific homeland, its crew saw the trees along the coast covered in red. Thinking these were abundant red-feathered birds, a chief thew away his priceless red-bird feather headdress. When the canoe finally reached shore, the migrants found the red to be flowers of the rata or pohutakawa tree. Nice, but useless to make headdresses out of.

Rata/pohutakawa  (Metrosideros) have a fossil record in New Zealand going back at least twenty million years. Metrosideros leaf cuticle is known from several places of Pliocene and Miocene age (Pole 2007; Pole et al. 2008). In Miocene (Manuherikia Group) sediments of the Bannockburn region (near Cromwell) there are fossil leaves and fruits (see featured image) that are probably also rata or pohutakawa (Pole 1993). To the north, at St Bathans, much better preserved fossil fruits are definitely Metrosideros, and are about the same, Miocene age (Pole et al. 2008).

DNA of Rata/pohutakawa from New Zealand and throughout the Pacific has been analysed to figure out their relationships (Wright et al., 2000). The conclusion was that New Zealand seemed to be ancestral, and relatively recently. The Metrosideros in the Pacific were likely all descended from plants that came from New Zealand in the Pleistocene (the period covering the ‘ice-ages’). The surprising part of this result was more the timing – given that ratas and pohutakawas had been living in New Zealand since at least the Miocene – what stopped them from dispersing through the Pacific much earlier? The researchers hypothesised, reasonably enough, that it was something to do with the ice-ages, and most likely their effect on the pattern of winds over the New Zealand/Pacific region.

Metrosideros on Lord Howe Island (Balls Pyramid in the background).

They (Wright et al,. 2000) cited studies which suggested stronger westerly winds over New Zealand, at least during the later part of the last glaciation, which possibly extended a bit further north, as well as reduced easterlies in the tropics. They noted that contemporary El Nino events can have the same effect. These, they suggested, may have been the conditions  allowing Metrosideros to finally break out of New Zealand and disperse through the tropics.

However, more recent work suggests reduced westerlies over New Zealand during the Last Glacial Maximum (e.g. Lorrey et al. 2012). Some suspect increase southerlies, but overall – still a predominant westerly flow. This is where I get lost. Stronger westerlies, weaker westerlies westerlies of any kind, would blow seeds east. Not north. This is a long way from gales blowing seeds north-east, perhaps first to the Kermadecs, then on to Tahiti (from where the tropical easterlies could disperse them to the west). So while I think Wright et al.’s finding that rata and pohutakawa have recently spread through the tropics interesting – I’m a bit puzzled by the mechanism. Note the Chatham Islands are east, and, weirdly,  they don’t have Metrosideros (Dawson 1991).

But how did Metrosideros get to New Zealand in the first place? The simplest answer is that it evolved there. But this begs the next question.  Rata and pohutakawa are members of the Myrtaceae family. Further back in time from the Miocene, Metrosideros has not been found as fossils. However, Myrtaceae pollen is well-known in New Zealand from the Oligocene, Eocene and Paleocene (Mildenhall, 1980). It’s not easy to distinguish the various types of pollen, so perhaps it  includes rata and pohutakawa, perhaps not. But back in the Late Cretaceous – the time New Zealand was becoming isolated from Australia and Antarctica, there is no Myrtaceae pollen known at all from New Zealand (or Australia for that matter). My bet is that not only were rata and pohutakawa not in New Zealand that long ago, but neither was the entire family.

It’s therefore likely that the Myrtaceae arrived in New Zealand across the sea. Blown there from Australia by westerlies? Drifting  across the water (perhaps on rafts of vegetation)?  Somehow stuck to birds? We don’t know.

Getting back to that Maori legend – it’s a nice story, but those first people in New Zealand are thought to have most likely come from the Cook Islands or the Austral Islands. Metrosideros grows in both of those places. So those first Maori are likely to have been familiar with its flowers,  although perhaps not with them on trees right on the beach (to them it may have been a mountain cloud forest tree).

There’s no doubt how the first Polynesians got to New Zealand – it was in a canoe. They didn’t blow through the air, or simply drift. But Pacific canoe travel is heavily dependent on wind, currents help, and of course, there’s elbow-grease. There are now good grounds for thinking that the colonisation of New Zealand was aided by particular wind patterns. During certain ‘windows’ of time, these shifted to favourable positions or strengths to get between various points in the Pacific. These patterns were related to El Nino events, which were in turn a response to climate change over the Medieval Climate Anomaly 700-800 years or so ago (Bridgman 1983; Anderson et al. 2006; Goodwin et al., 2014).

So now we have El Nino being held to account for biota getting both from New Zealand to the Pacific- and in the reverse direction! Possibly no reason why this can’t be the case. The wind patterns are complex, but I wonder if Metrosideros was a Pacific wanderer long before the Ice Ages, or Polynesians?

Links will take you to a downloadable pdf.

Bridgman, H.A., `1983. Could climatic change have had an influence on the Polynesian Migrations? Palaeogeography, Palaeoclimatology, Palaeoecology 41, 193-206.