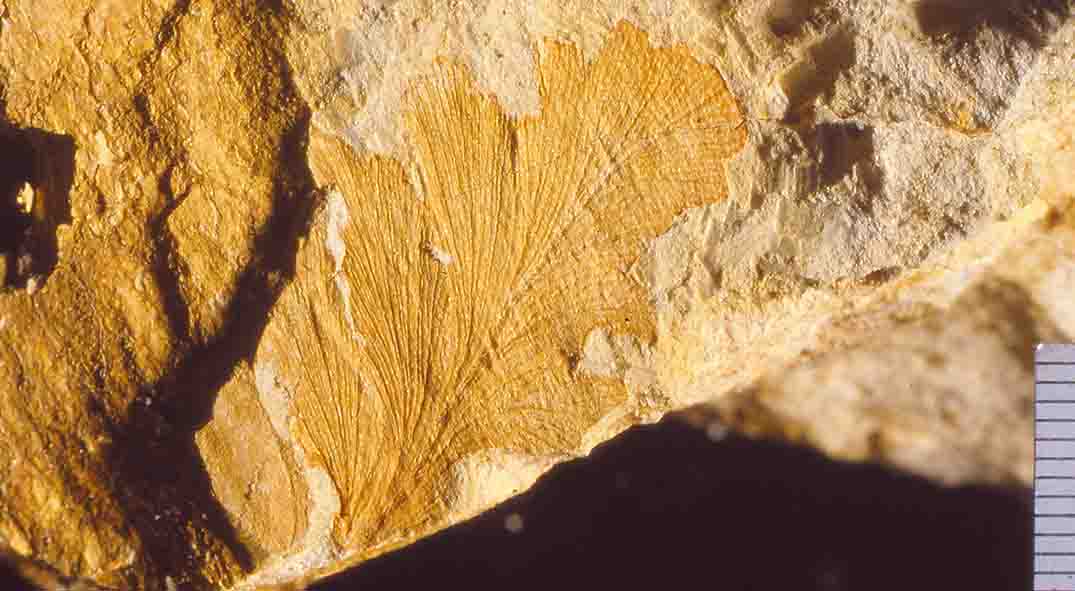 A rare plant fossil in the Miocene Manuherikia Group of New Zealand, is Phyllocladus (the Celery Pine). This is a strange conifer which, instead of leaves, the adult plant has multi-veined flattened branches that are called phylloclades. With these phylloclades, the average person would scarcely believe Phyllocladus is a kind of conifer (very broadly, a pine). But it is common in some parts of New Zealand today (typically in ‘difficult’ places, cold, or with poor soils) and also in Tasmania and Malaysia.

Fossil pollen suggests Phyllocladus has been in New Zealand since the Eocene (Mildenhall 1980). There are somewhat similar, but older pollen records,  for example from New Zealand’s Late Cretaceous (Couper, 1953; Cookson & Pike, 1954) but these are likely to represent something distinct. Despite conifers being very diverse in the Miocene St Bathans Paleovalley sediments of the Manuherikia Group,  Phyllocladus appears to have been absent there (Pole 1992a, 1997, 2007). The climate may have been so warm, and the soils rich enough, to preclude it (Pole 2014). However, Phyllocladus is present in the Miocene Nevis Oil Shale (Pole 1992, see figured image), which was deposited in very different conditions (Douglas 1986). There are hints from the Nevis, including large fossil legumes (Pole et al. 1989, 1992b) that the climate may have had a distinct dry season. This may have favoured Phyllocladus. DNA evidence suggest the extant New Zealand species only radiated in the Late Cenozoic (Wagstaff, 2004), and there are certainly Phyllocladus fossils from this time (e.g. From Mataora, in the Coromandel. Pole and Moore, 2011).

Phylloclades appears to be a strategy to increase light-intercepting area beyond that of typical, simple, needle-like leaves ( e.g. Brodribb 2011). In essence, Phyllocladus is trying to become more like the broad leaves of typical flowing plants, in order to compete with them. Separate from that hypothesis, there seems to be an unstated assumption – that the world’s forests became darker, shadier places, with the evolution of broad-leaved flowering plants. But did they? Conifer forests can be damned dark under the canopy. An individual pine needle doesn’t create much shade, but a whole lot of them do.

In one of the places I lived in for a few years in Brisbane, my neighbour on the opposite side of the street was Ray Specht. There was a big Eucalyptus tree growing between his house and mine. Ray happened to be one of the most influential people in Australian botany. For example, the various schemes of Australian vegetation classification mostly stem from him. On visiting Ray, the conversation would usually quickly go to the 1948 American-Australian Scientific Expedition to Arnhem Land, which was clearly a highlight of his life.   Ray would expound on the expedition until his wife would look up from her book and go “Oh Ray – shut up!”  Then, fascinating as the Expedition was, I could get him back to what I really wanted him to talk about – his views on how vegetation structure could be predicted from basic environmental properties.

One of Specht’s understandings was that the amount of shade under the canopy of a forest was fundamentally determined by the environment. Basically, closed canopy forests (like rainforests) are more open underneath the canopy, whereas open canopy forests (like Eucalyptus forests) have a denser zone of shrubs. Down near the ground, things even out. There are no doubt plenty of botanists who might take issue with the details, but I find it a valuable insight. At least in Specht’s view, given the right environmental conditions,  forests would have been just as dark and shady before flowering plants evolved, as after.

I’ve wondered if any other fossils might be helpful. In fact, there is a fossil plant with the intriguing name Protophyllocladus has long been known from Cretaceous rocks right across the Northern Hemisphere. In terms of gross morphology, it has phylloclades uncannily like Phyllocladus. However, their detailed structure,  and its affinities, have remained unclear up until very recently. But in 2014 the Russian scientists Natalya Nosova and Lena Golovneva from St Petersburg made a detailed study of the fossil epidermis of Protophyllocladus and compared it with Phyllocladus (Nosova and Golovneva 2014). They concluded Protophyllocladus was a conifer, and likely in the same family as Phyllocladus (the Podocarpaceae).  Protophyllocladus is much older than Phyllocladus, but it still comes from a time when flowering plant forests had spread across the Northern Hemisphere (see fig. 7 in Pole et al. 2016). In that respect, it is consistent with the idea that phylloclades evolved in response to the spread of flowering plants. If fossils of conifers with phylloclades turn up from pre-angiosperm times, then Spechts’ ideas should be looked at closely.

Lightening, so it is said, never strikes the same place twice. But of course, we know this is wrong – lightening does hit some places multiple times and even the odd person has been struck more than once. I think of evolutionary developments as a bit like lightening striking a particular place (a new morphological feature evolves), but just occasionally, it strikes there again (and a similar feature evolves in another lineage. The technical term for this is ‘convergent evolution’. I suspect the phylloclades of Protophyllocladus and Phyllocladus are convergent evolution.

And that big Eucalyptus between my place and Ray Spechts’ ? According to him – it had been hit by lightening at least three times.