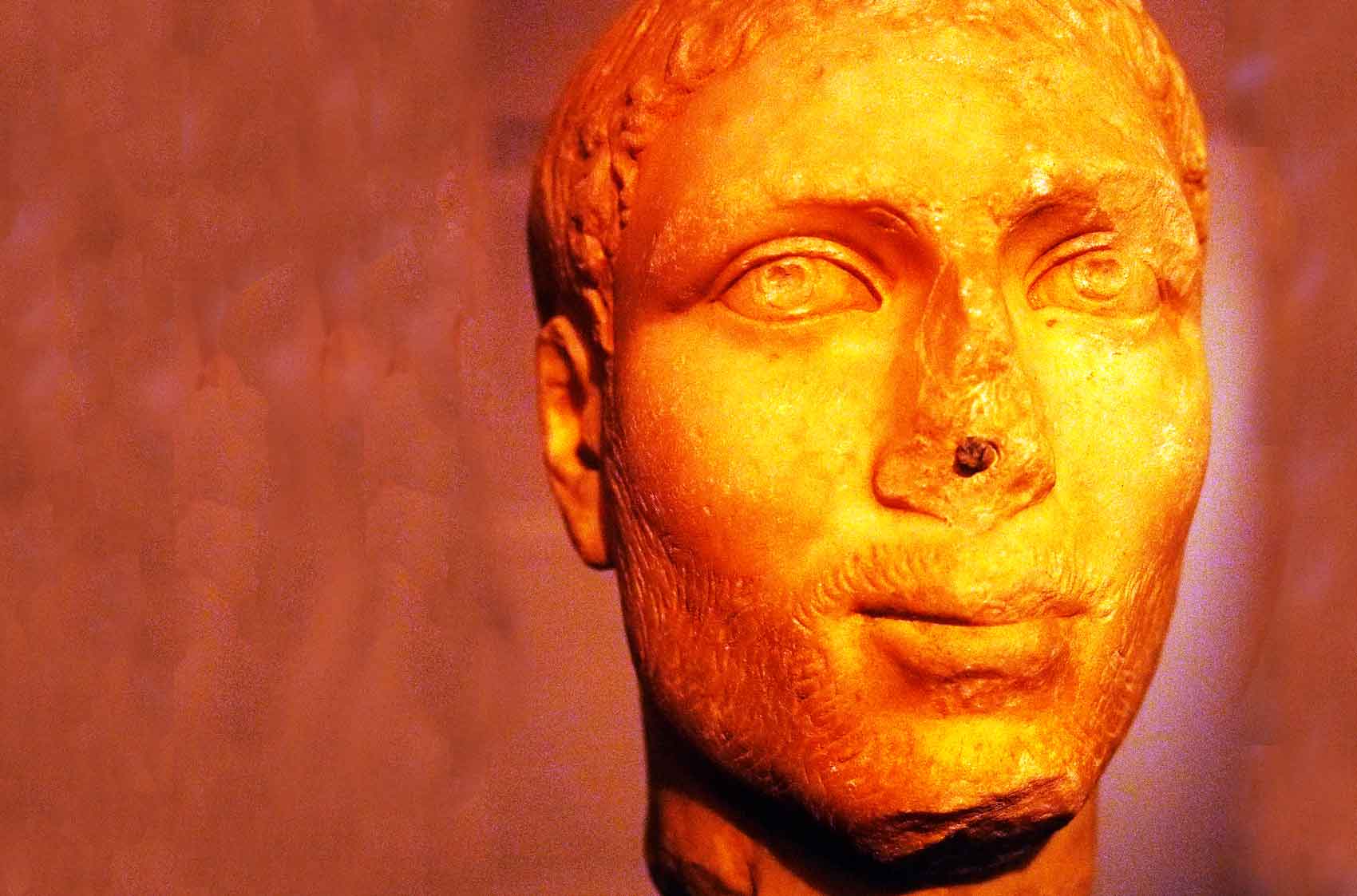 You’d have to really dislike someone to bash a nail up their nose.

The day before Wanaka’s Alchemy Cafe closed because of the flooding, I was sitting there, watching a doco on YouTube: ‘A Troubled Island – The Minotaur’s Island’, about ancient Crete. I generally avoid archaeology videos because they normally seem desperate to gravitate towards ancient astronauts. Maybe I watched because it was about Crete – I had been on nearby Thera (Santorini) a few months earlier, or maybe it was just because of Bettany Hughes. But despite her narration, I flicked-forward through most of the doco until the last quarter caught my eye. There was Bettany looking at the reconstructed small statue of a boy from the Minoan Bronze Age, exquisitely carved in hippopotamus ivory, but which had had its “face sliced off” and mutilated in other ways. It came from the Cretan town of Palaikastro, where its excavators determined it had been deliberately “smashed into hundreds of pieces, spread over two areas 10 meters apart”. The shrine where it probably stood, likewise had been deliberately burnt. In Bettany’s words, the statue had likely “provoked in someone, a passionate hatred”.

Her narrative was that the massive volcanic explosion on the nearby island of Thera (Santorini, about 1642–1540 BCE), had so disrupted society, that some people had lost faith in the gods. As Bethany put it, the eruption and subsequent tsunami, was a “spectacular failure of the goddesses to protect Crete” and “may have brought more fundamentalist instincts to the surface”. A “break-away cult”, worshiping gods, rather than goddesses, may have resulted. The scorned women may have subsequently taken it out on the upstart male-worshipers, by smashing their artworks. This scenario, especially the bit about the face being sliced off, immediately rang a bell for me.

While I was travelling in Europe this year, the ‘Museum History Guy’ Damien had blogged about a book, Catherine Nixey’s ‘The Darkening: The Christian Destruction of the Classical World’. He made it sound so interesting that I decided to read it on the road. A central point of the book is that there is a current myth that Christianity was responsible for saving much ancient knowledge. This view is central, for example, in Thomas Cahill’s book “How the Irish Saved Civilisation’. I guess by dint of being over half Irish myself, this sounds rather cool. It’s probably true, but it masks a deeper truth – that over a much broader field – early Christianity went out of its way to smash as much as it could of the world it was desperate to replace. Everything old became an ‘Other’. Temples were leveled, libraries burnt, and statues were smashed – or at the very least, had their noses broken off. It was in one of these events that the polymath Hypatia, a woman born around AD 350–370, was murdered by a mob. Wikipedia described her as a “philosopher, astronomer, and mathematician“. She sounds like an amazing woman, and in response to a question by Content Catnip, I nominated Hypatia as one of 5 people (famous/not famous, dead or alive) that I would have at my house for a dinner party.

Having just read the book, and still bouncing from one European museum to the next, I went on the look out for clear evidence of defaced statues. My last city, before flying home from Amsterdam, was Hamburg. After several visits over the years, I’d only just found out (thanks to Natalie) that the city does house a superb ancient art/archaeology collection – in its ‘Museum für Kunst und Gewerbe’ (The later bit translates as ‘Arts and Crafts’, which is what had thrown me off the trail). So on a rainy Hamburg day, one that culminated in something like a minor hurricane passing through, I finally came to see what they had. Among hundreds of other awesome treasures in the museum, a corner room had an exhibition of carved Roman portraits. I didn’t count them, but I would guess it had about 25, men and women, all beautifully rendered heads in limestone. Some were famous and named, others not. But perhaps a third of them – had had their noses belted off.

However, one of the heads stood out as an apparent display of sheer nastiness – not only was the nose broken off, but what must have been an inch-long metal nail had been smashed obliquely into the man’s nose. The museum label made no mention of this, stating simply that it was a “portrait of a man’, and likely dating from the mid third century AD. But it did add that this was a “time of major crises”.

Part of me really hoped this was not what it clearly seemed to be. Was there any way that this was not something nefarious? Specifically (clutching at straws here), I wondered if, in the days before super-glue, the sculptor had made a mistake. Perhaps, after months of painstaking work on this thing, it was finished, and ready to hand over to the rich client the next day. A little drink was in order, but while admiring it, the sculptor had thought …. “Hmmm, maybe I just need to take a fraction more off that nasal labia …..”

A slightly mis-judged tap, and then an awful lot of very blue Latin, following which an enraged and inebriated sculptor with a hammer tried to fix the problem with a nail.

Museum Curator Guy Damien took one look at my photo and figured: “Magic” – the nail up the nose was likely someone trying to symbolically kill this guy. So what was going on here was essentially an extreme version of what had happened to so many of the other portraits in that collection. This guy really had provoked “a passionate hatred” in someone.

I found ‘The Darkening‘ profoundly depressing. It’s not about Christianity of course, but over time, the ultimate fate of so many of Earths treasures is probably not to be knocked around in an earthquake, but to be smashed by some group with profound intolerance and the notion that they have the one and only true way.

The Darkening describes Roman officials who were bending over backwards for excuses not to execute Christians, who were, Hell-bent (is that the right phrase?) to become martyrs. For their part, the Romans were polytheistic – they had a whole bunch of Gods. They were quite happy to simply add the Christians god to the list. But a large number of early Christians would not have a bar of this. It was their god or none, and they were willing to die to make this point. Incredibly, it was the Church that stepped in and said enough is enough – you will no longer become a martyr if you die in this cause.

Still, nearly 3,500 years after the smashing of the Cretan statue, and nearly two thousand years after the wave of early Christian vandalism, we’re seeing the same stuff. Arseholes blow up magnificent giant Buddhas in Afghanistan, sledge-hammer priceless works of art in Syria’s museums and bull-doze the ancient city of Palmyra. I saw what I suppose were the results of the same mind-set in the ruins of Iran’s ancient city of Persepolis. Many of the carved figures had had their faces hacked off. I presume this defacing dated back to the invasion of Persia by Islam centuries ago (in AD 651). I also heard that after the more recent Islamic Revolution in Iran, there were people newly come to power that wanted to obliterate Persepolis once and for all. Fortunately cooler (and I would say, more typically Iranian) heads prevailed.

What to make of all this? Most of us will have grown up with the notion that polytheism = bad, monotheism = good. Or at least that there is a natural, ‘correct’ advance from the one to the other. However, I now have a slightly new take on the word ‘monotheism’ (entirely distinct from beliefs taught within those religions) – it seems awfully close to ‘intolerance’.

You can watch that Bettany Hughes video on ancient Crete here: