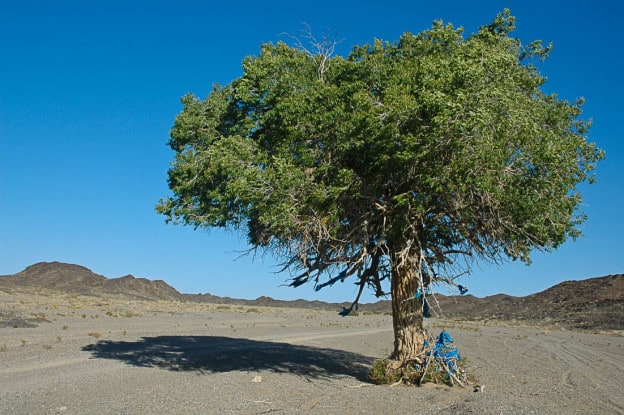 When an entire landscape loses its forests, it can be so complete that most of us would have no comprehension of what had once been. The trees are cut down, or burnt, the soil washes away … and the very evidence has been obliterated. For this reason the odd ancient tree or patch of original vegetation are to be treasured.

I grew-up in a semi-arid, naturally treeless part of the world – Central Otago, New Zealand. Well, actually not quite naturally. When the first European settlers came in the 1850s, it was covered in tussock and scrub. They planted poplars and fruit trees and slowly, parts of it became a treed-landscape. But there are tantalising scraps here and there that hint that the mountains and valleys, well before those settlers, were forested. They are tiny relicts of the former vegetation, sometimes just single trees, and usually in the most fire-protected spots of the most rugged areas.

When I worked in the Gobi Altai in Mongolia (the mountains to the north of the Gobi Desert) I was immediately intrigued with the similarities to my New Zealand home. It’s the same kind of landscape, the same colours, sometimes the same sky – but on a vastly larger scale. It’s Central Otago ten or a hundred times bigger. Like Central, it’s virtually treeless. But now and again there is a little green, a patch of forest surviving in a remote gorge, or almost incredibly isolated trees in the arid lowlands. After weeks at a time of not seeing plants higher than me, trees were always worth a look and some photos. This is a brief introduction to some of what I’ve seen.

A lone larch tree on a ridge in the Gobi Altai mountains.

Another isolated larch tree, high up a valley.

In the mountains the trees are always larch – a deciduous conifer, green only in the brief Mongolian summer.

One of the small forests still remaining in the Gobi Altai. For several weeks my camp was in the distant foothills.

Inside the remaining larch forests – a welcome change from the bare rock.

Not far from the track a few kilometres from one of our main camps – was this ridiculously small patch of willows. It is the only patch of trees for a huge distance around. The special place was recognised by someone, years ago, who made the effort to fence it off and protect it from the goats. Alas, the fence needs a little attention.

A minute patch of stunted willows – the only trees for tens of kilometres around one of our camps.

The highly coppiced trees inside the patch – and a fence – the remains of someone’s attempt to preserve the trees.

Some of the larger rivers have a few patches of trees along them. At the edge of the mountains these may be larch, but willow is more typical in the open country.

Between a rock and a hard place – larch trees on the edge of a dry river bed.

A nice patch of willow along the river edge by the town of Bajanhongor.

Now and then you come across amazingly isolated trees, in the middle of what you thought was pure desert. The Mongolians recognise these as ‘ganzmut’ (single-tree) and they are often revered as special by Buddhists. Some of these are elms.

A single tree in the middle of no-where. The blue material indicates it is a special tree for Buddhists.

The last tree. From here on south – the Gobi Desert proper.

These remaining trees speak of what was – but importantly, what could be. The fact of their existence, however tenacious, shows that they can grow in this incredibly harsh environment. At one stage the Gobi Altai were probably covered in larch forests, and there were likely large patches of broad-leaved forest in the lowlands. All sorts of things would change with reafforestation – slow run-off would mean that rivers that now only flash-flood may flow throughout the summer, the forests themselves may have an ameliorating effect on the climate, and there could be a sustainable supply of wood for building and fuel.

It would take some special people with a bit of vision. Fortunately there are a few such people, and I’ll mention them in a later post.