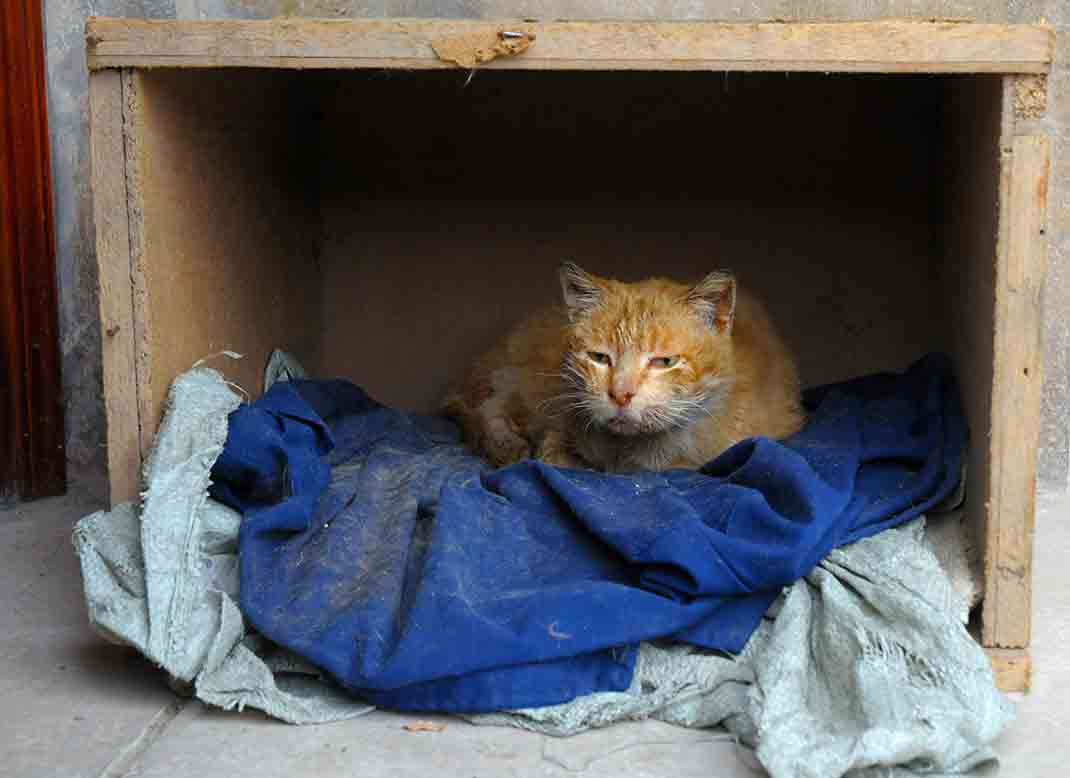 The Nanjing Institute of Geology and Paleontology has cats. There’s at least a dozen of them, if not 15 and more. Hard to tell exactly because of the clone of dirty white ones among them. Though at least one of them is (probably) unique in having David Bowie eyes.

Some of the Institute cats lounging on the front entrance.

NIGPAS is a special part of Nanjing. It feels like a hidden corner that has been secluded from the rampant rebuilding outside the gate. It’s old building are nestled among trees, there are birds, and of course, those cats. When I arrived I was asked not to feed them. Some other professor had, and they would come inside with their “fleas”. I said I wouldn’t. The cats were under threat of removal. This had happened at another Chinese university – and the authorities were faced with a near student-rebellion. The powers that be had gotten their way. That cats disappeared, but the students had made a point that was heard more widely. At NIGPAS, there is an uneasy truce, and I think at least two people come to feed the cats, regularly. Mostly a bit after dark, the cats are waiting for their handfulls of dry kitty-bickys.

My apartment is about 15 minutes walk away. It’s a bleak 17 story block with a tiled court where the tenants park their scooters. Not long after I arrived a wretched orange cat in trouble appeared. She was near to having kittens and desperate for food. Some of the tenants started feeding her. She gave birth to five or six kittens, and they lived under the apartment block, coming and going via a narrow gap at ground level.

The kittens in a cardboard house made by one of the tenants. A week or so later at least two, and possibly all were dead.

The mother eventually disappeared, but three remaining kittens were pampered. A variety of tenants fed them, made houses out of boxes for them. Whole families would gather in the afternoon and the kids loved to watch them play. Despite a few months of attention the kittens would never let anyone get near enough to touch them. Something deep inside told them to dash back into their bolt-hole if anyone came too close. But they grew, and so did their houses. When rain destroyed the cardboard carton houses, new ones always appeared. Finally someone found some wooden ones.

Then, I noticed the cats had gone. One morning, after a couple of cat-free days, I spotted one in the wooden ‘house’. It didn’t move, and, puzzled, I patted it. Strange, it seemed to enjoy it. When I came back in the early evening, the cat was still there. But this time it wasn’t enjoying anything. It was clearly not well. I went up to my apartment and then popped down half an hour later. A woman had just loaded the cat into a cage and wedged this onto the floor of her scooter. She said she was a “volunteer animal carer” from our apartment – and that the cats had been poisoned. It wasn’t clear if this was deliberate or not, but the cats never strayed far and I’ve never seen a mouse or rat, so I suspect it was. She took the last cat to a vet and I never saw it or the woman again. The cat houses eventually disappeared and our apartment block returned to the same soul-less place it had been.

Winter came, with night-time temperatures dropping below -10C. There was an orangey cat who lived apart from the main mob at the Institute. Let’s call him ‘Rat Bag’. He was skin and bones and his days were spent crouching on the concrete with his head hung. If you walked past he would lift his head and follow your movement, silently scowling. How he survived, I have no idea. There were about three or four spots he would move between throughout the day, but his nights were spent on the balcony of an empty building.

As the coldest nights came on, I noticed that Rat Bag had not moved from this balcony. Perhaps three days had passed, with him simply hanging his head on the concrete in a spot totally exposed to the sub-zero winds. I taped some cardboard sheets together, wrapped a towel around them, and got a little food. Rat Bag devoured the food and allowed me to slide the pad under him. Next night I bought a hot water bottle. I popped it on the pad and Rat Bag’s reaction was to silently squeeze his head under it.

The winter dragged on, but each evening I brought a hot water bottle and in the mornings a little food. Rat Bag had made the pad his place and wasn’t quite so skinny anymore, but his nose leaked and he sneezed (Definite hand-washing after). Then, one morning,when I came, he meowed, walked toward me, and curled up at my feet. I was kind of stunned – it was a complete change of character. In all the weeks over winter, he had accepted my presence more because he couldn’t afford not to.

Winter passed to spring, but a bitter wind came one night, and next day I found Rat Bag’s pad had been shifted to a sheltered corner of the balcony. This was a good sign – someone else was looking out for him. A few days later I met a new addition to the few westerners at the Institute – an Italian. Turned out he had spotted Rat Bag, and moved his pad to the sheltered spot. We visited Rat Bag together and found someone had pinched the hot water bottle, but left its cover. I guess their needs must have been more.

On our field trip earlier in the year my colleagues had some wooden cartons hand made to ship our fossils back to Nanjing. Having done their job, the boxes were all discarded. Being a kiwi I thought this was a bit of a waste and kept one, figuring it “might come in useful later”. It did. One day I slid Rat Bag’s pad inside, and he’s cool with that (see the featured image).

Rat Bag fleshed out a bit. He still makes his rounds between his favoured spots. There’s the middle of the road. Or somewhere in a huge and growing pile of rubbish (don’t ask). And sometimes a roof. In the warmth he spreads out now, in poses that suggest he is actually enjoying life.

Did I say I promised not to feed the cats? I forget.