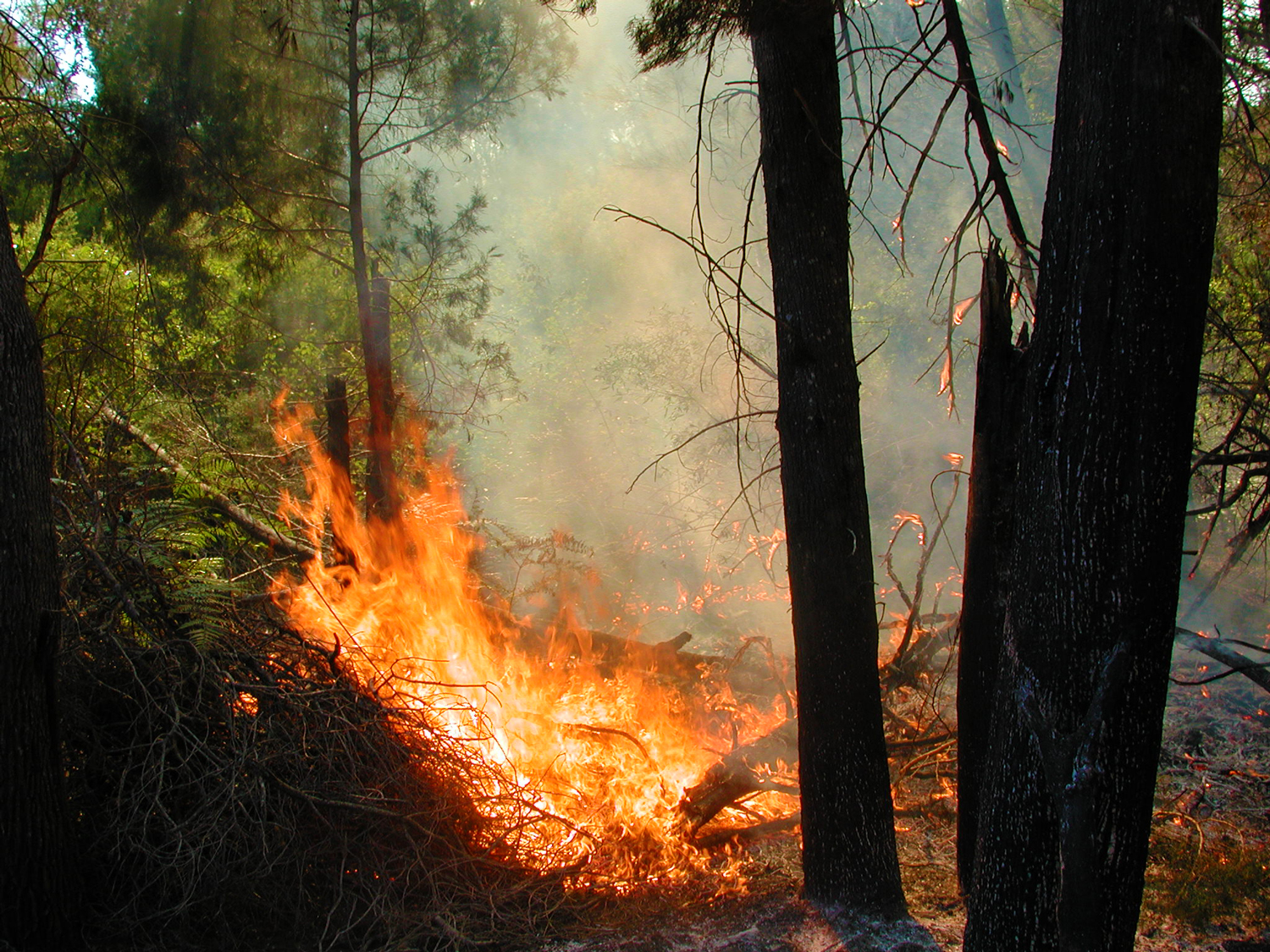 Once again, the south east of Australia has had huge fires. But how can this be? Atmospheric carbon dioxide levels are rising, carbon dioxide is ‘plant food’ and apparently the result is ‘global greening’.

The greening phenomenon is actually real. Studies have shown that world vegetation has thickened, and that some of this is due to more carbon dioxide (Zhu et al., 2016). However, there are recent indications that at least globally, this may have leveled off. Carbon dioxide is indeed plant food and its ability to ‘green’ might sounds like a boon. However, it’s not, as some are fond of saying, “only plant food”. Its long-known optical qualities means it also has an effect on climate. More of it will not just increase global warmth but also change weather patterns, so that while most areas get warmer, a few get cooler (for now) and what used to be normal rainfall suddenly isn’t.

Despite global greening, Australia is not becoming (and is unlikely to become) the verdant paradise that a naive interpretation of the phenomenon might imply. In Australia, more plant growth typically means – more fuel for fires. This point has rarely entered the furor over the last few days, certainly not by those who don’t believe in any climatic link between rising CO2 levels and what appear to be increasingly bad forest fires. Instead, much ire has been directed against a perceived failure of ‘control’ (or ‘hazard reduction’) burning to reduce that fuel load.

As Bill Gammage documented in his book, ‘The Biggest Estate on Earth’, Aborigines may well have accumulated 70,000 years (or something like that) experience in skillfully maintaining their land with controlled fire. However, after all that time, a couple of hundred years ago, and in the place where the experience is now needed the most (in what Steven Pyne described in his book, ‘Burning Bush. A Fire History of Australia’, as the ‘fire flume’ of south-eastern Australia), those generations of experience were snuffed out. That precise knowledge – knowing where a fire will go, how far, and where and when it will die out, has to be re-learned. It can only be gained by people intimately familiar with their patch of landscape. It doesn’t work, say, where a rookie is sent to a national park as a ranger, then a couple of years later, shifted somewhere else.

So, amid all the shouting for more control burning, spare a thought for the poor sod who actually has to do this. That’s the person on the ground who, when about to put a match to vegetation, has to worry about whether she or he will end up on prime-time TV (when the controlled burn became uncontrolled). The last things we need are fire managers under pressure to ‘burn it’ just because there’s a lot of people screaming that it’s the right thing.

Yes, if Australians want to live safely in places surrounded by Eucalyptus forests, then maintaining those forests by skillful control burning is one way to reduce the danger. Yes, we probably need more of it, but for a slew of reasons (the most cock-eyed of which is that the ‘Greens’ are somehow the power behind the throne), the system is never going to be perfect. Research by James Furlaud, Grant Williamson and David Bowman, summarised in an article in The Conversation, noted that “nearly a third of [Tasmania] would have to be burned to effectively lower the risk of bushfires.” For reasons including economics and human health, let alone the wildlife, that seems unreasonable.

Furthermore, control burning is a process that needs negotiation between a variety of ‘stake-holders’. Do some of those yelling for more control burning but with … less control, realise what they are arguing for? Do they wish for more centralised government power so that fire managers can burn wherever (yes, this would include private property) they want, whenever they want? Suspect not.

It’s not as if the relevant authorities are not control burning. Within the resources available, they have programmes for this. The NSW Rural Fire Service has a web page where they indicate the locations, tenure and total area of what they plan to control burn and when they want to do it. This is a commendable use of modern technology, although the problem with these maps, is the potential to backfire (so to say). Viewed in isolation, or against maps showing the vast areas which have just burnt in uncontrolled fires – the control-burn areas look pitifully small. Perhaps it’s time for the government to fund someone to take this website to the next level – to show the history of control burning efforts? It might even be expanded to allow some sort of feedback, where the public can indicate some areas that seem overdue for a burn (and allow authorities the chance to explain why it hasn’t happened).

If you can stomach the language being spat out at various categories of ‘other’ (greenies, lefties, progressives, climate martyrs, cute Norwegian girls with pig-tails) on the website ‘Quadrant online’, you can come across posts with the odd more thought-provoking statement. Roger Underwood’s piece, ‘What California’s Fire Follies Can Teach Us’ argues that:

“blaming climate change is not only simplistic, but unhelpful. This is because it distracts attention on what to do right now to ensure the killer bushfires do not happen again next summer”.

I see this as a false dichotomy which confuses two time scales of the problem. In the short term, management issues, like control burning, matter a great deal (although as Furland et al’s article pointed out, we expect far too much from it). But ignoring the longer-term climate change is unhelpful too. Underwood’s use of “simplistic” suggests that some people ‘simply’ blame climate change on California’s fires, and by extension, Australia’s. But this is a straw-man, no one who knows what they are talking about does this (Underwood points out that America’s ‘Smokey Bear’ policy has a lot to answer for, but this is widely-recognised as contributing to California’s problem). Australians who would prefer that their government did not facilitate the export of coal know damned well that this will not reduce the fire risk to their property next year, or even ten years from now – and certainly not before next week, when Australia’s weather patterns might once again configure to produce a really bad time in the south east. They would just rather not be part of making it worse.

So where are we in the link between carbon dioxide and more extreme fires? Other than fuel levels, fire danger comes down to temperature and moisture – and the way these combine to produce a drought. Australians know that “Australia has always had droughts”. They don’t need their intelligence insulted by having this inanity repeated over and over (as it is). Instead, to make progress means getting past the over-generalised term, ‘drought’. In 2004 Neville Nicholls analysed historical data and concluded that, based on a simple rainfall definition of drought, the Murray-Darling Basin had seen similar droughts to now in the past, such as the Federation (1895-1902) or World War II (1937-1945) Droughts. However, over this time there has been a persistent warming trend across the Basin, virtually certain to result from the global warming effects of increased greenhouse gases. The warmer air increases evaporation, and therefore the effects of drought – even if rainfall itself does not vary.

In other words, a realistic definition of drought must now include temperature. Once this is recognised, it seems that there has been a trend in the character of Australia’s droughts. For example, in 2010 Bertrand Timbal and colleagues concluded that “the duration of the current drought is unprecedented” and that “across SEA, every year from 2001 received rainfall below the twentieth century (1900-1999) climatological average. The likelihood of observing such a long sequence of dry years by chance is less than 0.5%”. They also concluded that “the current drought is clearly linked to global warming through the strengthening of the STR” (Sub Tropical Ridge, the belt of high pressure cells which result in clear skies).

Not only this, but historical droughts appear to have been caused by quite different climate scenarios. Timbal and co. noted that while there is currently a drought in Australia’s south-east, much of northern Australia is getting more than usual. This contrasts with the WWII drought – which covered most of Australia.

In other words, it may no longer be excusable to uncritically compare previous Australian droughts – because they were different beasts. The current ‘Big Dry’ Drought (1995-) is remarkable – and by implication, south-eastern Australia’s fire weather is likely to be in new territory as well.

Fifteen years on from Nicholls’ work, there is more progress on what drives Australia’s strongly cyclic rainfall pattern – it is driven by the backward and forward sloshing of hot and cold water across the surrounding ocean basins. This is cyclical behaviour too, and underlies the hope that each drought will get broken by a flood, like it eventually always has. But superimposed on this cycle, is a trend. For example, Caroline Ummenhofer and seven colleagues asked, “What causes southeast Australia’s worst droughts?” They found that the strongest determinant of Australian drought, is the ocean water around India – the Indian Ocean Dipole (IOP). When Indian Ocean water was warm in the east, but cool in the west (in a ‘negative phase’), southeast Australia tends to get rain. Any other configuration (neutral or positive) it tends not to.

Global warming is pushing up the overall water temperatures around India, although its effect on the frequency (if any) on negative IOP modes remains unclear. But positive IOP modes have trended upwards since 1950 and appear to correlate with “significant fire seasons” in Australia’s southeast (Clarke et al., 2013; Cai et al., 2009). However, there are links between the IOP phase and the El Nino Southern Oscillation of the Pacific Ocean, which in turn may be responding to global warming. Global warming is also intensifying the Sub Tropical Ridge, and shifting its average location.

It’s these long-term trends: temperature, some components within the catch-all term ‘drought’, the realisation that vegetation ‘greening’ has a sting in its tail, and the increasing understanding that they are all driven by greenhouse gas levels, that make Australia’s future of drought and fire especially alarming. However, in the short-term, it will only be a matter of days before the weather circulation patterns again contribute to a ‘perfect storm’ in Australia’s south-east.