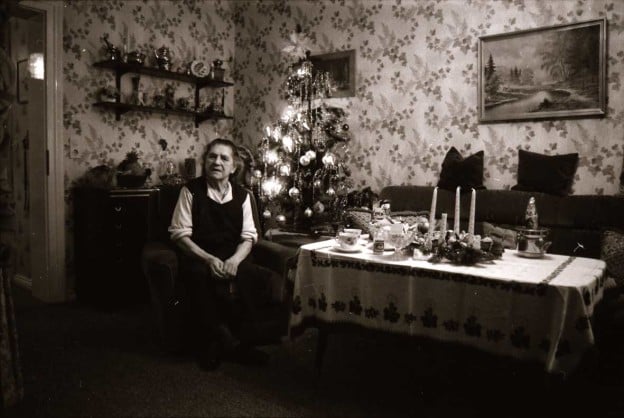 Late 1984, I was booted out of Denmark and hit the next ferry to Puttgarden  (this was a condition of the local cops when they gave my passport back), then hitched my way south through the mist-swathed Northern German Plain towards Hamburg.  Being the old-days, East Germany was nearby and I could hear the eerie sounds of military manoeuvres coming out of the grey murk.

In Hamburg I fell in with an elderly kiwi couple; the husband had spent his childhood in the city and had finally come back for a visit. We wandered around some of the back-streets and in one met this 82 year-old leaning out of her window (unfortunately I no longer have her name) and struck up a conversation. It was in German, with my friends translating. Her husband had been involved in politics, and ran afoul of the Nazis. “Keep out out of politics, mein Schatz”, she told me. When the war came, she was bombed out, and walked to Vienna and back, spending some time working in a Russian soup kitchen.

Going through my negatives I noticed the plaque below her window. It tells us the house was built in 1969 and is dedicated to Johann Hinrich Wichern (1808-1881), for his efforts at helping Hamburg’s sick and poor. Presumably the original site was bombed-out. The extent of the horrific Hamburg fire-storm seems to have been just to the east, but most of the rest of the city was systematically bombed flat.

After a bit of street-side chat, she invited us in for a real treat – to see her living room decorated for a traditional German Christmas – cookies and sweets included!

An 82 year-old shows us her living room, decorated for Christmas in 1984.

The thing that really stands out was the openness. German friends will tell me that in Germany this just doesn’t happen – even next door neighbours may not communicate or have the slightest idea of who they are.  Yet here was a woman living alone in the centre of a city (perhaps already incomprehensible to some cultures) who was happy to initiate an intelligent, friendly conversation with strangers, and invite them in. Wish I could have met her again…