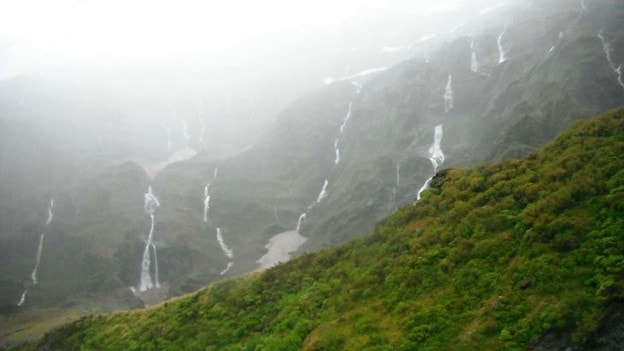 A couple of years ago I re-kitted and headed off from Wanaka for an extended walk in the Matukituki region. There was bad weather on the way, but I hoped I could slip over the mountain pass before then. But I wasnt too concerned, I had a good ten days of food. To cut a longish story short, the bad weather hit on the third afternoon. I was far up in the mountains and found a spot to pitch my tent. It was a long, very wet night, but I figured things would probably be better the next day. It’s the way it often is in New Zealand when wet weather hits. It rains like hell for a while, then suddenly clears up.

Next morning the rain had stopped, so I packed up and set off for the pass. I had only gone up a couple of hundred meters when I saw a black wall of cloud bearing down. I raced back to a spot – the only spot I had noted in passing, where I could slip my tent in. I practically dived in as the storm hit. And there I was for three days and nights, while it poured, snowed, hailed, blew ferociously from every direction, and for several hours on each evening, lightening struck all around. But I had plenty of food, and there was no shortage of water. Every few hours I dashed outside and made sure my tent pegs were firmly held under large boulders.

At the start of the third night in this spot, effectively the fourth evening of the storm, a tent pole on the two week old tent snapped. That’s how fierce the gale was. There are only two poles, so the tent went down and was now just a useless piece of fabric blasting over me, as the hail, snow and lightening continued and my sleeping bag quickly soaked through. That’s a game-changer. At that point you know Death has materialised on a rock nearby and is taking a keen interest on what you are up to.

There was no choice – at first light I had to head down the mountain. I couldn’t get the broken tent pole out of the tent, and the conditions were such, I would have been hypothermic in about twenty minutes. I scooped up the tent and half ran and was half-blown back down the mountain. There was a huge, huge amount of water pouring into the valley (see featured image). The river bed I had walked up was well under a raging torrent, so instead, I had to bash through bush and bluffs for kilometers. It was still raining, but it was out of the storm. At one in the morning of the second night I finally made it to an empty building and slept on the balcony. Next day I forded the river and was soon home.

Scary stuff. A wire bridge over a raging torrent.

What all that was, was a cold front. It’s the interaction of the very cold air that forms around the icy Antarctic, and warmer air that develops further north over the Southern Ocean. The heavy, cold air wedges under the warmer and wetter air, lifting it up and forming clouds and rain. Cold southerly winds are associated. The front that had my, and several unhappy campers names on it, seemed to have taken shape to the south of South Africa a little over a week before. At any point in time there are usually several such fronts orbiting around Antarctica. They come and go, keeping New Zealand wet and our forests green. The cold Antarctic air they bring controls the nature of our life – keeping it temperate.

So – a thought experiment. If the presence of a deep-frozen Antarctica is so important in controlling the nature of New Zealand’s rain – what happened before Antarctica went into deep-freeze? The weather of the past week suggests an answer. New Zealand came under the influence of an enormous subtropical depression – spanning the Tasman Sea. It has brought rain and grey skies. But to a Central Otago native, the weather seems strange – it’s warm rain, humid, languid (the almost ceaseless gales stopped) and coming from the ‘wrong’ directions! The high pressure cells and polar fronts moved far to the south – the weather system that enveloped us is ‘normally’ far to the north.

Satellite image for Jan 31 2015 (from http://www.metservice.com). The huge subtropical depression extending across the Tasman and New Zealand is clearly visible.

One school of paleoclimatic thought suggests that (within limits) past climates might be represented by synoptic situations (the pattern of highs, lows, fronts) that aren’t so common today. In warmer or cooler worlds, millions of years ago, synoptics that might only occur for a few days each year now, may have occurred repeatedly or for longer.

There is some evidence that in much warmer worlds, with less ice at the poles, the high pressure cells (that bring clear weather) would tend to track at higher latitudes. Today they tend to track around 24 degrees north and south – the latitude of most of the worlds deserts. Without the ice to create sharply distinct water and air masses, the polar fronts would tend to disappear. Subtropical depressions would likely extend further south. Under this scenario, New Zealand would get most of its rain from them, rather than polar fronts.

The weather we had for the last week or so was probably rather similar to warm periods in our past. Daily temperatures lately have typically reached around 27 C. This may well have been similar to the Early Miocene summers. Fossil plants suggest mean annual temperatures at that time were at least 17 C (about 7 C warmer than today). If summers were typically about 27 C (ten degrees above the mean), then winters would have often been about 7 C. (ten degrees below the mean) That’s cool, but well above freezing – a critical threshold for plant distribution.

Hypothermia would not have been a concern for any Early Miocene trampers – foot-rot and boots that quickly fell apart were more likely issues. So was there any ‘exciting’ weather back then? I wonder if we copped real cyclones – typhoons, in those days. Food for thought.