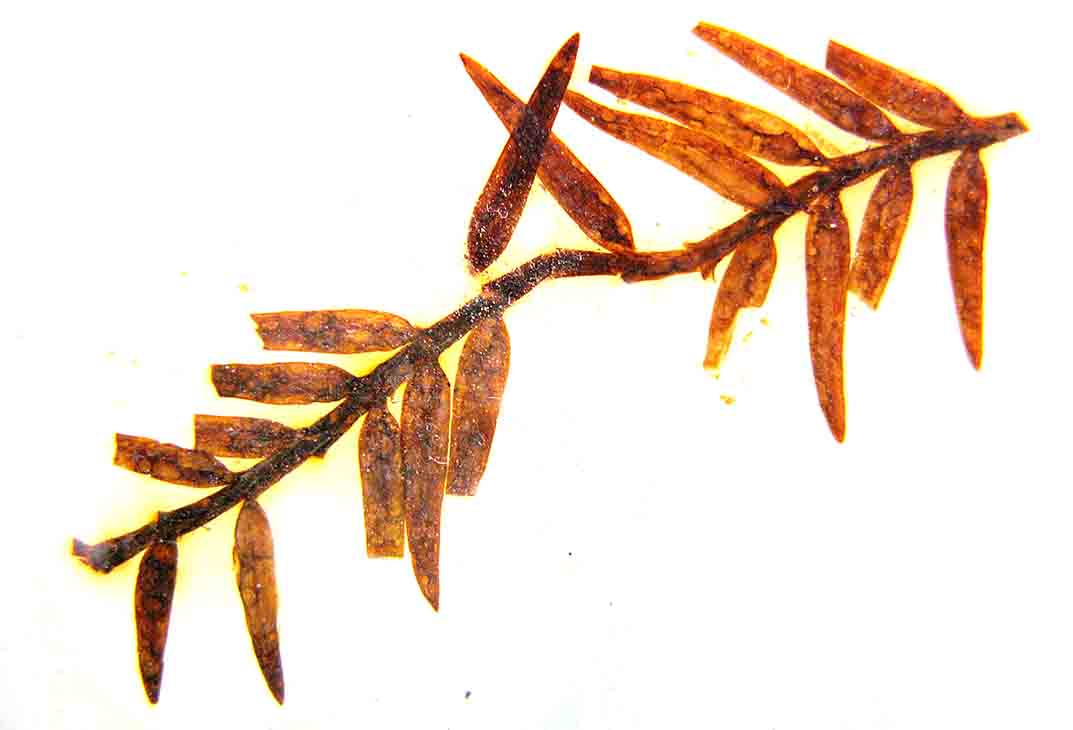 The white sands and muds surrounding Blue and ‘Grey’ Lakes at St Bathans were laid down in a braided river (Manuherikia Group; Douglas 1986). About twenty million years ago, in the Miocene period, It was flowing from the New Zealand hinterland in the west to the east coast. Braided rivers are constantly changing their channels, forming new ones, abandoning old ones. The lenses of grey mud in between the sand probably formed in abandoned channels. Floods washed the mud in, along with a good deal of leaves and wood, which are now preserved as fossils.

However, one part of this Miocene braided river complex is rather different. It seems to have started off as a small floodbasin lake. Over time, trees became established, and what one was open water, became a dense swamp forest. Instead of mud, an almost solid layer of plant fossils accumulated in situ. Today, as this material dries, the mummified leaf fossils separate like layers of paper.

Miocene fossil Retrophyllum shoots from near St Bathans, New Zealand. The shoots are flaking off a block of plant hash which accumulated in a swamp forest marginal to a braided river. These fossil shoots can be floated out of this matrix and mounted between clear plastic.

The most prominent plant in this Miocene fossil hash is a conifer called Retrophyllum . It has remarkable shoots where the leaves are in pairs, and twisted so that leaves on one side of the shoot have their bottom side up (Hill and Pole 1992). This helps to make it an easy plant fossil to identify. With a bit of skill and more luck, intact shoots of the Retophyllum fossils can be floated out of the hash, and mounted between sheets of plastic (see featured image). Retrophyllum is extinct in New Zealand today, but species of this plant still grow in New Caledonia, South America, and various islands in the Pacific.  I visited one specimen in a forest in Fiji.

Detail of a Fijian Retrophyllum showing the opposite leaves on the shoot.

When New Zealanders think of ‘swamp forest’ today, kahikatea (Dacrycarpus) most likely comes to mind. However, at least in St Bathan’s Miocene braided river ecosystem, Retrophyllum, seems to have dominated the swamp forests (Pole, 1992, 1997, 2007). Kahikatea was there too, but the kahikatea-dominated forests that appear in so many of New Zealand’s calendars and posters (see one of Craig Potton’s images in the Otago Daily Times here), may be the result of Retrophylllum’s demise.