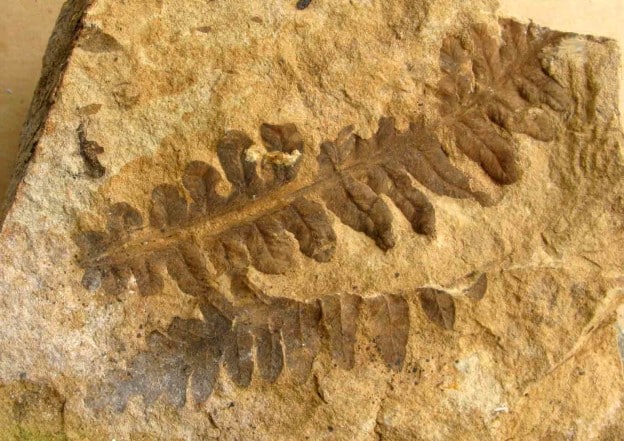 In 1986 the Prof of Geology at Otago University showed me some recently collected plant fossils and asked to me to “confirm they are Jurassic”. The fossils had been collected by Steve Cournane, while he was mapping for his research in Southland farming country. They came from a small pit, just a few metres across, in a farm near Pollock Road, to the west of Glenham. There were reasonable grounds to assume the fossils were Jurassic – they came from the Murihiku Group in New Zealand’s Southland, where Jurassic plant fossils are widespread. However, it was immediately apparent to me that they were not Jurassic – but dated to the earlier Triassic period. How was it possible to be so sure?

The answer is that at the end of the Triassic something pretty intense happened in the world- it was one of the five largest global extinction events ever to hit the planet. Large proportions of a diverse range of life became extinct – from land reptiles, to marine life, to plants. The massive extinction is the reason why a boundary is recognised between the Triassic and Jurassic and New Zealand did not escape.

The plant fossils found by Steve near Pollock Road were dominated by remains of now entirely extinct groups – for instance the corystosperms and peltasperms (see featured image). The same types of plants dominate other plant fossil assemblages from the Triassic of what was Gondwana (for example Australia and Antarctica). Immediately above the Pollock Road plant fossil locality was the ‘Glenham Porphyry’. This is an igneous (once molten) rock with still uncertain origins – it is not clear if it is a shallow intrusion, or flowed across the land surface. In any case, it dates to about the Triassic-Jurassic boundary. Above the ‘Glenham Porphyry’ the plant fossils are very different. After the mass extinctions of the Triassic, the forests returned – but this time they were dominated by conifers and tree-ferns. A New Zealander transported back in time to the Jurassic would probably have felt somehow comfortable in the forests – they would have looked somewhat similar to the forests in New Zealand today. But transported further back, to the Triassic, would likely have produced a severe sense of dislocation – almost nothing would have been familiar.

Fossil seeds and a frond.

The causes of the Triassic-Jurassic extinction are hotly-debated. Most researchers would accept that a later extinction, at the end of the Cretaceous, was initiated by the impact of an extra-terrestrial object. But the case for the same mechanism at the end of the Triassic is far less compelling. It may have been initiated for instance, by a large emission of carbon dioxide.

Until we understand what happened at the end of the Triassic much more clearly, there remains a large and frustrating gap in our knowledge of how Earth works. And for that reason, the plant fossils from Pollock Road,  which grew just before it all happened, are an important part of the puzzle. Aside from a few fragments from marine sediments, they are the only Triassic plant fossils from the Murihiku Group.

Thirty years on, what was the open paddock of the Pollock Road fossil plant locality is now in the middle of a mature pine plantation. A thick layer of pine needles cover almost every vestige of exposed rock. It is highly unlikely that anyone would stumble across the locality now – making Steve’s discovery all the more notable.