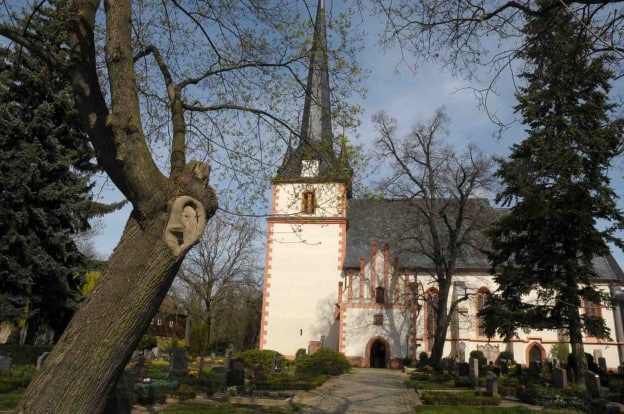 It is a macabre thought that in these days of GIS and databases, someone could probably come up with a map of Europe – colour-coded by the amount of human lives lost in battles over the past score of centuries or so. I wonder what it might tell us.

Leipzig is one of those German cities that was basically off-limits when I first traveled to Europe. It was deep in East Germany. Finally having made it – I wondered what it was I ought to do there. My hotel was isolated in what might be described as a sterile industrial suburb, several kilometers to the north of the centre. A bit of Googling came up with the ‘Battle of Breitenfeld’ – in fact, two battles, fought during the Thirty Years War, about 7 km to the north of the city. That meant it couldn’t be too far. The Thirty Years War is something I know little about, except that it was religious (Protestants vs Catholics), fought in the 17th century, and it was nasty. Something like one-third of the German population died – the First and Second World Wars never came close to that. There was also a sort of incredulity from childhood that a war could go on for thirty years (it’s not so hard to believe now – it’s been 24 years since Iraq was first invaded, and no signs of anything stopping there).

A little more Googling came up with some maps, showing where the various forces were deployed in relation to the local villages. Google Earth showed the villages were still there, I could over-lay the battle-maps, and my GPS could take me to the area. The battles weren’t actually fought in Breitenfeld, but between smaller villages to its north,

I wandered off along a small road, past houses and corner-stores, and eventually found myself in the countryside. It was almost flat, open-fields with crops, and a few patches of trees. Eventually I came to an autobahn over-pass. Some concrete steps took me up to thee level of the autobahn, which was (except for what appeared to be a mine-dump some kilometres away), the highest point in the landscape. Sitting here, I could look out over the field that was the site of the Second Battle of Breitenfeld (1642).

Scene of the Second Battle of Breitenfeld. The village of Podelwitz lies at the end of the road at upper left. I’m sitting on an autobahn embankment, Leipzig is behind me.

It was here, on one day, that about 14,000 soldiers were killed or wounded. It’s likely that in those days, it was pretty much the same outcome. What struck me about the location was the ordinariness of it all. There was nothing spectacular or strategic about the place – it was just a flat open area where two armies could easily line up and proceed to systematically dismember each other. This was the first time that ‘chain-shot’ – two cannon balls linked by a chain and blasted into a formation of soldiers, was used on land. Hardly surprisingly, – one regiment fled the carnage and was subsequently accused of cowardice. When this group made it back to the Czech republic (!) the officers were beheaded and the troops decimated – one in ten were hung. That would have been a long walk for those condemned men. Food along the way would have been free though- any village they passed through would have been ransacked.

Descending from the autobahn I trudged on a few more kilometres to a small road-crossing Here, just before the village of Podelwitz, I turned right and wandered along a virtually deserted country lane. Another autobahn arced around in on the skyline, along with a few signs of the village of Gobschelwitz.

After several hundred metres, beside me was the field where the First Battle of Breitenfeld took place in 1631. According to Wikipedia, more than 13,000 soldiers were killed here in six hours – not including those wounded. Again, another banal location, some quiet villages in the distance, and no memorial (there is one several kilometres away) – a nameless field. Somewhere here will be a big hole where the remains of the equally nameless cannon—fodder would have been dumped.

Scene of the First Battle of Breitenfeld. It was fought on this field, between the two villages on the sky-line.

So here was a second battle – probably overlapping (if there was a GIS map, it would be red spot… ) with the other –  27,000 casualties at least. Why the hell Breitenfeld? It says something about the German culture, or perhaps more about my own – that there aren’t memorials to these battles everywhere. As far as I could tell, there was absolutely no sign commemorating this battle, or its victims. As I tried to take it all in as a solitary cyclist, a young man, slowly came towards me along the lane. A local villager no doubt, he and I were the only people in sight. He ignored me and continued on his way. I headed back along the lane, this time detouring to check out the village of Podelwitz (pop <500), it has a church that pre-dates the battles (see featured image). I passed a few people but finally I remembered the atmosphere from an earlier trip to this part of Germany. It’s one of those places where, even if by some chance, you ever make eye contact with someone, no-one ever, ever responds to your greeting. I even came across a man taking his cat for a walk on a leash. A ‘Guten tag!’ from me drew stares of outright malevolence from both man and cat.

Perhaps thirty years of butchery and a couple of world wars will do that.