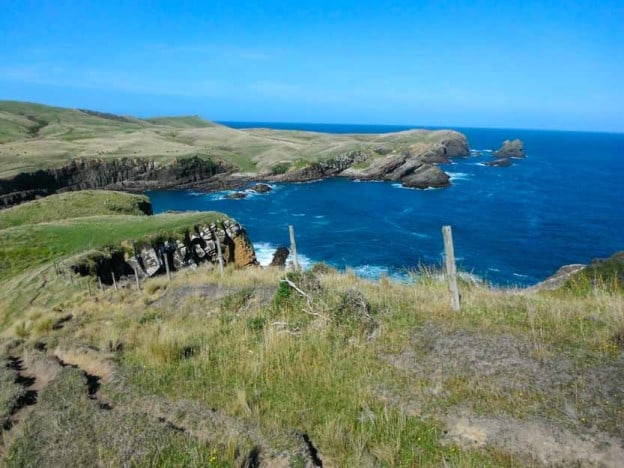 A few years ago I used to teach American classes that came to the University of Queensland. One evening my Stanford class had just arrived and I wandered over to their college accommodation to say Hello. I came across an odd sight – a knot of students surrounding what turned out to be a young woman who was so green, I thought she was photosynthesising. She was one of their number – and had been bet $US100 she couldn’t eat a bubble-pack of Vegemite (one of those little packs you get at hotel breakfasts that the average Aussie kid would smear five of on to a slice of toast).

Vegemite used to feature in the odd lecture I would give on New Zealand geology. As an analogy I would say to think of slice of toast – this is New Zealand’s Gondwana-core, firmly attached to Australia, Antarctica and the rest of Gondwana. On this, smear some Peanut Butter, Vegemite (cue a chorus of UUGGH!!! from Americans here), some slices of beetroot, and so-on. These are the ‘terranes’ that flank the core. They are slices of rock with different histories that have come from ‘somewhere else’.

One such terrane is the Murihiku – it includes a slice of sediments through Southland, including the Catlins area (see the Featured Image) and the Jurassic fossil forests at Curio Bay, and, after being separated by the Alpine Fault, reappears in the western North Island. There are many plant fossils in Murihiku – so the question is, where were they when they were growing?

Paleolatitude can be determined from a rock’s remnant magnetic field – something that can get ‘baked in’ when it is formed. Because of this, we know the latitude of any point on Gondwana fairly accurately and it turns out that the Gondwana-core of New Zealand was around 70-75 ° in the Jurassic. That’s polar – but where was the Murihiku and its plants? Unfortunately there is a problem with using the paleomagnetic method in New Zealand – there was a strong ‘overprint’ in the Cretaceous, making results from older rocks suspect. A more modern technique involves precisely dating mineral grains such as zircons and mica .  A river catchment, supplying sediment to a basin (like the Murihiku) will have a particular ‘fingerprint’ of detrital mineral ages. The combination of dates in a sediment can be used to narrow-down its source.

This technique has been used to suggest that the Torlesse Terrane – lying ‘outboard’ of the Murihiku, and forming much of Canterbury and the Southern Alps, formed off the New England Fold-Belt of northeastern Australia (Adams et al. 1998). This would have been in latitudes of about 60-65° – high, but not polar. As far as I know, no-one has used this technique for the Murihiku yet. But there is a suspicion that terranes were moving counter-clockwise around the Pacific in the New Zealand sector. In that case, the Murihiku may also have accumulated somewhere off Australia.

Another possibility to work out paleolatitude is to use the plant fossils. The Jurassic vegetation and paleolatitude of the Northern Hemisphere is particularly well-known. Someone who has given this a great deal of thought is Andrew Rees – an American paleobotanist. He found that different plant genera tended to have a particular latitudinal range over which they were restricted, or at least more prominent – a ‘centroid’.  Rees and co-authors Ziegler and Valdes, used multivariate statistics on a huge database of fossil distribution to work out the basic relative latitudinal order of these centroids – a ‘floral gradient’, for several key Jurassic plant genera. They found that Ginkgo, and some related genera along with broad-leaved conifers, were typical of high-latitude and polar regions. Scale-leaved conifers and some cycad-like plants were more typical for equatorial latitudes. The really novel idea in their work was that each genus along the gradient could be assigned a ‘score’. The average score for all genera in a fossil assemblage correlated with the latitude. This provided a method to work out paleolatitude in places where  it was unclear, such as the Murihiku. I gave this method a go for the Murihiku Group (Pole 2009) and came up with a broad mid-latitude result (c. 40-70°), consistent with a slightly more equatorial location than New Zealand’s Gondwana-core (an error in the paper said the addition of Hausmannia would raise the average score slightly, meaning a move away from the pole – it should read toward it).

This result can be compared with those based on marine faunas. Stevens (1971) noted that in the Northern Hemisphere Jurassic, a high-latitude ‘Boreal’ realm could be distinguished. The absence of an ‘anti-Boreal’ realm in New Zealand, suggested it lay away from the pole. However, a more recent work Damborenea 1993) has argued that a high-latitude (>60°) Boreal counterpart – the Austral Realm, can be identified, and the Murihiku was located within it.

Combined with the plant data, these latter faunal results suggest that the Jurassic Murihiku accumulated near the Polar Circle (66°), but whether above or below it is so-far, unclear.

Oh, the young woman from Stanford finished the Vegemite, without barfing, and at least some of the dosh was paid-out.

Stevens, G. R. (1971). Relationship of isotopic temperatures and faunal realms to Jurassic-Cretaceous Paleogeography, particularly of the south-west Pacific. Journal of the Royal Society of New Zealand 1: 145-158.