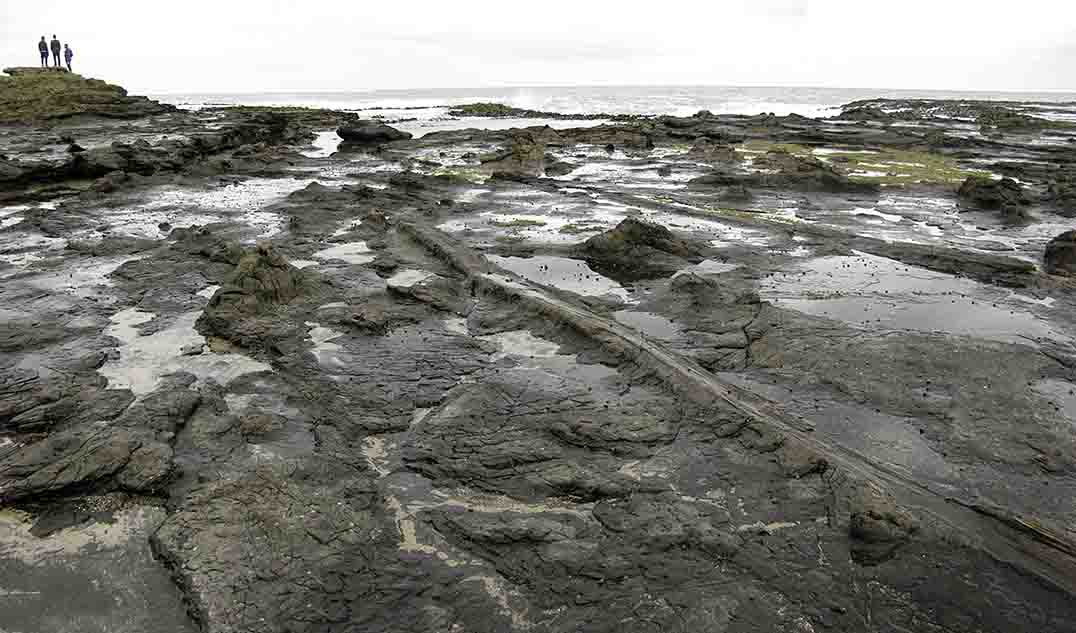 At Curio Bay near the southernmost point of New Zealand’’s South Island, you can walk around the remains of a Jurassic fossil forest. Tree stumps are still in their growth position, and fossilised logs criss-cross through the sandstone overlying them. So can we add these pieces of information together – and see what the Curio Bay fossil forest looked like when it was alive? In fact, was it actually a forest?

The view over the Jurassic Curio Bay fossil forest from the viewing platform. Fossil logs can be seen criss-crossing the tidal platform among hundreds of fossil stumps.

In 1982 I wrote a report on the Curio Bay fossil forest as part of my study at Otago University. Something I was keen to do was to produce a forest profile – a cross section of the vegetation as it would have looked when it was growing. At that time, I used a fairly simple approach. I measured the locations of stumps along a transect, then, simply sketch in trunks based on the lengths of appropriately sized fossil logs, then sketch in a canopy.

An early attempt at a reconstructed profile of the Jurassic Curio Bay fossil forest. This is from my 1982 report on the forest, and simply rotates known fossil logs to the vertical, and ‘attaches’ them to mapped tree stumps.

However, in that same year, a paper was published by paleobotanist Tim Jefferson, documenting a series of Cretaceous fossil forests in Antarctica. The general style of sedimentation, Jefferson’s (1982) similar goal to bring a fossil forest alive, meant that as I continued work on Curio Bay, his paper had a strong influence on me.

The focus of Jefferson’s paper was on the information the fossil tree rings can give. The important issue was trying to understand how forests grew in a polar environments. Almost as an afterthought, Jefferson provided a 3D reconstruction of a portion of his Cretaceous Antarctic forest. It showed rather widely-separated trees, more like a woodland than a forest. Oddly, the trees he drew were very short – only 4-5 m tall. The only details Jefferson gave was to say that the tree heights were “estimated from trunk breadth: height ratios in LaMarche et al. (1979)”.

While the rest of Jeffersons paper was stimulating, his reconstructed forest image bothered me. For one thing, Jefferson had illustrated a vertical fossil tree trunk about 5 m high. Surely the forest would be much higher than a preserved trunk?

In the mid 1990s I was putting my work on the Curio Bay fossil forest together for a proper paper. I wrote to LaMarche and obtained a copy of their paper, which deals with tree ring chronologies of living trees. As a tree-ring study, this covers the old trees and often from stressed environments. The reason for Jefferson’s oddly short trees became clear – he had reconstructed them based on the dimensions of aged or relatively stunted modern trees. But Jefferson’s work had hinted at a much more rigorous approach – a mathematical relationship between the diameter of a tree trunk, and the height of the tree.

In 1994 a timely paper on another fossil forest came out – this time for one in the Miocene of Germany. Mosbrugger et al. (1994) used quite a different calculation to predict the tree height, and when I applied it to Jefferson’s Antarctic tree stumps, it effectively doubled his height predictions. This looked much more realistic. However, even Mossbrugger et al.’s equation was apparently based on ‘champion trees’. As trees age, they trunks grow wider, but upward growth tends to level off. So this equation might still be underestimating height.

Fossil logs and tree stumps at the Jurassic Curio Bay fossil forest – looking back towards the viewing platform.

At this point I decided to get some of my own measurements, and therefore spent some time in the rainforest of Queensland’s Bunya Mountains. This was courtesy of Don Butler, a botanist who was studying the area for his PhD. The Bunyas are one of the few areas where two species of Araucaria grow together. The Bunya Araucarias appear to be regenerating continuously below the forest canopy. There meant there was a wide rang of tree sizes, from saplings up to ‘champions’. This, plus the fact that Araucarias, or something close to them, formed some of the trees in the Curio Bay fossil forest, meant I figured this was a perfect place to get a range of data. Armed with a tape measure and an inclinometer, I measured as many of the two species as I could.

The key observation was that young trees, many of them the size of trunks in the Curio Bay forest, were tall and skinny. Growing up within the forest, they were forced to strive for light, but because they were sheltered from wind by surrounding trees, they could get away with being so skinny.

When I plotted up the data from the Bunya Mountains, they gave a curve about twice as high as Mosbrugger et al’s curve. But then I found measurements by other botanists – for living Araucarias from New Guinea (Paijmans, 1970; Gray 1975), and these produced an even higher curve. So, the Bunya tree diameter-height curve was not exceptional.

A comparison of three different ‘curves’ of tree trunk diameter versus tree height. The Mosbrugger et al. (1994), Bunya Mountains (the ‘low’ curve in Pole 1999) and New Guinea curve (from data in Pajmans 1070 and Gray 1975).

Based on the Bunya curve as a minimum, the Jurassic Curio Bay vegetation was clearly a forest, albeit with a reasonably low c. 10 m canopy, with some c.30 m emergent trees poking through it (Pole 1999). The minimum predicted tree heights are consistent with the dimensions of some of the fossil logs scattered over the forest. The log lengths are a little less than the Bunya curve, but represent trees that would have been taller. However, there are logs with dimensions above the Bunya curve – indicating that the New Guinea curve might be more appropriate, and emergent trees may have reached around 35 m high.

I never got to meet Tim Jefferson – he was killed in an avalanche in Peru on Sept 12, 1983 (Jefferson and Taylor 1983). I arrived in the UK just over a year later, and spent the winter of 1984-85 in Cambridge. While I was there I took the opportunity to read through his thesis at the British Antarctic Survey. Jefferson was clearly a smart researcher and admired by his colleagues. He has since had a genus of fossil wood named after him, Jeffersonioxylon (del Fueyo, et al. 1995) and there is even a Timothy Jefferson Field Research Fund.

A reconstructed profile of the Jurassic Curio Bay fossil forest, adapted from Pole (1999) and based on the Bunya Mountains tree trunk diameter versus height curve. Using the New Guinea tree curve would ‘stretch’ the profile upwards such that the tallest trees were around 35 m.

But there is an epilogue to this. Just after my paper was published, I became aware of another work – specifically on ‘Predicting the Height of Fossil Plant Remains’ by Karl Niklas. For whatever reason, this paper (Niklas 1994) hadn’t reached either my radar when I submitted my manuscript. (Mosbrugger and Niklas would have submitted their papers at about the same time). Niklas, who specialises in plant structure, had, after extensive work, already come up with a tree diameter -height equation that pretty much exactly describes the Bunya curve.

So a hat-tilt to Karl Niklas.

References (clickable links will take you to a pdf)

Niklas K,J. 1994. Predicting the height of fossil plant remains: an allometric approach to an old problem. American Journal of Botany 81: 1235–1242