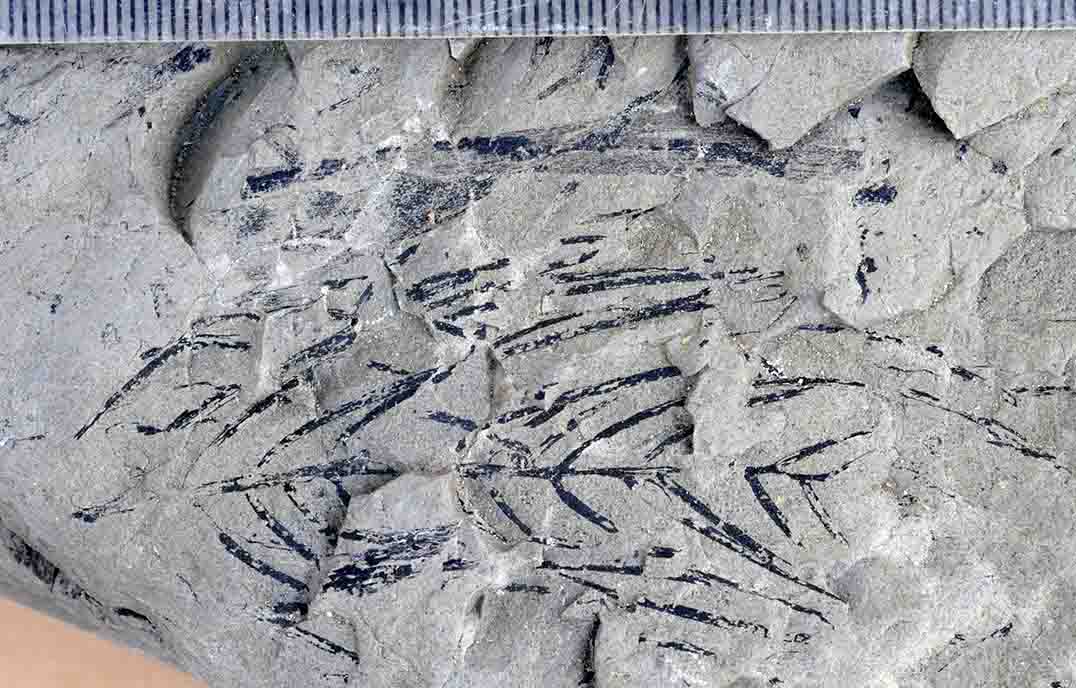 As you pull up in the car park above the fossil forest at Curio Bay (Pole 1999, 2001, 2004, 2009), there is a wonderful patch of living, native forest, just behind. Its conifers, like all New Zealand conifers today, are evergreen. But what of Curio Bay’s forest, back in the Jurassic?

The most common type of conifer fossil at Curio bay, Elatocladus, had feather-like shoots, with leaves up to about 10 mm long, rather like the living matai. It shed shoots that are branched, and show broadly rhythmic growth, with long and short leaves, representing growth over favourable to unfavourable seasons. These trees held onto their shoots for several years, and were therefore unquestionably evergreen.

The most common conifer fossil from Curio Bay is Elatocladus -the ‘feather’-type of shoot at the bottom right. To the left is the much longer-leaved Bellarinea. Note that the Elatocladus shoot is branched, whereas (hard to tell in this specimen) the Belllarinea is probably not. This specimen from the coast north of Curio Bay.

But rarely, another kind of conifer fossil has been found at Curio Bay and in some of the bays to the north (see featured image). It has much longer leaves, sometimes with a distinct inward-curve to them. In my opinion, these shoots are the same as a fossil described from Australia as Bellarinea richardsii (McLoughlin et al. 2002; Nagalingum, et al. 2005). The Australian fossils are younger – Cretaceous, but some of the specimens show the same remarkable shoot habit. These authors, on the basis that the shoots were never branched, the leaves being generally the same length along the shoot, and no sign of buds – concluded that the “shoots were seasonally shed units”. That is, that they were deciduous conifers, like, for example, modern Taxodium.

Being evergreen or deciduous are both strategies for plant growth. It ‘costs’ a plant to grow leaves and maintain them. In some situations, like New Zealand’s mid winters, it makes more sense for a plant to keep its leaves from one season to the next. But there are some situations, harsh winters for example, where it might be more cost-effective for a plant to drop its leaves, and grow new ones next season. But where both evergreen and deciduous co-exist (or appear to) some sort of different ecological niche is almost certainly implied. If deciduous Bellarinea tried to compete directly with the dominant, evergreen Elatocladus, it most likely would have been edged-out. More likely it grew in certain situations. As a deciduous plant, Bellarinea probably grew faster than Elatocladus. Perhaps it sprang up in patches, quickly after a fire. Then, over time, the Elatocladus took over, while Bellarinea popped up in another fire patch. Fire was certainly part of the broader Curio Bay region in the Jurassic. Similar fire dynamics work in the northern Boreal forest, for example between the deciduous and fire-promoted larches (Larix), and the evergreen spruce (Picea) and firs (Abies), which establish only after there has not been fire for a long time (Schulze et al. 2012).

So, when you head back to the car park, before you drive off, pop across the road and walk around the forest footpath. Wonder at the fact that at Curio Bay we have a living forest so close to a Jurassic fossil forest. Realise that some of these trees (like the rimus) are distantly related to the Elatocladus that were living here in the Jurassic. But while you walk, imagine too, that if this was the living Curio Bay fossil forest, and it was autumn. Instead of the sombre evergreen today, there would have been plenty of bright yellow. The Bellarinea, and probably a few other Curio plants, have ‘turned’ and are dropping their foliage. And that crackle getting louder in the distance – a forest fire approaching…

References (link will take you to a pdf)