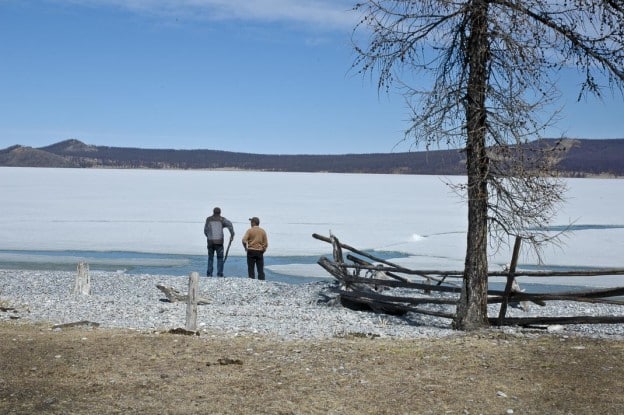 It was on the flight back to UIaan Baatar that I remembered the ghost.

My field partner, Nyambayar, and I had been working in an area near the Mongolian town of Moron (pronounced ‘muh-roon’). Moron lies in the far north of Mongolia and is the gateway to Lake Khovsgul.  This is the largest body of water in Mongolia, and is part of the same system as Lake Baikal in Siberia.  Being so close (c. 100 km) to Lake Khovsgol, it seemed a shame not to pop up for a quick look.

Yours truly by Lake Khovsgol.

Mongolia’s only large boats, on a still mostly frozen Lake Khovsgol in late May.

The lake is totally frozen in winter.  In fact, it was late May when we were there, and it was still mostly ice. Khovsgol is surrounded by forest, and not too far past the end of the lake is the border of Russian Siberia. We had lunch at a tourist camp, but there were no other visitors. There was a friendly woman who ran it, and several equally friendly cats.

Friendly cats at the camp by Lake Khovsgol.

Back in Moron, we checked into the usual basic hotel for the night. Our shared room was upstairs, with a couple of single beds.  At some point it was lights-out and time for sleep. It must have been within twenty minutes or so. I was lying on my back, in the otherwise now dark room. Suddenly – a man was standing beside my bed (in between my bed and Nyambayar’s) and, as I turned to face him, looking me straight in the eyes. He was wearing what I would say were 1950s style clothes – a sort of grey suit and a short -brimmed hat (a fedora perhaps). The style is still worn by men of the older generation there.  The other impression that flashed through my mind, was, weirdly, that he was not a Mongol. Central Asian, yes, but not a Mongol. I’m not good enough to tell the faces, but perhaps he was Buriat, or Kazakh.

Those two impressions were made in the half-second before I sat bolt-upright to confront him. People appearing in your room in small-towns of Mongolia is something to take seriously (I’ve only once barricaded a hotel room door, but that was responding to one heck of a row going on outside). And he vanished. In the murk I could see my partner – no signs from him. At least I hadn’t yelled. Satisfied it was an apparition, I settled back down to what passed for sleep on a mattress like a brick with a sheet wrapped around it.

Flying from Moron back to Ulaan Baatar.

Next day we headed for the airport, and boarded a half-empty twin-prop SAAB for the haul back to Ulaan Baatar. After a while, to break the monotony, I said to Nyambayar “Hey, I saw a ghost in our room last night!”.  Something of a cloud passed over his face. Nyambayar, who is a straight-forward kind of guy, replied that, while trying to ignore it under the sheets, he had heard someone walking around the room and breathing. He was well-aware that there was something uncanny in our room that night.

I’ve had quite a few strange encounters now (the one that really takes the cake was in China) – but this was the only time there was some kind of ‘back-up’. Some kind of ‘shared-experience’.

Who was that guy?