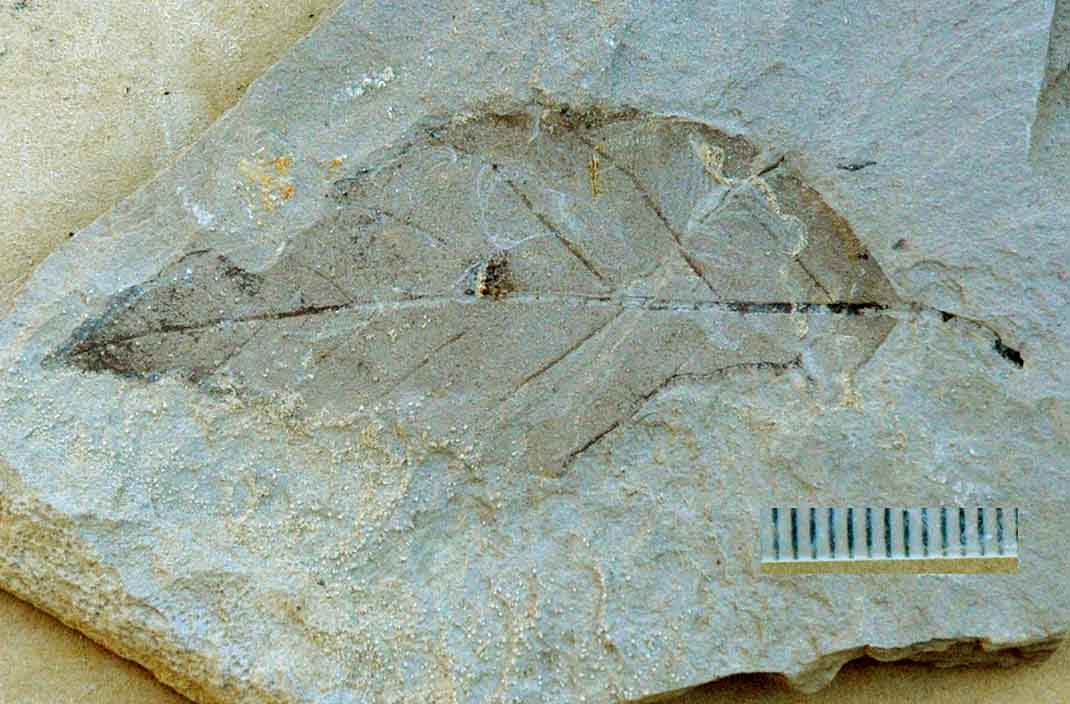 Perhaps the most surprising thing about Nothofagus leaf fossils in New Zealand is – not finding them. Nothofagus is another name for the southern beech trees that form forests in New Zealand, as well as Australia, Patagonia, New Caledonia and New Guinea.

As a group, the beeches are certainly an old element in New Zealand, with at least some of them being around since Gondwana-times. This is not the same thing as saying that the Nothofagus in New Zealand today have an unbroken lineage back to Gondwana, but they are something you might  expect  to find as fossils.

When I collected plant fossils for my PhD on the Miocene Manuherikia Group, I noticed an striking pattern in the Nothofagus remains. Fossil beech leaves were common in some beds – but only the lower, older ones. This was the same whether it was the lower beds in the Bannockburn area, several hundred meters away on the banks of the Kawarau River near the Bannockburn bridge, or several kilometers down the Kawarau River, near Cromwell. Even tens of kilometers away, in St Bathans, where the sediments are the oldest of the Manuherikia Group, fossil Nothofagus leaves were common.

In each of these localities, Nothofagus was the most common leaf fossil, up to perhaps 40 % or so of the total. It’s safe to say that in the forests provided these leaves, the beeches would have made up about the same amount of the biomass. Higher beds of rock had leaf fossils – they include some diverse and large-leaved ones. The supplejack vine (Ripogonum) was there, palms, and even Eucalyptus, but no Nothofagus (there was a single exception where I found a Nothofagus leaf with a Eucalyptus). What was going on?

The distribution of beech forests now gives a big clue. In New Zealand today, the beeches can form forests from sea level to the tree-line in the South Island. In the North Island, they tend to make forests only at higher altitude. In other countries, the trend is similar. The attitudinal zone of Nothofagus forests rises from Tasmania in the south, until it skims the mountain-tops in the Border-Ranges of northern NSW and southern Queensland. There is then a gap,  before they appear again, high in the mountains of New Guinea. From Tierra del Fuego at the southern tip of South America, the story is the same. The further north – the higher the zone of Nothofagus.

The Nothofagus Zone (green) between Tasmanian and New Guinea (pretty sure I adapted this figure from someone else’s a long time back. I’ll add the credit when I find it)

It should be clear from this distribution that Nothofagus forests prefer cooler conditions. You won’t find beeches in the lowland tropical forests like in the Daintree. But it’s not simply temperature – cooler can also mean wetter. For instance in the Border Ranges, the cloudiest conditions are on the tops. Perhaps heavier rain falls occur in the lowlands, but the frequent clouds on the ridge tops means they hardly ever get very dry.

I think this is what the Manuherikia Group Nothofagus leaf fossils are telling us. In the lower, older beds, the earlier Miocene climate was optimal for beeches to dominate the forests. It was relatively cool and wet. Then, later in the Miocene, there was a climate change. It got warmer, and the rain would have evaporated more quickly, and perhaps it fell more seasonally. This tipped the balance from temperate conditions to more subtropical. Nothofagus never left – there are always their pollen grains around. Perhaps it just became rare, or even the crests of the low hills of the time were enough of a refuge.

Scientists love to say “Absence of evidence is not evidence of absence”. But in this case, its not simply lack of evidence. There are nice beds with  fossil leaves, higher in the Manuherikia Group., It’s just that they don’t have Nothofagus. Sometimes not finding something is important.

Technical Stuff.
The Manuherikia Group refers to the fluvial-lacustrine muds, sands and coal that accumulated on top of the schist in Central Otago (and probably further afield too), New Zealand, in the Miocene, and before substantial mountain-growth. See Douglas (1986) below for detailed description.

Links will take you to a downloadable pdf.

Mildenhall, D.C., 1989. Summary of the age and paleoecology of the Miocene Manuherikia Group, Central Otago, New Zealand. Journal of the Royal Society of New Zealand 19, 19-29.