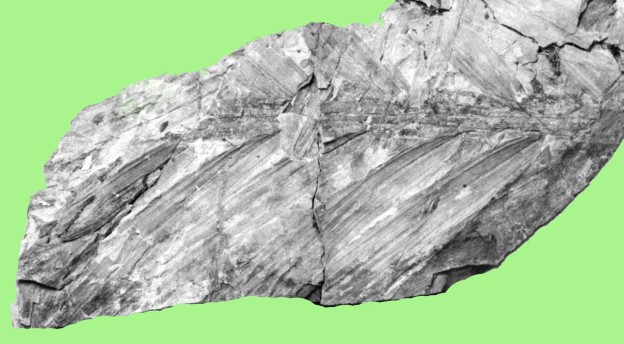 One of the endearing memories I have during my PhD was working on the banks above the Kawarau River near Cromwell (Central Otago, New Zealand), in the middle of the winter. I was belting my way with a pick into a sequence of mud that was frozen solid. This was probably a good thing, as it would have been a quagmire otherwise. But what I was digging out were fossil palms – criss-crossing palm fronds, layers of seeds, and even some flower-heads (Pole 1993, and see the featured image above). The area was clearly a palm-dominated swamp at the time (around 17 million years ago, Miocene period, Manuherikia Group). Mud and lignite at the Kawarau River is full of palm pollen and probably correlates with similar layers tens of kilometres away at places like Clyde,  St Bathans, and even Te Anau and the Waitaki River. Clearly these palm swamps may have been huge. The palm fossils I was digging out were not a new discovery – one of the earliest students of New Zealand plant fossils, Baron von Ettingshausen, published a fragment of fossil palm frond in 1887. It probably came from the Kawarau River locality.

The original Ettingshausen palm fossil, now in the Otago Museum.

Central Otago has the most extreme, ‘continental’ climate of the otherwise mainly maritime New Zealand. The summers are blistering hot and dry (In Alexandra the mean is about 10.8 C, the maximum recorded is 37.2 C) but the winters can be brutal. They aren’t quite on the scale of Mongolia or Canada, though once in a while we make a respectable effort. I remember waiting for the school bus in ground frosts down to -13C or so, but the official Alexandra minimum is -11.7 C. Not far away is the village of Ophir with New Zealand’s officially coldest temperature of -21.6 C. But mainly the winters are more just … miserable. During high school and early university I pruned fruit trees in early mornings when every step of tender frozen feet on rock-hard ground was an agony. But when the sun came up – so would the mist. The temperature would rise to about zero, but the ice in the trees, and the ground, would melt, freeze again, and melt, throughout the day. Boots would get wet and near frozen water would dribble up my sleeves. The mist could last for days, or even weeks. Central Otago is emphatically not palm climate. So what goes with the palm fossils?

Clearly things were a bit warmer, but what does that really mean? Was the average mean annual temperature higher? Or was it just that there weren’t cold winters? New Zealand does have the most southerly natural palms in the world – the limit is near Christchurch, not that far from the fossils, so on palms alone the mean temperature of Central Otago need not have been that different from the coast of the central South Island now. The winters were certainly not as cold as they are now – the natural distribution of palms is limited very clearly by the temperature of the coldest month reaching freezing. However, there were almost certainly more than one species of palm in Central Otago, perhaps two or three. This suggests that warmth was well above the limit for palms.

The broader questions that are raised by palm fossils in unexpected places are not trivial. On a larger scale than New Zealand, the presence of palm fossils in the continental parts of North America has been highlighted (Wing and Greenwood 1993). The palms require that conditions had to much more ‘equable’ than they are today. The ‘problem’ was that climate models of the time could not recreate these conditions (Sloan and Barron 1990). Climate models are a distillation of what we know about the physical processes that operate on Earth. When instances are found where the models ‘fail’, climate modellers have their work cut-out to isolate what it is they are missing. Carbon dioxide levels seem to be part, but not all of, the solution (Huber & Caballero, 2011). It’s an excellent example of progress in science, and of course – the relevance of studying plant fossils to the bigger picture.

But temperature is not everything. I find it interesting is that extensive palm swamps today tend to be correlated with distinct seasonality of rainfall – that is, there is a wet and dry season. The “dry” may not mean “drought”, but it might be the difference between water in the swamp being at the surface for part of the year, and being flooded the rest (Pole 2003, 2014). So palms may be giving us an important clue to atmospheric dynamics.

As well as this –the mud around the palm fossils has abundant fine charcoal, implying fire. Palms and fire may strike a kiwi as a bit odd. It wasn’t til I travelled in monsoonal northern Australia and saw a lot of palms in frequently burnt country that it sank in that palms are very fire resistant (and very flammable – recently my guides in the Indonesian forest would delight in putting a match to a palm tree when I wasn’t looking). So Central Otago may have been closer to the highly seasonal, often-burning, ‘fire-forests” of some parts of Australia than more typical rainforests.

Alas, you can no-longer visit the Kawarau River palm-fossil locality in mid-winter and pretend you are in a subtropical paradise. It sits below the waters of hydro-Lake Dunstan.