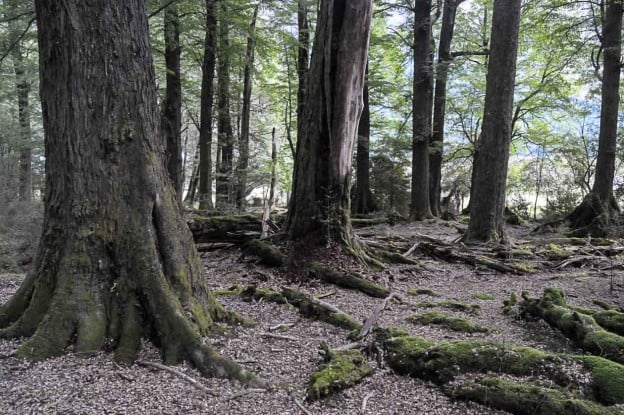 In the old days in New Zealand, you needed to add the right prefix to telephone numbers to ring the adjacent villages. Our number was a 3-digit figure in the Clyde exchange. To ring Alexandra, 6 km down the road, I think we had to prefix their 4-digit numbers with a 1. To get us, they added a 2. To ring Omakau, about 15 km away, we had to prefix their number with a 3. Anything further than about that – you had to call an operator and get manually connected. I still remember my Mum muttering after the reaction she got when she rang the operator and asked to be  “connected with Paradise.” Apart from New Zealand in general, yes, there is a place called “Paradise”. It’s a large farming property beyond Glenorchy at the head of Lake Wakatipu. If offered (and still does) cabin accommodation in forested surrounds. Our family went there for a few days holiday.

Beech (Nothofagus) forest beside the road to Paradise. The openness here will be partly due to grazing.

I took some of my earliest photographs there – trying to catch the yellow-breasted robins on a box-Brownie camera that took 120 roll film. The forest at Paradise is prime habitat for them – it’s beech (Nothofagus) forest.  At about 10 years of age, my experience at Paradise was formative in what I thought a beech forest should look like. At least in the lower, flatter areas, it’s as close to some of those ‘mystical’ forests you see in fantasy images, as you can get (The ubiquitous ‘Lord of the Rings’ filmed Lothlorien near here). Virtually all of the canopy trees are beeches – and they can be very large – the big ones are probably 300-400 years old, and under the canopy its relatively open, you can walk around pretty freely. It’s a natural, promordial forest. And yet….

Spot the yellow-breasted robin! Shot with a box-Brownie camera in about 1970.

It’s self-evident that much of New Zealand could not have had forests, or any vegetation at all, at the height of the last ice age. That’s because the place was under hundreds of meters of glacier. This applies to Paradise which was underneath the glacier that formed Lake Wakatipu. It was only after the ice melted, around 11,000 years ago, and fresh rock was exposed, that plants could establish. The first plants would have been those grasses and shrubs that could deal with bare rocks – and the still harsh climate with a glacier not far away. Only after these smaller plants had gained a bridgehead could the forest come. The Paradise beech forest looks primordial- but its actually a new-comer.

The road through Paradise. Beech forest covers the glaciated mountains in the distance.

The evidence of fossil pollen has shown that Nothofagus-beeches ‘invaded’ many of the valleys of the South Island relatively lately. In the Paradise region, this happened around 2000-1500 years ago (McGlone et al. 2003). So that’s an awfully-long time that the place had some sort of forest, but didn’t have beeches at all. The trigger was probably some sort of climate change. What unsettles me the most about this is that it wasn’t simply an ‘invasion’, as in beeches sort of filtering in and finding their niche, but a kind of genocide. When the beeches came, they took over. The pollen evidence suggests that much of what Nothofagus blitzed was a conifer forest, probably a fairly low one of celery pine (Phyllocladus) and bog pine (Halocarpus). You can still see patches of celery pine in what are probably fairly frosty open-patches in the beech forest. Totara is scattered through the forest today and may have been more prevalent before the beeches. But on the better soils of the valleys, I wonder if taller conifers, like matai and kahikatea were also common. If they were, then ‘genocide’ seems an even more appropriate term, as these species have been virtually extinguished from the area.

A frosty opening in the beech forest with smaller, yellowish celery pines (Phyllocladus). The taller, darker beech (Nothofagus) are in the background.

The implications are rather profound – far more than beeches simply ‘invading’. There was certainly a structural change in the vegetation – that a lower, more heterogeneous canopy of celery and bog pine was replaced by a higher and more even canopy of beeches seems certain. But if there were taller confers, then perhaps the plants that usually go with them, like tree ferns and supplejack vines, were also there. While a change from a low conifer forest to a tall beech forest could be seen as something of a ‘progression’, the change from a diverse, complex (some would say ‘tropical’) rainforest to an almost monospecific beech forest (that some would say was not a rainforest) seems more like a step backwards – a regression.

I wonder what kind of bird I would have tried to photograph if the beeches hadn’t invaded? Yellow-breasted robins are not restricted to beech forests (as far as I know), but they are said to prefer “structurally simple forests with dense, even canopies, and ground covered with leaf litter” (Borkin et al. 2008). That about sums up beech forests, chances are, the robins were not at Paradise before the beeches.