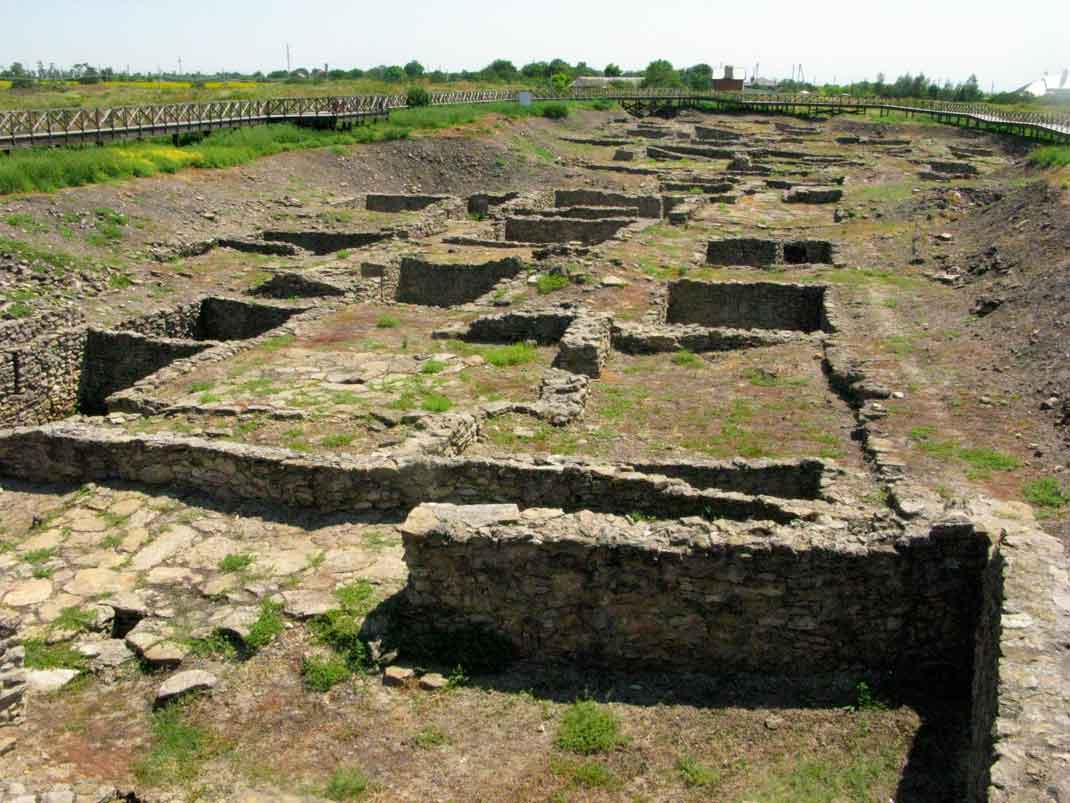 The River Don is one of Europe’s big ones. Even if you haven’t heard of it, the sound should be somewhat familiar – there’s Danube, Dnieper, and the Dniester. They all contain the ancient word ‘don’ word, which simply means …. ‘river’. The Don hits the coast in the Sea of Azov, which is weirdly like a miniature version of the Black Sea. The smaller Azov connects with the Black Sea via the narrow Strait of Kerch – the Cimmerian Bosporus of antiquity, while the large Black Sea connects with the even larger Mediterranean via the Bosphoros and then the Dardanelles.

It’s the spot where the Ancient Greeks established the town of Tanais. They built Tanais in what was nomadic Scythian territory – so it’s no wonder it grew as a heavily fortified town with stone walls and a moat. Some of the Scythians were probably none too happy with Greeks on their turf, and there would have been much behind those walls that was tempting. In fact, the Don was regarded as the border between Europe and Asia, and was therefore right on the frontier. It was built in the 3rd century BC, was sacked at least once – in the last few years BC by another Greek, Polemon, and was finally destroyed by Goths and Scythians by the 3rd century AD.

The ruins of Tanais, South Russia.

We were driving east along the road just to the north of the Sea of Azov. Some days earlier, our guide and driver, Olga Tikidzhan (contact details below), had spontaneously suggested we visit her home city of Taganrog. Now we we on our way from there to Rostov on Don. Along the way, she thought we might like to visit Tanais, which is just 2 km off the road. Today Tanais is a museum. You can walk around the edge of the exposed ruins of the city itself. You c an see what remains of the walls, the moat, and the basements of the houses that were inside.  There are also indoor exhibitions. One of them displays artifacts found on site and documents the development of Tanais.

The remains of the moat around the ancient city of Tanais, South Russia.

Then there is a superb museum of ancient textiles and costumes. A thousand years after Tanais was ruined, the region was still the territory of nomads. But this time it was the Golden Horde. These were Turkic people – descendants of the Mongols from a couple of centuries before. They buried their nobles in mounds (kurgans) and still preserved within them are some wonderful fragments of colourful silk clothing that those nomads wore. The Tanais Museum has some of these fragments on display, along with reconstructions and posters (in Russian), documenting the costumes.

Painting on display in the Tanais Museum, South Russia, showing the reconstructed costume of a woman of the Golden Horde. The caption reads: “Реконструкция нижней женской одежды”, which Google Translates as “Reconstruction of women’s underwear”.

And there she is. The Golden Horde girl with the silk bloomers is a highlight of the Museum. At least her clothes are. She was laid to rest in the late 13th – mid 14th century in the burial mound of Berboby log (Вербовый лог) which is located about 200 km further up the Don. You can see a map of many of the region’s burial mounds at this site. Berboby log is number 112. If you’re an ancient costume buff, or just have a bloomer fetish, this link will take you to a more detailed (in Russian) description and analysis of that costume. Her clothes consisted of silk pants (OK, they look like bloomers to me) over which was worn a knee-length shirt (think of the eastern ‘shalwar’).

The Museum has plenty to see. There’s even some high-tech, where if you stand in the right spot, you can see a digital image of your self on a screen – wearing some of the reconstructed clothing.

In the Tanais Museum you can stand on a spot and watch a screen showing you wearing a variety of reconstructed ancient costumes.

From Tanais, Olga drove us the 35 km further along to the modern city of Rostov on Don, and to her recommended Restaurant Pirs. We sat under umbrellas with a view over the ancient Don and had a lunch of dolma, salads and “assorted Caucasian cheeses”. The Restaurant Pirs is highly-rated and deservedly so.

The view over the Don from the Restaurant Pirs, Rostov on Don.

In about 24 AD the Greek geographer Strabo wrote (reproduced from Bill Thayer’s website) that Tanais was:

“a common emporium, partly of the Asiatic and the European nomads, and partly of those who navigated the lake from the Bosporus, the former bringing slaves, hides, and such other things as nomads possess, and the later giving in exchange clothing, wine, and the other things that belong to civilised life”.

The city of Tanais is no more, and neither, we hope, is the local trade in slaves, but the civilised life is still there, just a bit further up the road.

Assorted Caucasian Cheeses, at the Restaurant Pirs, Rostov on Don.