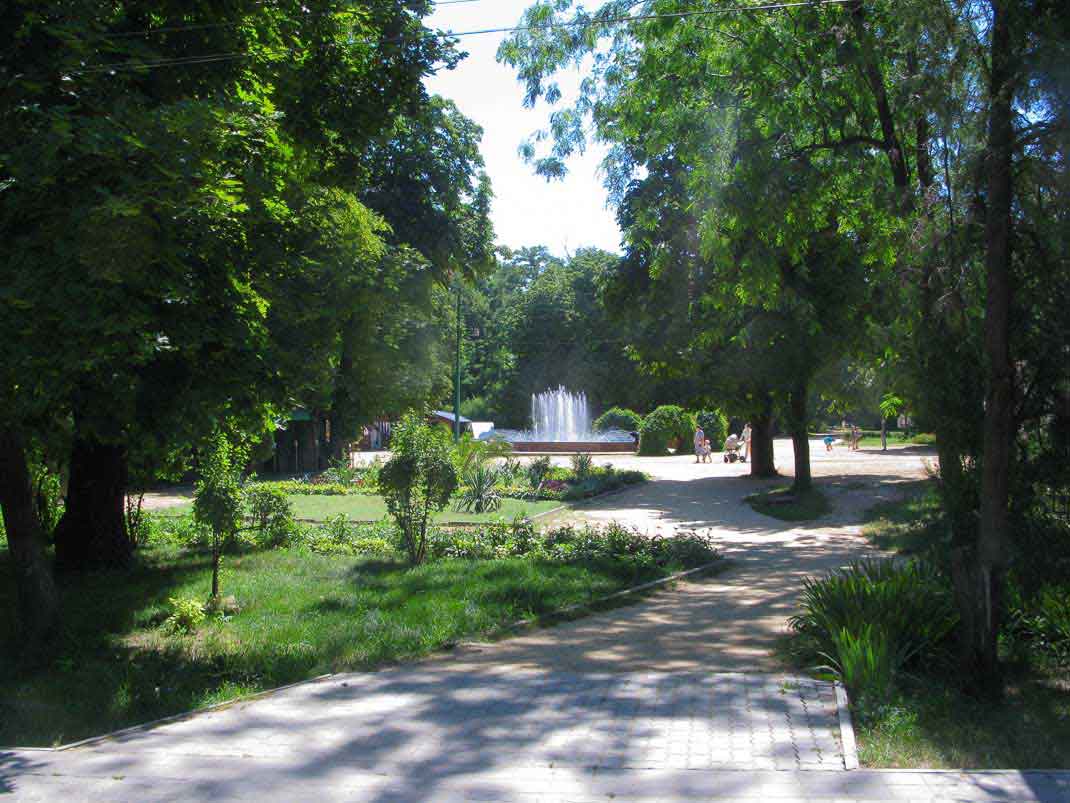 The man in the Taganrog Park spun around and said something at us. The only word I made out was ‘anglesky’  (‘English’)- the Russian had heard us speaking.

Taganrog is well off the route of the average Western tourist in Russia. We were in Taganrog because our guide and driver Olga Tikidzhan (see her contact details below) had suggested we come to her home town. We figured, why not? It was only after we arrived that she cautioned us that foreigners were unfamiliar here, and suggested we keep to ourselves.

Taganrog has actually seen plenty of tourism over the decades – but often of the wrong kind. It changed hands several times in the war with the Turks in the late 18th century, being totally destroyed at least once, was attacked by the French/Brits in the Crimean War, and was occupied by the Germans after heavy fighting in the Second World War, and then the Red Army took it back a couple of years later, no doubt with more heavy fighting.

An old house in a typically leafy Taganrog street.

Today the city is pleasant, nice and leafy, idyllic even, sitting on the edge of the Sea of Azov , about 50 km from the major city of Rostov on Don. I found that despite its past waves of destruction, Taganrog, like other Russian towns today – was full of endlessly photogenic old buildings and ‘forgotten’ corners. That there are still so many old buildings in Russia always came as a surprise, though perhaps it shouldn’t. My baseline tends to be Germany – and thanks to Allied carpet bombing, the Marshall Plan and heavy post war development after the war, there’s not much left there that’s original.

An old gate in Taganrog.

Olya took us to Cafe Albatros, right on the Azov shore. It was stinking hot and we sat outside, with soups, caviar and cheese, looking out over the water. It had to be done! The Azov was luke warm, still and shallow. The bottom was a mixture of slimy mud and sharper rocks, and I prefer not to think what else. I only got one cut on my foot, gingerly trying to get out to deeper water. But we survived ‘bagging’ another sea.

The view from Cafe Albatross, Taganrog, Sea of Azov in the background (don’t be alarmed, the horizon is actually flat).

Cheese, caviar and wine, at the Cafe Albatross in Taganrog.

The Sea of Azov, Taganrog, from the Cafe Albatross.

The huge down-town park (see the featured image) has various little cafes, a special children’s park, and a web of footpaths. It was walking along one of these, that we encountered the local man. Now I can recognise a few words of Russian, but useless beyond that. We did better switching to German, but he wanted to tell us something, and it was beyond me. He beckoned us a bit further along the footpath, a few tens of meters, through the trees, and then stopped, pointing down to some ovoid holes that had been roughly cut into the asphalt of the footpath. What were these? Enter technology. More specifically, the right ‘app’ on an iPhone. With this thrust towards his mouth, this totally Star-Trekie device, which translated Russian speech to English test, the story emerged.

About five years earlier, the Germans had come back, along with some old maps, fancy geophysical equipment, and more simply – a hollow-tipped stick. At some point in the Second World War, German soldiers had been buried here. I suppose in the middle of a war, the park was one of the few places where that was possible. Using the surviving information as to roughly where graves ought to be, the geophysics to indicate differences in soil properties – and probing with the hollow stick to bring up bone chips, the Germans narrowed down their search. The remains of several soldiers were located, some now under the footpath, where they were dug up through as small a hole as possible, and repatriated back to Germany.

This was all explained via that iPhone. We learned more, that the man had a daughter studying in Germany, and was an engineer. I asked if I could take his portrait, but after a few seconds of consideration, said no, adding, as an apparent reason, that he had been in the army. We parted and went separate ways. I looked at the park in a different way – now trying focus past the trees to the ground itself. Contrast from the bright sun made it hard, but my guess was the park had probably never seen any landscaping since the war. Under the trees the ground was uneven – quite possibly cratered. The trees had just been left to grow and the footpaths laid. It was a continuity with what had happened here about 73 years before.

The remains of an old tree in the Taganrog Park – it had a hard life and probably lived through the war.

Several trees along the paths had scars on their trunks. I’d noticed something similar before, in a Warsaw Park, and wondered then  – was it war damage? Some of the Taganrog park trees had evidently died not long ago and had been sawn off at the ground, and acorns planted to replace them. The annual growth rings are sharp, but there are a lot of possibly ‘false’ rings as well. As best I can tell from counting those rings, the trees were around in the war, but the scars are more likely from the 70s or 80s.

Foreigners are definitely a novelty in Taganrog, but the locals seemed both curious and interested. But that guy, I saw him a little later. He had only walked away a few paces, and was standing stock-still, at the edge of the trees, watching us…