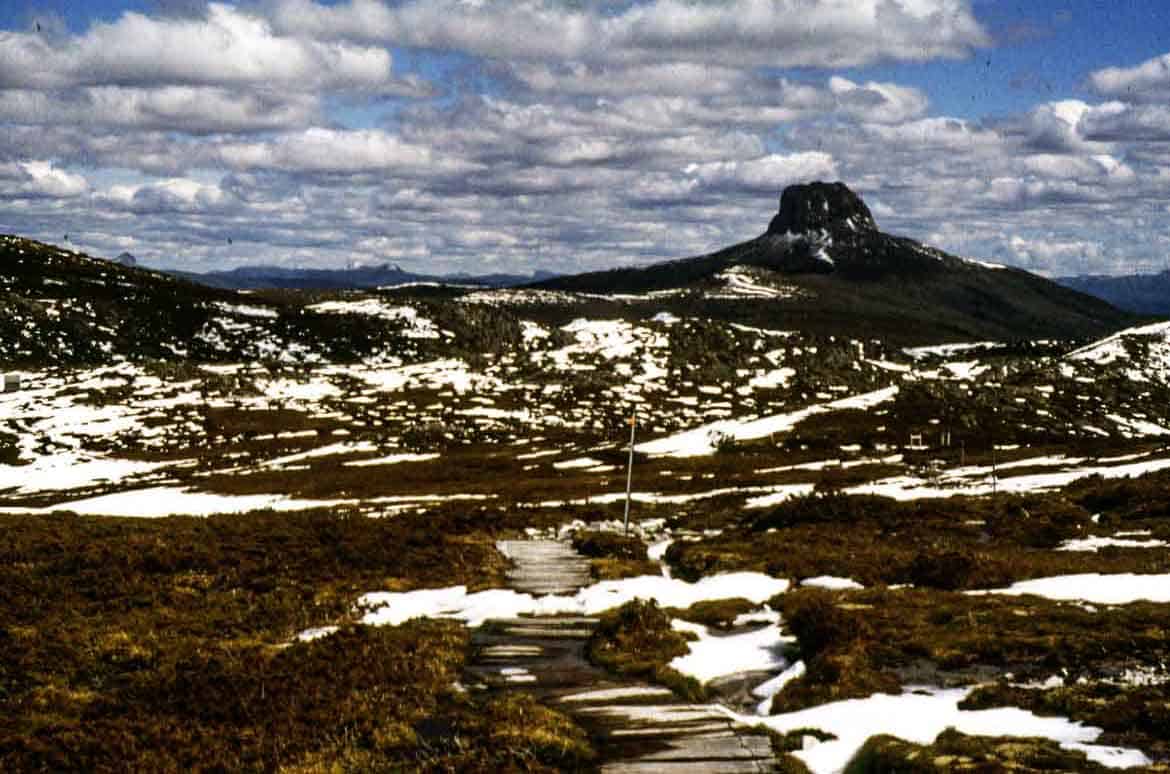 “Has any one seen the guy in bare feet and a track-suit? He’s mad”

Kate and I were reasonably experienced back-country walkers and we were expecting some bad weather on Tasmania’s Overland Track. We had carefully selected clothes, a tent, and sufficient food for our walk of over a week to the south. In fact, we had chosen to travel in the still-cold October specifically to avoid the high number of walkers later in the season.

Before we left at Cradle Mountain, the north end of the Track, we checked in with the Park Ranger. This is both a courtesy and a safety precaution – Tasmania’s weather (very like New Zealand) can be grim. In the mountains you can survive being cold and uncomfortable, or wet and miserable. But being cold and wet is a formula for a rapid death from hypothermia. The National Park authorities prefer this didn’t happen, and do what they can to mitigate the risk.

Satisfied with us, the ranger shared an anecdote about a group of young Japanese women setting off on the trail. He’d asked them a few questions to test their competence. There was lots of smiling and nodding of heads. But after they left, something still didn’t seem right. He went out to look and saw the group tottering up the mountain path clutching their gear in plastic shopping bags.

Setting off towards Cradle Mountain at the north end of the Overland Track. The weather is fine, with clouds.

We set off in fine, but cloudy conditions, walking over the flank of Cradle Mountain’s columns of Jurassic dolerite and towards the distant landmark of Barn Bluff (see the featured image). That first day was a short one, and we spent our first night in Kitchen Hut. It’s an emergency shelter, so not strictly legal, but there was no one around to see.

However, the next day the weather deteriorated, and just as things really packed up, we reached an empty Waterfall Valley Hut. With rain, hail and some snow, this was fortunate timing. Inside the hut, what caught our attention was the last entry in the log book, from that morning. A woman had written. “Has any one seen the guy in bare feet and a track-suit? He’s mad”. Well, we thought, if he is outside like that in this awful weather, he is in trouble.

On the way to Waterfall Valley Hut. The weather is closing in.

Walking barefoot is not my thing (I have a vulnerable big toe) but it seems to suit some people . In his book ‘Hike Your Own Hike’ Francis Tapon writes in admiration of the “legendary Barefoot Sisters” who walked 1,300 miles of the Appalachian Trail in the US in bare feet. But other than that quirk, they would have been well equipped with clothing and food.

As we were digesting this worrying comment in the guest book, the hut door burst open and a very wet young man barreled in. He was an Italian. He had a very small, ripped plastic poncho over one shoulder (was wearing boots), but was soaked through. As he dripped copiously all over the floor, he told us that he’d heard that there might sometimes be bad weather on the Overland Track -but figured if he put on five layers of T-shirts, he’d stay dry.

He peeled off his soaking clothes as we cooked our dinner. As we ate our warm meal, we watched, incredulously, as he opened a can of baked beans, and ate them cold. He had nothing to cook or boil water in. We asked if he might like a cup of coffee? (Yes, he would). The next stunner was to see him pull out two hard cover text books – on robotics. He needed to “do some swat”, he explained.

We left the Italian next morning. The weather was still unpleasant, and we diverted to have a quick look in another hut not far along the trail (Cirque Hut, removed a little later) to see if the barefooted one was sheltering there. But it was cold and empty – with no sign of anyone having spent the night. This was alarming – there had been a death from exposure on this very stretch of track back in 1971, and others had occurred in the Cradle Mountain area.

Somewhere on the Overland Track, wet. cold and snow on the ground.

Much of the Overland Track is across a subalpine moorland of peat. It’s a fragile environment and suffers easily from the effect of concentrated foot prints. Boardwalks have been built over very long stretches of the track to prevent further peat erosion. But in places where they were absent, the track had turned into a quagmire. There were places where walkers, wanting to avoid the deep mud, had deviated further and further to the sides until things looked like a herd of elephants had passed through.

Pressing on, we made it to Lake Windermere Hut that afternoon. There we found a group of cheerful kiwi guys who had walked from the south. As a conversation starter, we asked them:

“Have you seen the guy walking this in bare feet?”

They were evidently in awe.

Later in the day the Italian guy rocked up, and announced that because his jeans – the only dry clothes he had left, were now dirty, he would have to wash them. But there was no more news of the guy in bare feet.

An un-boardwalked section of the Overland Track. The peat has been worn away to expose rocks.

The following morning the weather had improved. The kiwis packed to continue north, the Italian stayed in bed, while Kate and I kept on towards the south. We kept wondered about the bare-foot guy and just what we would find if ever we ever caught up with him. Was he some kind of lunatic?Then, around mid day we met a lone traveler, a man, coming towards us.

“Have you seen the guy walking in bare feet?”

And so, a couple of hours later, at New Pelion Hut, we finally met this legend, an Australian – let’s call him Jefferson. The young man had dreads down to his waist, was, as reported, barefoot, and his only clothes were track suit pants and top. His sole equipment was a fertiliser bag to which he had attached a headband, two sheep skins and a plastic water bottle.

Jefferson was friendly, perfectly sane, and told us how he had come from the Australian mainland by ferry, and got off in Devonport with the intention of hitching to Hobart. That ought to be a pretty simple trip of less than four hours. But Jefferson had been under the influence of … something. A driver had picked him up, and somehow along the way, the plan changed. He was dropped off at Cradle Mountain, pointed himself south, and began to walk. He hadn’t eaten since arriving in Tasmania, but even so, it was only after some persistence by us, that he accepted two cracker biscuits.

The next day dawned flawless. Independently, the three of us diverted off the main trail to climb Mt Ossa – the tallest mountain in Tasmania. Kate and I followed Jefferson as he plodded ahead, barefoot, through snow drifts that were sometimes up to the tops of our thighs. At the summit it was cloudless and we could see right across Tasmania. Lying back up there in the sun, Jefferson announced he was starting to have a “religious experience”. This was hardly surprising – other than the two cracker biscuits we gave him, it was now at least four days that he had been walking without food.

The bare-foot walker on top of Mt Ossa.

This reaction is something that humans have actively sought out for millennia. In his book ‘A Branch from the Lightning Tree: Ecstatic Myth and the Grace of Wildness’, Martin Shaw relates how he takes groups of young people into the Welsh wilds – where they will split up, and alone, without tent or fire, fast for four days and nights. The results, both immediate and for personal development, are apparently remarkable. Our companion was doing this – and walking down the spine of Tasmania.

We parted with Jefferson there on the mountain. He was happy, showing no signs of physical problems and was in no immediate danger. Our next hut was Kia Ora, where there was a whole squad of Australian Army artillery solders, along with their sergeant major. It seemed that, with a woman in the hut, he may have given his boys a few quiet words – and they were awfully, awfully polite. The evening was a surreal experience of watching these solid army types, sitting around the common table – playing “Pigs” – without a hint of a profanity escaping their lips. Pigs? It’s a game played with two little pigs instead of dice. There are points for the ways the pigs fall, with top scores if they fall in the ‘makin bacon’ position, or disqualification if they end up in “unnatural positions for pigs”.

Further south the Overland Track winds through fairy-tale rainforest with ancient moss-covered pines. We dallied some extra days in a side-valley before finally finishing the track at Lake Sinclair. We checked out with the ranger there – and asked him about Jefferson. He knew exactly who we were talking about. Enough walkers had called in with tales of being unsettled by this chap, that he had sent a boat up the lake to find the barefoot adventurer, along with a bag of apples and instructions to to “Get in”.

Fairy-tale rainforest in the south of the Overland Track.

Back in Hobart (Tasmania’s capital city) a week or so later, and by complete chance, I came across Jefferson again. He had found an empty house to live in and was happy as Larry. He explained to me how walking barefoot can keep your feet warm. It’s the constant movement of your soles against the ground. But the problem was that he had developed blisters under his thick callouses. He was now taking it easy until his feet mended. I never saw the Italian again – hopefully his swat paid-off and he has a high-powered job in robotics somewhere.

That Overland Track was a kind of microcosm to what is going on all over the world on lots of paths, right now. Some of them are real tracks, some of them roads, and sometimes not either. But in each one, someone is having an adventure. Sometimes it’s by choice, sometimes more by accident. Mostly everything turns out OK – after setting up all the challenges, the Universe seems to prefer it that way  (just sometimes survival seems like dumb luck!).  As they finish each traveler comes away a little the wiser, with a little more understanding of how the Earth works, and with a story.