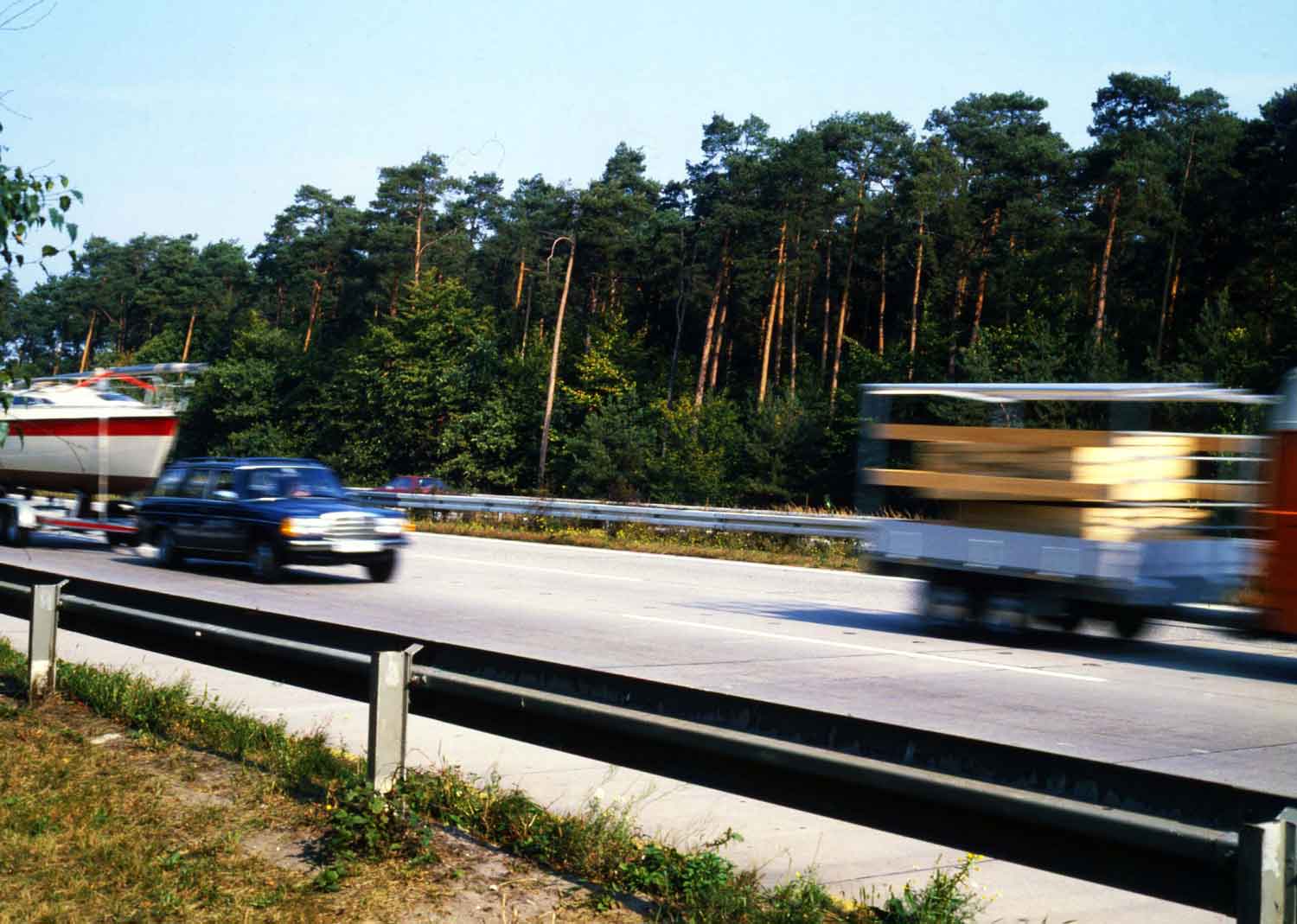 The key to hitching in West Germany, as one quickly learned, was the free booklet that you could pick up at any autobahn service station. Specifically, it was the center two pages. You could pull them out and ditch the rest. Those pages opened out into a map of the West German autobahn system and the location of its service stations. For plotting one’s route over the country, this free map was pure gold.

German hitch hiking was all very orderly. Once you’d found your way on to the autobahns (an art in itself), you typically moved between service stations. On being dropped off at one, you could first duck in to grab a Mars bar (In their vending machines they were once a Deutschmark a piece – about a dollar, but disreputable antipodean travellers had caught on that New Zealand and Australian 10 cent coins worked just as well) then back out to join the queue.

The first hitcher in the service station queue stood on the on-ramp as close as possible to the official start of the autobahn (the autobahn sign). Beyond that point, pedestrians were verboten. Later arrivals took up position further away. West Berlin was slightly different. Because so many hitchers were waiting to make the run through the East German ‘corridors’, there were no queues as such – just a line of 50, or 60 people, all holding signs as to where they were heading. Drivers walked along the line until they found someone going their way.

Often you held up a piece of card with the number-plate letters of where you were going (HH = Hamburg for instance) but of you still had a long way to go, you just stuck your thumb out for anything going in the right direction. A cardinal rule that various hikers emphasised was ‘Avoid the Ruhr-Gebeit’. This is the amazingly complicated spaghetti of autobahns in the industrial west of West Germany. That rule sounded very sensible to me.

The complicated mess of autobahns in the Ruhr-Gebeit. My nemesis, autobahn station Ville can be seen between Aachen, Bonn and Koln (Cologne). Unless they have good reasons otherwise, hitchers are advised to stay well clear of this area.

German hitching can be very fast – there are no speed limits on the autobahns. On one trip, heading south to Frankfurt, I was picked up by a Canadian woman, with a husband in the military. She was hammering her old station wagon along at 160 kmph, to which it responded by vibrated violently, while she kept turning around to tell her kids in the back seat to “Shuddup!!!”

However, her speed was easily topped by a ride in a Mercedes – where we momentarily hit 239 kph. At that kind of speed, everything starts to look like the start of and old Star Trek episode, just as the Enterprise moves to warp-speed. Everything streaks out from a point a good kilometer down the bahn – on which the driver has his or her attention glued. You hope. Actually, this driver was playing the futures market with one of those old car phones. It kept cutting out and he would slam it into the dash screaming “Sheisse!!!”

Now at those speeds, when something does go wrong, it goes wrong big-time. Now and again I noted that the autobahns were decorated with great clusters of tyre skid-marks. It was the ones ending in patches of molten tarmac that got my attention.

But mostly these speeds are possible because German drivers are trained well, have rules, and stick to them. Usually nothing unexpected happens on German autobahns (Alles ist in Ordnung….). Usually, that is. There was that driver from a certain ‘eastern bloc’ country who drove erratically (stuck his head out the side window while screaming and spitting at a car over taking us), announced he had only been in Germany for a few weeks – and had no license, and then finally rear-ended a young woman just as we arrived at our destination. The autobahns aren’t designed with that kind of wild-card in mind. Or (some) hitch-hikers I would add.

The view down onto the market from the Freiburg Cathedral.

Early one fine morning, I set out to hitch north from Freiburg to Hamburg. Nothing difficult about that, I should have arrived in the afternoon. A van soon pulled up with some cheerful young people in it.

“Hamburg? No problem, get in – we’re going to Cologne”

“Oh don’t worry – we can drop you off at the perfect spot!”

The accursed place they left me was Ville autobahn station. It was right in the middle of the triangle of Aachen, Bonn and Cologne. Smack-bang Ruhr-Gebeit. It quickly became apparent that it was a dead-end. The few other hikers had been there all day. Ville was the place where only cars going into one of the major cities might pull in. There was no real through traffic.

The rest of the day passed and nothing happened. Night-fell, and then, with no options, we all retreated into various parts of the bushes to try and sleep. Hours later I was awakened by someone staggering in looking for a secluded spot to have a pee. He nearly tripped over me.

Next day, the queue just grew longer. One chap had given up entirely and just gone to sleep, propping his destination sign up on his pack. A couple of girls arrived, and instantly got a lift. Then, somewhere around mid day, I decided it was time to take affirmative action.

I figured that the only way out of this mess was to head way back south, and then get back on to the simple route north to Hamburg. But the only way to do that, was to get to the twin service station on the other side of the autobahn. And that, was a problem inviting multiple skid marks. Autobahn stations are usually only accessible via the autobahn -there is no walking access. The corresponding station on the other side of the autobahn was as isolated as any other.

Heaving my pack onto my back, and my day-bag on my front, I waited for a gap in the autobahn traffic, then went for it. I staggered across all three lanes to the median strip, put up with the inevitable blaring of horns while I waited for the next gap, and then sprinted across the next three (see the featured image). From there I legged-it the few hundred meters down the forbidden edge of the autobahn until I reached the service station for traffic going back to the south.

I had just made it when a small van pulled up with a man and a woman in the front. I told them I was heading for Hamburg and they cheerfully showed me the back of the van. The back was bare, and sealed off from the driving compartment. There was no way to speak with the drivers, and the only connection was through a pane of glass in the wall. Other than that, my view was backwards.

Red lights started flashing in my head. If I was following a clearly defined system of hitch-hiking rules, and by now it should be clear that I wasn’t, I wouldn’t have got in. But hey, this was my first lift in over 24 hours, and I wasn’t about to look a gift horse in the mouth. I hoped in, the door was slammed shut and we were off. I lay back on the floor of the van and relaxed.

It was some time before I sat up, and thought to try and read road signs and work out where I was. It wasn’t easy, as there wasn’t much view forward, other than of the drivers backs, while looking out the back window, I could only see the signs after we had passed them. However, soon an awful realisation dawned – Saarbrucken! We were heading for bloody France!

I hammered frantically on the window and the startled drivers pulled over at the very next service station – putting me back in exactly the same predicament I had just gotten out of.

Exasperated – I ran across my second autobahn.

I barely made it to the ramp leading onto the north-east bound autobahn when a truck pulled up. The driver spoke no English, but he didn’t have to. He was heading in the right direction. I struggled with some basic German until we arrived at an autobahn intersection on the edge of the city of Koblenz. Here, he did something totally unexpected – and very illegal. As he was going one way, and I another, he simply pulled over to the side of the autobahn, and indicated this was where I needed to get out. Not wanting to take my chances encountering the Polizei a third time, I quickly skidded down the autobahn embankment, and found myself in the back-streets of Koblenz.

This was a damn nuisance! Now I was right out of the autobahn system, and hadn’t the faintest idea how to get back onto it from the streets that I now trudged. But the first person I met was a young woman, who thankfully, spoke English. I asked her for directions to get back onto the Autobahn. “No problem!” she said, and told me to go and wait behind a tree. She stuck her thumb out, the first car stopped, after a few words with the occupants, and she motioned for me to re-appear. The driver appeared nonplussed and after waving my thanks to the young woman, I was on my way again.

To cut the story short, it wasn’t until the next day, the third day after leaving Freiburg, that I finally made it to Hamburg.

I did learn a lesson: there are times when going forward, means needing to go back a little.

But please, don’t ever run across Autobahns.

A sundial on the wall of one of the old Freiburg houses.