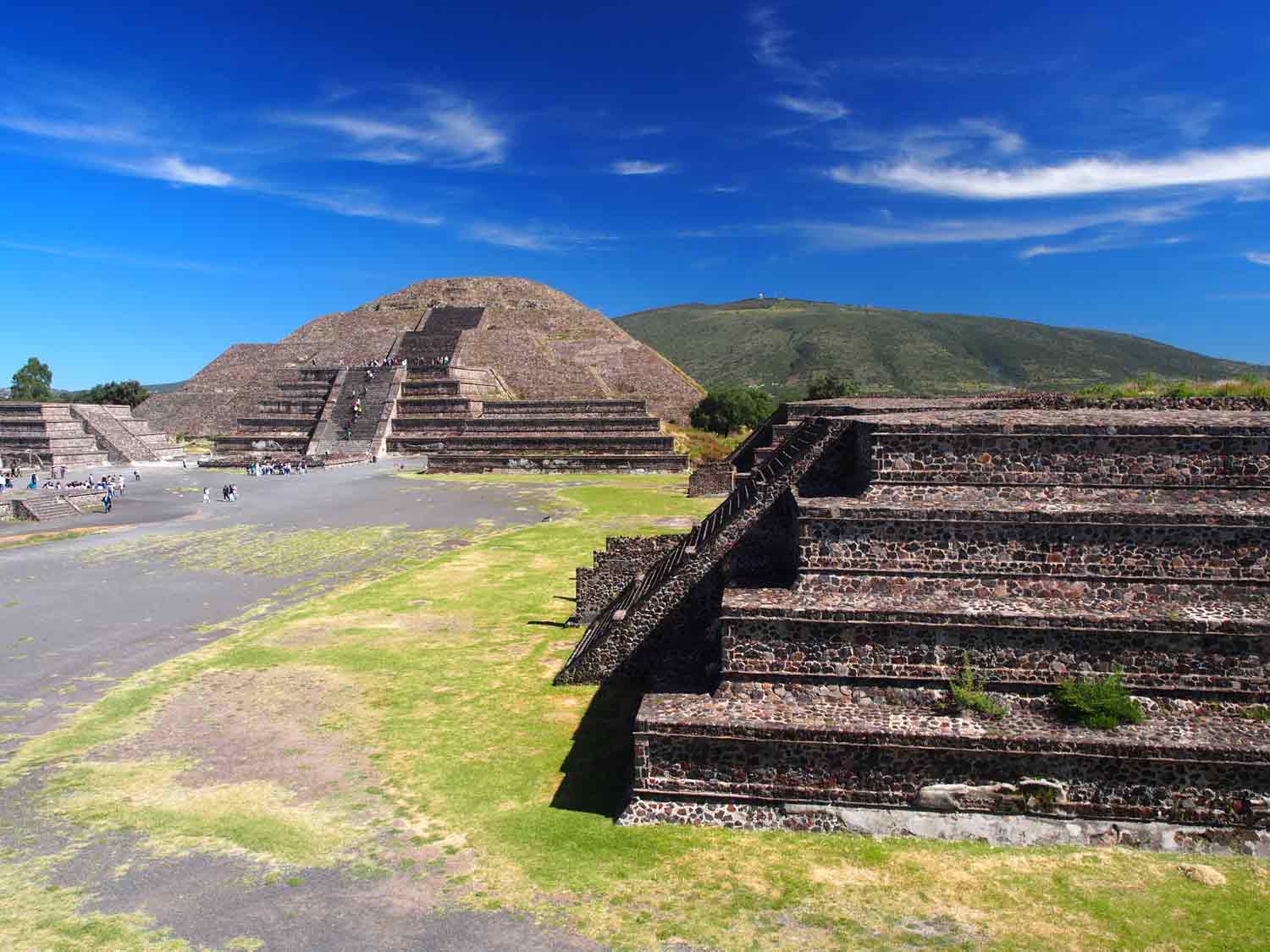 Mexico City’s National Museum of Anthropology is simply stunning. It’s task is to somehow present the bewildering range of peoples, cultures, languages which are, and have been, in this huge country. It does this in the range of usual ways: sculptures, textiles, photos, cinematic projections, reconstructions. When I visited (fortuitously on a free admission day) there was a temporary exhibition on The Maya Codex of Mexico. The original documents were on display in a sealed container of argon gas. There was an informative projector display of the details, and a whole wall devoted to making the imagery and analysis available to sight-impaired people. The museum has two levels, surrounding a huge courtyard. Each huge gallery focuses on a topic such as a time period, or a region of Mexico.

A wall of Mexico City’s National Museum of Anthropology devoted to displaying The Maya Codex of Mexico for sight-impaired people.

Details of the The Maya Codex of Mexico display for sight-impaired people. Portions of the Codex are presented in relief, and information in Braille.

Entering one small room, there were just two Star-Treky chairs. Beside them, a table held two ski-mask like devices and headphones. I picked one mask up and turned it over my my hands. There was no obvious way to ‘make anything happen’, but a security guard near the door urged me to put it on. Immediately, the room was gone – and I was flying over the pyramids of the vast Teotihuacan archaeological site. I could turn my head in any direction – side to side, straight up, straight down – everywhere I looked, I was seamlessly in another part of the world. I could even turn right around in my chair and look behind me. Instead of a blank wall, I was looking at the landscape behind me. Then the video being projected into my eyes changed – now I was watching and listening to an on-site lecture by an archaeologist. If I got bored with him, I could turn and look around me again.

There was no interaction or control. I couldn’t decide where to move, only where to look. I couldn’t see my hands, or touch or move anything. The visual resolution wasn’t great, but it was pretty darn good. As an example of ‘virtual reality’ the demonstration in the National Museum of Anthropology is fairly basic – but these technological things have a habit of improving scarily fast.

Now, Ernest Cline’s book ‘Ready Player One’ is not one I would normally choose to read. But here’s the connection. For years, I‘ve struggled to learn various aspects of computer graphics. I’m interested in the potential for computer technology to bring ancient history to life. How I can reconstruct a rusty or tarnished old piece of jewellery and make it look ‘real’ again – as well as the textiles or costume it was worn with, and then put the lot on a person. This is all entirely possible now, the limits are only my skill levels. I spend time on YouTube following the tutorials of a range of experts. One of these is Lori Griffiths, who has a channel specialising in digital costume design. On her website, she wrote:

“I am a huge proponent of virtual reality and have understood its potential for a very long time. If you haven’t read the book Ready Player One, you should. That’s where we’re headed, it is only a matter of time.”

On that recommendation, I read Ready Player One – and both enjoyed it, and also got Lori Griffiths’ point (I also watched the movie – it’s very different from the book, but not-bad either). Ready Player One involves a dystopian future Earth – where, to escape from grim reality, pretty well everyone plugs into virtual reality. In that virtual reality, ‘players’ can interact with the virtual expressions of other players, not just sight and sound, but (via a ‘haptic suit’) touch and smell as well.

The day after my museum experience, I visited Teotihuacan – the real one. From the historical centre of Mexico City, it’s an hour or so by bus. That bus ride takes you through the pretty grim reality for much of Mexico City’s inhabitants. I headed out reasonably early – arriving around 09:00. At this time, there aren’t many other tourists climbing the main pyramid – the Temple of the Sun. The rock steps are high and steep, and in combination with the altitude (around 2,250 m), and if you are testosterone-impaired (which dictates that you must appear to stride up effortlessly) you reach the top and practically drop dead from lack of oxygen.

There were a dozen or so people up on top, doing the usual selfie-stuff, and with lots of room to spread-out. I sat around for half an hour or so, trying to imagine what the place looked like a thousand years ago, when Teotihuacan was the religious core of a city of 150,000 or even a quarter of a million people.

Descending the Temple of the Sun is almost as hard as going up (hard on the knees) and once I did this, I took a leisurely deserted back-path around to the Temple of the Moon. By this time, the Temple of the Sun, which I could see in the distance, had filled up. The steps looked like they were solidly jammed with people, while at the top, it was standing room only. The mass of people only seemed to decrease around mid-day, as the heat combined with everything else.

The line of tourists (look at the skyline) climbing The Temple of the Sun is increasing. And hour from now – it will be chockers….

I’m no ‘gamer’ (beyond spending ten minutes once in a blue moon running round a twenty-year old piece of software for the odd bit of diversion), I’d rather stick to exploring the real world than blowing-away baddies in a fake one. But I’m also leery of missing out on big-things.

Two positive reasons for virtual reality come to mind – one is the potential to reduce the number of tourists in these key,‘must-see’, parts of the world. In some places, the mass of visitors (yes, I’m one of them) today are overwhelming the local infrastructure, the environment, not to mention the jet-fuel burnt to get there, and is increasing rapidly. It won’t be for everyone, but an effortless virtual trip might be the tonic.

Time away from the crowds – a quiet dirt track with the Temple of the Moon in the background.

Much as I like exploring the real world – I’m limited to the here and now. I see archaeological ruins, artefacts, or city-scapes where there was once forest. My imagination (I do have one, despite one English teacher declaring that I didn’t) is only so good. With virtual reality comes the possibility of time-travel, or as near to it as we are likely to get. One day we may be able to ‘see’ the people of Teotihuacan’s ancient past, and marvel at their costumes and jewellery.

You may loathe the idea of digital virtual reality – and there are indeed plenty of reasons to put effort into our real world, to explore it, understand it, and fix what we’ve messed up. But I also think that Lori Griffiths is right – this thing will come anyway.

Are you ready for that?