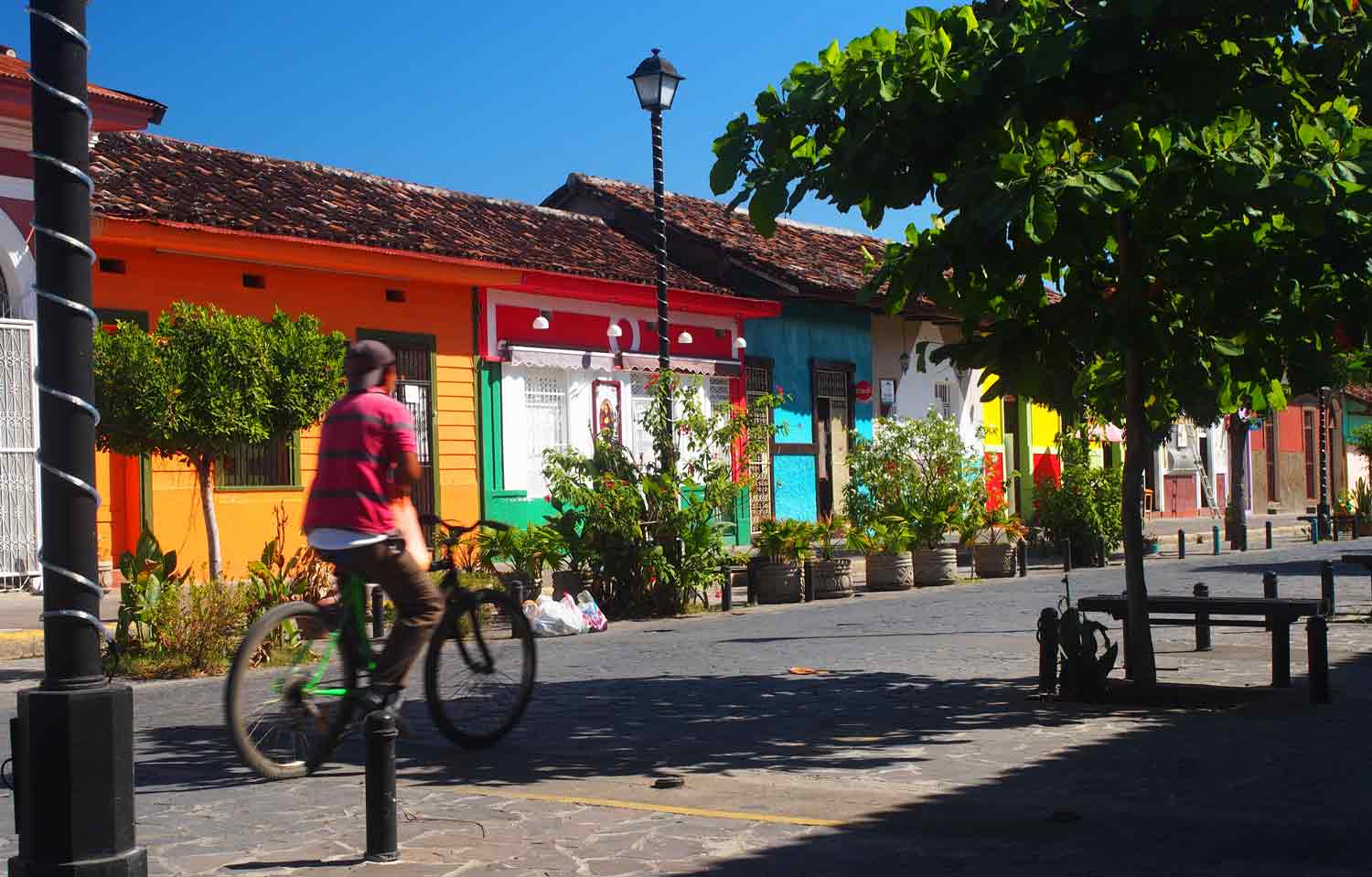 The news coming out of Nicaragua back in October 2018, was uncertain. Violence from the political situation seemed to have abated, but various travelers and locals were reporting that the tourism infrastructure was in chaos. Hostels had closed down, buses weren’t running, etc.

I went to Guatemala in October, to be based there for a bit over a month. If there was any chance of having a quick visit to Nicaragua after that time, I certainly wanted to give it a go. This is what eventuated….

Come November I bused from Antigua, Guatemala, to Santa Ana, El Salvador. After a few days there I traveled on to the capital, San Salvador, and got on a late night Tika Bus to Managua. That was straight-forward, but I was heading on to the more picturesque town of Granada. So from the Tica Bus terminal in Managua, I took a local bus to the Terminal de Autobuses Mercado Roberto Huembes. It’s quite a few kilometers away, requires a little local change, which I didn’t yet have – so the driver waved me on anyway!

I boarded a ‘chicken bus’ there and reached Granada after dark. From there I zig-zagged my way along more or less darkened streets to the delightful Hostal De Boca en Boca. It’s a nice, central place and I highly recommend it. The staff are pleasant and very helpful, there is breakfast, an internal courtyard with couches hammocks and cats.

There were about ten other travelers there. Before the troubles, so the staff told me, there would normally have been 80. The economic reality there, of course, has been cut-backs in employees and reduced-hours for those remaining.

Just across the road from Hostal De Boca en Boca is the equally delightful Gallo Pinto Cafe. It has a typical interior courtyard where you can relax with a latte, as well as something traditional, like nacatamales, or drink tiste – a “corn-based drink with cinnamon, cacao”. The staff are friendly and I spent several hours in there over a few days, reading. Typically I was the only customer. One time I did meet someone else, they were familiar with Granada before the current political issues. They described the place now as “like a movie set”.

The main street in Granada, leading down to the lake, is lined with bars, restaurants and travel agencies and travel agencies in the upper blocks. Perhaps half of them are closed (see the featured image). In the old days, the street would have been packed.
One morning I walked past all the bars and down to the lake shore. Other than one cleaner sweeping the path and one person I spotted on a park bench – I was the only person around.

Hostal De Boca en Boca arranged for two of us to go on a night visit to Volcan Masaya. The guide drove us to the park just a few meters from the edge of the caldera – and we wandered over to look down into a seething mass of molten rock. There were at least a dozen other people up there, maybe twice that. But before the troubles – it would have been necessary to queue for a view. There are a few view points and most of them just had two or three people. The current lack of people meant you could appreciate the sound of the lava sloshing below you – and without an endless stream of camera flashed going off.

From Granada I went to the famous Ometepe Island. I walked to the bus station and was soon on a chicken bus. It went as far as the town of Rivas, from where I had to suffer the unavoidable fleecing (not much actually) by the taxi drivers to San Jorge, which is where the ferry goes from.

There was a good hour before the next ferry – so I settled at an outdoor table at the El Navegante restaurant nearby. From here I could look directly out at the two big volcanoes of Ometepe – Concepcion and Maderas.

Two other guests from Hostal De Boca en Boca appeared on the ferry. We were both aiming for the same hostel in Moyogalpa – Hospedaje Soma. I was heading there on the recommendation of a German traveler at Hostal De Boca en Boca, who said she had been the only person staying there. The three of us were the only travelers there. It was a terrific place – close the town center, nice staff, good breakfast, food, wifi, and cats.

Hospedaje Soma set me up with an expert local guide, Will Tijerino, who took me (on the back of his trail bike) to hike up to the cloud forest on Volcan Maderas.

When the three of us left Hospedaje Soma, there were no other bookings. The return ferry trip did not involve a ritual fleecing by taxi-driver. There was a chicken bus to Managua. I made my way (in daylight) by local bus from Terminal de Autobuses Mercado Roberto Huembes back to the Tica Bus Station (it’s not on the bus route, so you have to know where to hop off the bus and walk the extra blocks). I ate at a place on the street opposite the station, and spent the night in the Tica Bus Station hotel. It’s not expensive and with a God-awful early departure the next morning, was absolutely convenient.

So right now (end of December 2018), the parts and people of Nicaragua that depend on tourism are desperate. They’re hurting. I heard figures of around 20% of their usual tourist numbers. Don’t look at this as a ‘bargain’ and a way to drive prices lower – think of it as crowd-free travel. Nicaragua’s loss has been Costa Rica’s gain. But travelers from Costa Rica who did venture north, told me prices in Nicaragua were four-times less (and others said that was an under-estimate).

It was a short visit, and I didn’t stray far from the beaten-track. But based on that – now is a good time to travel to Nicaragua.