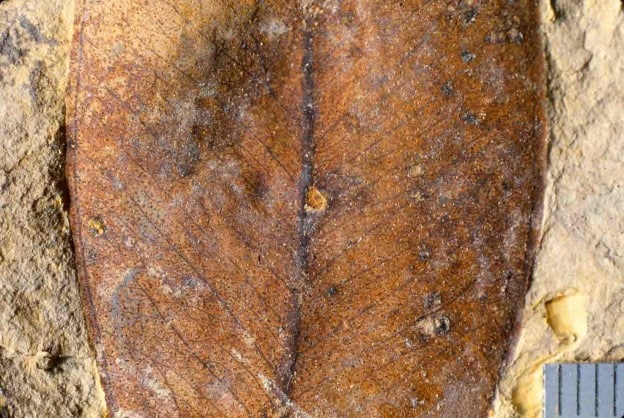 Eucalyptus (aka ‘gum-tree’) is the quintessential Australian tree. There are about 700 species of them today (depending on who you ask), all of them restricted to Australia, except for a couple that are in New Guinea. They range from cold mountains in Tasmania and Victoria, to tropical lowlands of the Northern Territory. They are in the wettest parts of Australia, the dry ‘outback’, but absent in the arid core. In some way or another they are probably all related to fire, and are absent from true rainforest vegetation.

While Eucalyptus species display a variety of leaf shapes, one of the most distinctive is an elongate, falcate shape. These are linked to the habit of the leaves hanging downwards, an adaptation to open vegetation, rather than closed, such as a rainforest. Eucalyptus fruits form distinctive ‘gumnuts’, that have a characteristic flat rim formed where a kind of lid detaches to let the seeds out.

Eucalyptus is one of the distinctive Australian biota that has suggested that Australia developed in isolation from the rest of the world.

New Zealand lies across the ‘ditch’ (the Tasman Sea) from Australia – relatively nearby, but its vegetation is markedly different. It does not have native Eucalyptus (although there are many imports growing about the country now) and probably as a consequence, lacks the all-important fire ecology of Australia.

However, Eucalyptus pollen was suggested to be present in some New Zealand plant fossil deposits a few decades back. Either the name appeared in lists with no data to back it up (Mildenhall 1980), or suggestions were made that some fossil pollen species might have been produced by Eucalyptus. Pollen is often not distinctive at the generic level, and I did get told once that a certain form of pollen would be unhesitatingly called Eucalyptus – if it was found in Australia. But if the same thing turned up in New Zealand, it would most likely be called Metrosideros. So without being able to nail the identification definitively, and at the risk of being jumped on by outraged Australians (national pride was at stake), claims that Eucalyptus once existed in New Zealand were kept low-key. Pioneering New Zealand palaeobotanist Aline Holden (1983) claimed Eucalyptus leaf fossils from near Roxburgh at a conference. I wasn’t there, but I understand the reception was not good, and no formal publication ensued. It didn’t help that at the time Australia seemed to be suspicious of its own record of Eucalyptus leaf fossils.

In the early 1980s I was lucky enough to find numerous fossil leaves in an Early Miocene deposit along the Kawarau River, near Cromwell (Manuherikia Group). The leaves were elongate, falcate, had a clear intramarginal vein, and some were covered with the little spots of oil glands that almost invited a scratch and sniff test. The clincher was a single ‘gumnut’ consisting of three capsules with flattened rims. Together this seemed to be the critical mass to accept them as Eucalyptus (Pole 1983).

Eucalyptus leaf fossil from the Early Miocene of Kawarau River, New Zealand. The leaf is shown in a ‘conventional’ orientation, with the petiole end at the bottom, but in life this leaf probably hung the other way.

The presence of Eucalyptus in New Zealand virtually demands a significant  ‘fire-regime’ was operating. Indeed, palynologists had already recognised that much charcoal was in the general rocks containing the Eucalyptus leaves (Mildenhall 1989). So this much seemed to making be making sense. New Zealand’s paleobotany was suggesting that at times or places, the ecology may have been much more ‘Australian’ than some would care to admit.

How long had Eucalyptus been in New Zealand? In 1994 I published descriptions of some fossil leaves and fruits collected by Jonathan Aitchison from Livingstone, near the Danseys Pass in North Otago. The leaves include some with a remarkably elongate shape, sometimes falcate, and despite being very leached, an intramarginal vein could clearly be seen on some. Due to the poor preservation I was less confident and published them as ‘aff Eucalyptus sp.’ (Pole 1994). Associated fossil fruits were also comparable to Eucalyptus, but to other Myrtaceae genera as well. The Livingstone fossils are of early Middle Eocene age – about twice that of the Kawarau River specimens.

One of the Eucalyptus-like fructifications from the Eocene of Livingstone (finger gives scale).

The real bomb-shell came in 2011 with the publication of undoubted Eucalyptus leaves and fruits from the Early Eocene of Patagonia, South America. Not only had Eucalyptus once extended far beyond the Australasian region, but the Patagonian material was the oldest Eucalyptus known. This record makes it much easier to accept the New Zealand plant fossil records, and I’m now more confident that the Livingstone fossils are Eucalyptus. Not only that, but rare leaves from the earliest Early Eocene of Kakahu, in South Canterbury, are likely Eucalyptus as well. Added to the Australian Eocene records, it seems like a very similar vegetation may have occurred around the Southern Hemisphere at the time.

The biogeographical significance of these fossils are part of growing evidence, the thin end of the wedge, that the distinctive Australian biota is due not to evolution in isolation, but because its relictual – stuff became extinct everywhere else.

Mildenhall, D. C. 1989: Summary of the age and paleoecology of the Miocene Manuherikia Group, Central Otago, New Zealand. Journal of the Royal Society of New Zealand 19: 19-29.