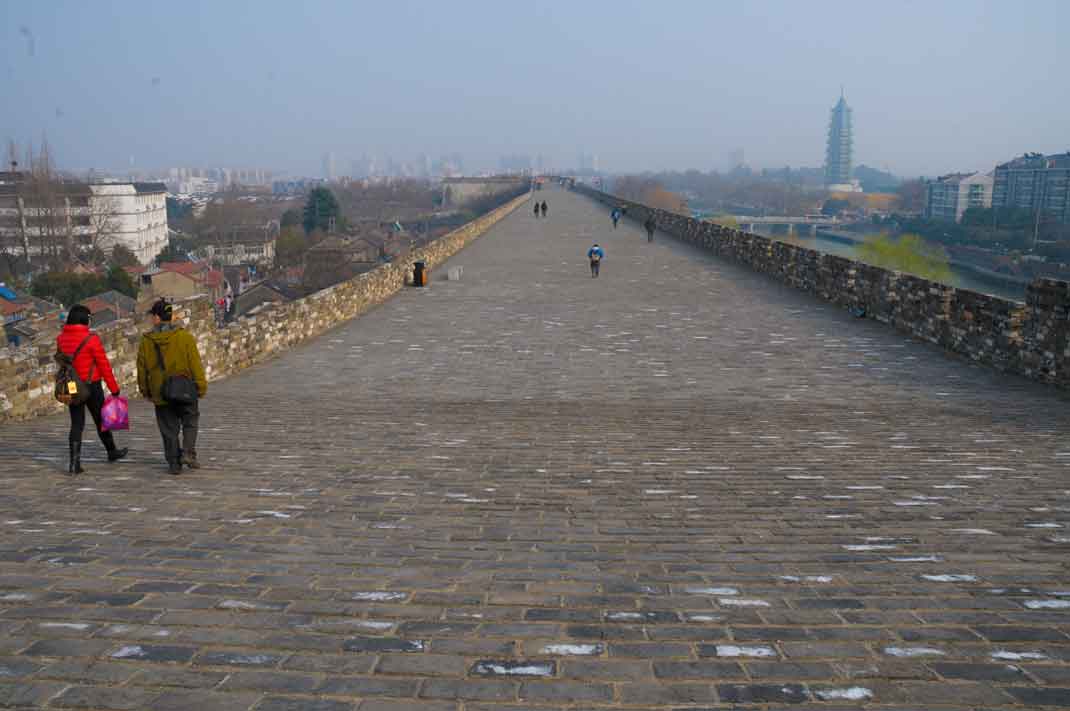 In Nanjing I waited for the Goldilocks time, not too cold, not too hot – to walk the entire Nanjing City Walls. The winter had been miserable. Snow, ice, rain, puddles. With no heating in my office, I sat and shivered with my feet on a hot water bottle.  In the lab, beakers full of liquid would freeze solid overnight. It was a penetrating wet cold, and not the time for a long walk around the city. On the other hand, the Nanjing summer is putridly hot. After a few months of cabin-fever, I made my break one Saturday morning, at the end of February, and couldn’t have timed the temperature better.

Nanjing’s walls, at least the main, inner walls,  were built between 1366 and 1386, on the orders of Zhu Yuanzhang, the first Ming Emperor. It is said that 200,000, or even a million, were in the  workforce. I found a surprising number of locals have no idea that their wall can be walked. For sure, it’s not all there, some sections are missing – and for these you just have to walk along where it once stood – but most of it remains. I guess few people make the whole trip, but it was something that appealed to me (I’ve also walked right around the Constantinople/Istanbul city walls).

My office was just a few hundred meters from one of the entrance points of the wall – the Jiefang Gate. However, the wall ticket booth doesn’t open until 08:30, so first off there was time for a coffee at a new Starbucks on Anren Road, a hundred meters or so north of Beijing East Road (It appears on Google Maps when you zoom in enough, but good luck actually Googling it). It opens at 0700 and the upstairs can be wonderfully deserted at that time. Hate Starbucks? Try finding somewhere else in Nanjing to relax with a latte, free wifi – especially, at seven in the morning.

From just behind the cafe, its a simple, 15 minute walk to the north east, to get to the wall. Once up the steps and onto the top of the wall, I turned to the left. Being in the north-east of Nanjing this meant I was opting for an anti-clockwise circumnavigation of the city. Within the ticketed sections, it’s very nicely done, with a few signs and descriptive maps, telling you how far it is to other landmarks, such as the various gates.

On the other side of the wall is the enormous Xuanwu Lake. It is artificial, though I guess it started as a natural river-side floodbasin that was then dug-out (or am I just underestimating the power of thousands of labourers?). Directly below the wall the land around the lake is all park – with people walking, ball room dancing, showing off their caged song-birds.

Father and son admiring caged song birds along the old course of the Nanjing City Wall.

But a far bigger distraction to me were the bricks. Most of the outer shell of Nanjing’s city walls are build of hand-made bricks. Thousands and thousands of them. On each, its maker was required to stamp his or her name, phone number and twitter handle (or whatever the equivalent was a few hundred years ago). The story is that if three bricks of any particular person later failed, the culprit could be tracked down and their incompetence would cost them their head. But to me, those personal details stamped on each brick were such a distraction.  Once I started photographing them, it was always hard to stop. So much variety! If only I could read them – there is surely a nice research project for someone, documenting all those details (and possibly some income on Etsy for framed rubbings?). But I needed to get on with the walk!

Hand made bricks from the Nanjing wall, stamped with their makers details.

From the end of that ticketed section, there was a bit of ‘cross-country’ to do. It started with a pleasant board-walk through trees and along the crest of a ridge, which I guess is the remains of the the wall core.  But this became a tiresome urban plod along Zhingfu, Huchengh, Jinchuanmenwai, Daqiao, and then Jianning roads, before I reached the entrance of the Yuejiang Tower complex (40 RMB) on Lion Hill, just after eleven.

This is the far north part of the wall-walk, it’s huge, and despite the long walk still ahead – not to be missed. I made a half hour detour up to the top of the temple – to look out across the river, the usual Chinese skyline of construction cranes, silhouetted in the smog.

The western section of wall is bisected by a few large roads. They are relatively minor irritations, where you have to wander inwards a little to find somewhere to cross. I took the opportunity of stopping for ten minutes in a little restaurant for some dumplings, and then at 1:30 I reached the ‘Stone City Park’ – it’s an open access area of pleasant garden and footpaths running for several hundred meters along the base of the wall (the wall top here is, I think, not accessible). Much of the wall here is made of stone blocks – and even some rock outcrop has been incorporated.

From the park there was a little bit more ‘cross-country’ (read, ‘walking along a major road), then a little before 3:00 pm I reached the entrance to the next ticketed wall section – the Jiqing Gate (50 RMB). Just inside I met a nice chap, one of the uniformed staff, who was keen to show me more good examples of stamped brick work. From there, the southern-most stretch of the wall is as wide as a road. But after leaving that ticketed section, around 4:00 pm – it was too late to get into the next (the section was still open, but no new walkers being allowed in). From there I just walked along the base. At first I tried to get along the inside edge of the wall. There was a foot-worn track that seemed like a good local short-cut, perhaps even a way to sneak up onto the wall? But it wasn’t, and after going 340 m, I found myself in a dead-end of wall, tall fence and back-yards, and had to retrace my way back to a road.

For another couple of kilometers, I plodded along the outer wall edge. I passed people out for their evening walks as it gradually got darker and darker, and it wasn’t until the very last section that things got a bit confusing. There was a gap through the wall, and another ticket entrance (well-closed of course), and I opted to cross and try the inner side for a change. But I quickly found there was no way to keep to the base of the wall. It was almost dark and I was getting into a mess of big roads and back-streets. I headed off on a bit of dead-reckoning, and although I had a GPS to indicate roughly where I was, and what direction home lay in, the alley ways went in odd directions. It was, of course, exactly the point where my batteries, after just three hours of use, went flat. I found a little store, and bought some new ones and kept going.

Three friends put their feet up on the Nanjing city wall.

At 7:20 pm, just short of 12 hours after setting off, I completed the loop. The full Nanjing City Wall walk was close enough to 40 km (the actual course of the wall is 35 km). I was pretty sore – walking on a hard surface is a lot more brutal on you than soil.

But 35 km of (mostly) hand-made wall? The full day it took to simply to walk it gave me a great perspective on their size. Twenty years of hard labour to build – and I’m sure, it wouldn’t have been just Goldilocks time!

Late in the afternoon, a girl and her dog play along the old course of the Nanjing city wall.