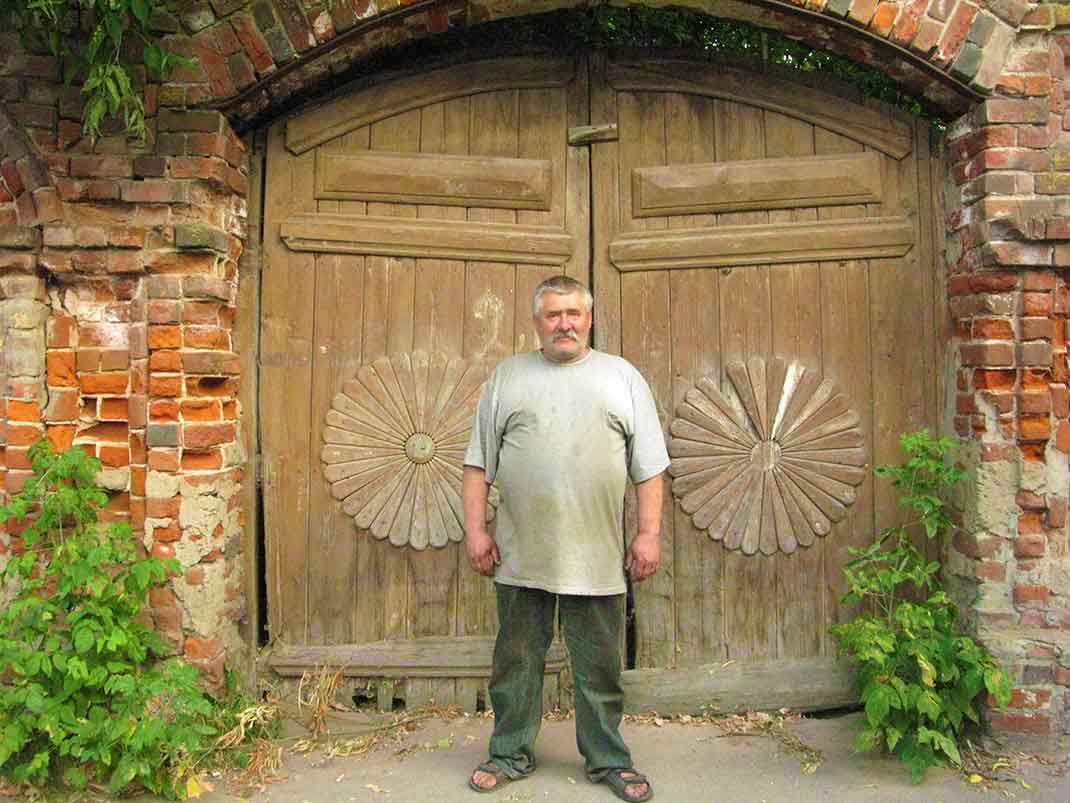 I admit it, I was lurking in the back streets of ‘Old Tartarstan’, Kazan.

Trouble is, I like old buildings, and particularly quirky old doors and gates. Short of bubble-wrapping them and shipping them back home to New Zealand, I have to make do with photos. But even the most amazing old portals can need that extra ‘zing’ – a person, or at least something alive in the photo.

The outside of Cafe ‘Vegan Day’, Kazan – right on the edge of ‘Old Tartarstan’.

Staff behind the counter at Cafe ‘Vegan Day’, Kazan

I found a gold-mine of these items in the area known as ‘Old Tartarstan’ in the Russian city of Kazan.  Not without sustenance, of course.  Heading out of the center of Kazan, I pulled in at a nice, handy place – the cafe ‘Vegan Day’. It’s on the street (Shigabutdina Mardzhani) heading up alongside Kaban Lake. I had my coffee and cake on one of seats out on the footpath. There are more secluded spots in the courtyard.

From the cafe, I simply headed west – the opposite direction of the lake. There is a fancy, restored, pedestrian street (with a nice art and craft shop) nearby, but the next road over (Kayuma Nasyri), and its various side-streets, was an epicenter of naturally weathered, overgrown, sometimes boarded-up, amazingly unique ‘old stuff’. ‘Old Tartarstan’ is the part of Kazan city where the ethnic Tartars were pushed, after Kazan was invaded by Russia. Large parts of Kazan are being renovated – it’s become a tourist draw-card. But fortunately, some old areas remain untouched.

The most amazing doorway in Old Tartarstan, Kazan. But this picture needs some …. life.

So there I was – standing in front of one of the most incredible old door ways on the planet. It’s totally wonky, with lines diverging everywhere, with the remnants of a pale bluish-green paint job that could go back to the czars. At this point, let me get a plug in. Whoever owns this doorway, don’t ever remove it, restore it, renovate it, or even think of ripping that weed out. OK? Noooooo! Get it on the UNESCO list.

One of the many historic buildings in Old Tartarstan, Kazan.

Too easy to photograph, but that doorway needed some life. So there I was, in Russia, with a camera, trying my best to look nonchalant, and inconspicuous, and waiting for someone to walk into the ‘right’ spot by this gate where I can casually snap them. I mooch around, I wander away, I come back (‘lurking’ describes this well), because with Murphy’s Law, suddenly there’s no more pedestrians.

And it was about here that my attempts to look invisible caught the attention of a local. Nothing sinister, just another friendly person in Russia curious to chat with a foreigner. We had a chat in my limited Russian and he said to call him ‘Rafik’. Whether that was his real name or the deeper (and slightly evasive) meaning of ‘friend’, I have no idea. But he was happy to pose in front of another stunning entrance-way (see the featured image). Down the end of the street, where it hits Ulica Turkestan, is a slightly overgrown little park. It’s pretty much the edge of the old area, but worth an explore.

And then I went back to my prize, and by and by saw a woman come out of a building further up the path, and turn to come my way. Realising my stealth mode had been blown, I waited til she walked past, and snapped when she reached a little patch of light framed by green foliage.

That most amazing doorway in Old Tartarstan, Kazan. A spot of life added.

I think it was worth the lurk – don’t you?