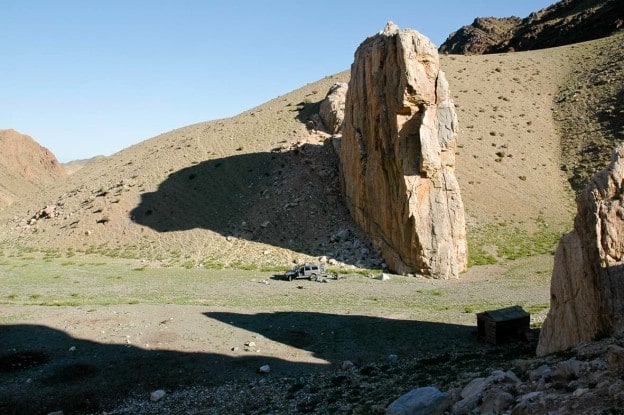 We set up ‘camp’ at the base of Mongolia’s ‘White Doors’ — a gap in a massive outcrop of vertically-tilted limestone. ‘Camp’ was the three of us, our swags (roll-up beds we just placed on the ground and slept under the stars) and our big food box. We ate, and after dark, retreated to our beds. Around midnight an eerie howling broke out high above us – wolves! It was a magical moment with those weird rocks towering above us and those sounds coming out of the darkness.

There’s an awful lot of limestone in Mongolia. When you are in your Landcruiser lurching your way along the rocky tracks of the Gobi Altai you can spot whole mountains of the stuff off on the horizon. White mountains, or near enough to white.

When I first started geological mapping  in the region I was intrigued by the stuff. Partly this was because I was hoping it would be full of fossils. Much later I would come across fossil-rich limestone (sometimes with fossil corals), but where I first worked, the limestone was a bit recrystalised (technically some of it might be marble). This tends to obliterate fossils. The other reason it was intriguing was its great age – it was variously listed on the Soviet/Mongolian geological maps as “Vendian” or “Cambrian” in age. Vendian is latest Precambrian and the Cambrian is immediately after that – the earliest period from which hard, shelly fossils are known (Some might call it the age of trilobites). What I didnt know at the time was that Vendian is mostly not used by western geologists any more – having been superceded by the “Ediacaran”. It turns out that this was the result of a sort of geological coup where Australian geologists managed to get the type section for a roughly similar period of time officially recognised in their own country. But whatever name you want to go by – this time is well before coral reefs, so it got me wondering – what was it that actually formed these really old limestone massifs?

An outcrop of limestone in the Gobi Altai, Mongolia – known as the “White Doors”.

The nearest town to my base was Gobi Altai. At first this could be done in about 45 minutes, straight over the mountain, if the weather was good, or a bit longer around the base. After a camp shift it became a good two hours away. Up behind Gobi Altai town is a limestone massif – and one day I had the chance to get there for a quick look. I picked up a chunk of limestone that, despite some recrystalisation, had nice fossils visible. These were archaeocyathids – the first reef-forming animals (according to Wikipedia). They are only known from the Early Cambrian, and yet diversified into over a hundred families. On the rock surface they can look like rings that are a centimeter or two in diameter. These are cross-sections of the organism, which the Wikipedia entry describes as “nested ice cream cones”. It is thought they are either a type of sponge, or something related to a sponge. In any case, huge accumulations of archaeocyathids might have formed some of those limestone massifs – but only the Cambrian ones.

Could the limestone have been formed by stromatolites? These were the first reef-forming organisms (Yes, I had to read it twice, Wikipedia states archaeocyathids were the first reef-forming animals). Stromatolites were formed by micro-organisms, especially cyanobacteria. They were common in the Precambrian (I’ve seen the limestone they built up in South African Precambrian sequences). Uchio et al. (2004) documented what they called “The oldest mid-oceanic carbonate buildup complex” from Vendian rocks in the Gorny Altai Mountains of Siberia. This location is several hundred km from the Gobi Altai (Yes, more than one Altai = ‘Golden’ mountain) but possibly a broadly similar group of rocks. Uchio et al. (2004) concluded their limestone had originally been no more than 500 m thick, and had accumulated on an undersea volcanic plateau. Preservation was good enough to see stromatolites and remains of other more enigmatic micro-organisms. However, much of the limestone was massive, and much of the thickness may have formed from lime mud, and Uchio et al. (2004) determined it could be considered as an ‘Agglutinated Microbial Reef’ sensu Riding (2002). He wrote that these “consist mainly of microbially trapped particulate sediment”. To me this sounds a bit like stromatolite, but without the lamina that are intrinsic to genuine stromatolites. In any case, the key component to identifying the Gobi Altai limestone as one of these is a direct association with volcanic rock – something which would, in the Mongolian case, have been metamorphosed to greenschist. This might have been the case, but with structural deformation and the fact that our job wasn’t to delve into such details, this wasn’t clear.

But there is yet a third possibility. It is now clear that there were several Precambrian glaciations of huge extent – big enough to warrant the term ‘Snowball Earth‘ (Hoffman & Schrag 2002).  Glacial sediments are typically overlain by 3-30 m of what has been called a “cap carbonate’. One explanation for their formation is that during such an extensive glaciation rocks are covered with ice, so normal weathering processes can’t operate. This means there is no sink for carbon dioxide, which continues to build up in the atmosphere from volcanic eruptions. Eventually the super-greenhouse conditions melt the ice, and the carbon dioxide quickly reacts with the exposed fresh rock  to form carbonate. One of these cap carbonate sequences is known from the Tien Shan Mountains of Xinjiang Province, China. This is not too far (a few hundred km) from the Gobi Altai. The key here is an association with glacial-formed rock such as a tillite. This is probably not possible in the Gobi Altai due to the amount of metamorphism.

These massive late Precambrian-Cambrian limestones are an integral part of Mongolian geology – they are one of the things you see a lot of in the field. They are ripe for some more detailed work to figure their origins.

I never really slept that night, and perhaps the others weren’t either.  Around two in the morning some more lonely howls came out of the mountains. They knew we were there.