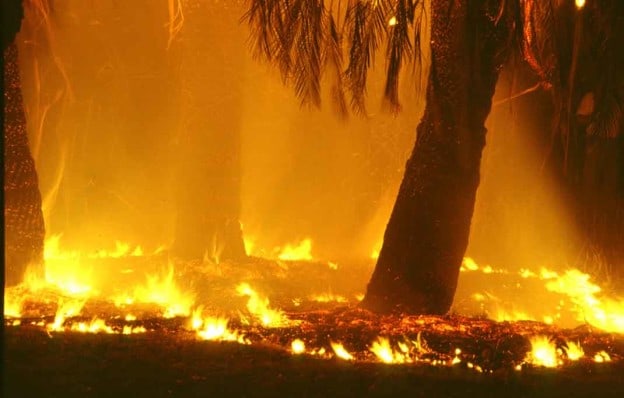 The first time I came to Brisbane in the hot part of the year – I couldn’t believe how anyone could survive there. The nights were oppressively, putridly hot, and full of bitey-insects. Then I ended up living there and suffered for years. I would cocoon myself in a mosquito net, and poke a fan through the gap. Trouble with that was the fan just spun – without being able to draw any air. It was ages before I made the conceptual leap – do away with the mosquito net. A fan will keep both the insects and the heat away.

Actually, Brisbane doesn’t get that hot – it’s cities further to the south, like Melbourne and Sydney, that get the really, really hot days. And the killer-fires. In Brisbane, what makes the difference is the humidity. Why should this be? One might think that the further north one goes, things ought to warm up. in general this is true- but as is often the case, its the extremes that get you. And those extremes happen in the south-east.

It all comes down to the broader distribution of vegetation and a particular weather pattern. The most basic vegetation types – desert shrubland, woodland, forest, relate to overall rainfall (seasonality of rainfall is also important, but I’m keeping things simple). That is the amount of rain that occurs over a year or so. This is relatively high in southern regions, where polar fronts repeatedly pass through, in the north, where monsoonal rain and cyclones occur. The east coast is somewhere in between, as trade winds blow moisture across the land from the sea. The deserts are typically in central regions, away from a source of rain, and at latitudes where the high pressure cells remain for much of the year.

If you keep an eye on the weather maps in late spring/summer, you’ll notice that eventually a low pressure zone (a big L on the map) will appear – generally in the NW of Australia. This is a heat-low. Its a sign that the land is getting really hot. Some days at the height of summer, the whole of Australia can even become one big “L”. When that low starts to appear in the NW, watch for the climate scenario in the following diagram.

A typical ‘fire-flume’ climate scenario. A heat low in the north-west indicates Australia is heating up. A high pressure cell centred off the east coast is directing hot winds across the Eucalyptus forests of the south-eastern corner. Fires have broken out (crowny-things), and a polar front is approaching which will make things worse by creating gale-force winds.

A high pressure cell centres itself just off the east coast. High pressure cells are bodies of descending dry air – and wind in these systems blows counter-clockwise (in the Southern Hemisphere). This means that in the northern sector, the trade winds can pick up moisture over a long traverse of the ocean – and plaster it against the northern Queensland coast. The Great Escarpment/Dividing range stops moisture from going much further inland, and makes the Cairns area and adjacent mountains, very wet.

Central Australian desert – hot, dry, but not much vegetation to carry a fire.

Eucalyptus forest in the hills above Melbourne. It’s over-all wet (spot the tree-ferns), but on a hot, dry day, extremely flammable.

Now consider the western sector of the High. Dry air descends here over a desert. Its not hot enough here to form a heat low – but it’s still damned hot, and there is no sea or lake for the air to pick up moisture. The air can travel across the desert getting hotter and hotter, but there isn’t much to burn there. But them it reaches the SE corner of Australia. It’s in this overall moist area that Australia’s really big forests of Eucalyptus grow.  So you have stinking hot, dry winds blowing out of the hot centre – almost directly onto highly flammable Eucalyptus forest. When this scenario happens, it’s only a matter of time before a fire breaks out. But another factor added to the mix, can make things far worse. A polar front moving into the area from the west, can turn a hot wind into a howling gale. This is when things get deadly. The danger area, roughly defined by Adelaide, Melbourne, Sydney and Hobart, is what Pyne (1998) has called the “Fire Flume”. The Eucalyptus burns – and stimulates more Eucalyptus to continue the cycle..

And Brisbane? It’s in a sort of betwixt and between location.  The amount and seasonality of rainfall there means that dense, tall Eucalyptus forest will not grow. So Brisbane is out of the ‘fire flume’. Being nearer the centre of the high pressure cell, it gets hold, but only gets sluggish winds. Unless an electrical storm forms along the Main Divide and then barrels across the lowlands to the coast, with enough rain to cool the place down for a day or two – it just stays hot and putrid