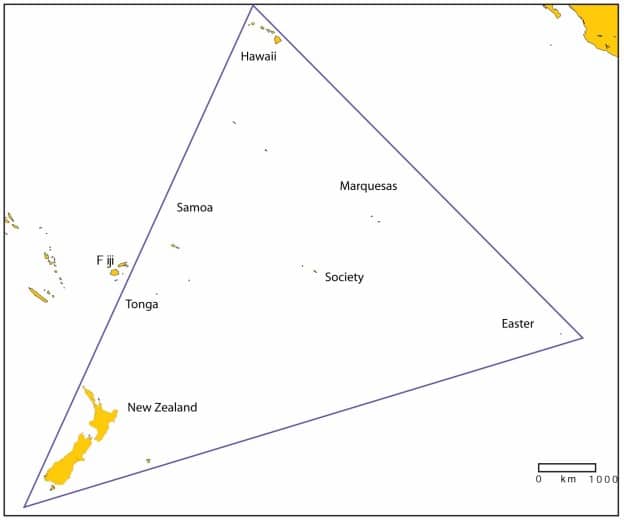 New Zealand school kids, at least when I was one, were taught to draw the Polynesian triangle. It has Hawaii at the top corner, Easter Island at another, and New Zealand at the third. Within this triangle, so we were told, are Polynesian cultures. Outside of it you have, for example, Micronesian and Melanesian. Within Polynesia, languages are mutually intelligible to a high degree. When the ancestors of the Maori came to New Zealand about 800 years ago, they bought a version of Polynesian language with them, and applied words to familiar entities, or perhaps to the next best things. One of the funniest results was surely when the first New Zealanders uttered their equivalent of “Bloody Hell!” followed by something like “Now THAT’s a moa!”, thus applying the Polynesian word for the common chicken to the now extinct flightless birds that could reach to around 2 m in height.

Over the years I’ve kept an eye out on research addressing where the Polynesians themselves came from. It seems clear from both linguistic and DNA evidence that they may have originated in Taiwan, then skirted the Melanesian islands (probably picking up some DNA along the way) before expanding into the Pacific. But somehow this all seemed a bit far in past to me – I had grown up with the hard lines of that Polynesian triangle. They had become a sort of mental barrier.

But then in Indonesia I learned that common words of Bhasa are almost identical to Maori. The word for five is ‘lima’ in Bhasa and ‘rima’ in Maori. Water is ‘air’ (pronouced ay-er) in Bahasa and ‘wai’ in Maori. This was a revelation to me – Indonesia is a long way out of the Polynesian triangle. Chatting with tribal people from Aceh in Sumatra to the mountains of northern Philippines all resulted in words that sounded quite familiar. One of the words for ‘bird’ around Aceh is ‘manok’, in New Zealand it’s ‘manu’. None of this will be new to linguists of course. There were some other, harder to pin down things. Driving past Indonesian villages where the women would be sitting I the verandas off their houses spotting the ‘bule’ (pronounced “boo-lay” = foreigner) looked reminded me of the old Burton Brothers photos of Maori in the 19th century. The only thing missing in their portraits of Maori women posing in the verandas of their whares (huts) would be the mobile phones. ‘Polynesia’ started to feel a lot more like a part of east Asia than something defined by a triangle.

Taiwan, where the genetic evidence points, lies just off the coast of mainland Asia – tantalisingly close. How far can we take Polynesian origins? China anyone? I guess work is already under way to more precisely narrow down genetic origins in Asia.

Linguistically I know there are a lot of problems trying to trace words back into deep time, and the science is replete with amateurs popping up with their discoveries, but here’s my five cents worth … Last week I had an odd experience. I had to give a short talk in China – introducing myself and New Zealand. I got to the point where I said New Zealand has two official languages – English and Maori. Our passports are in both languages and in many public institutions, so are the signs. I pointed out there are also now a lot of Maori words that one can hear on English TV in New Zealand. These words would be opaque to a visitor, but no kiwi would bat an eye. They have been incorporated into Pakeha (non-Maori New Zealand) English. Words like ‘whanau’ = ‘family’, ‘iwi’ = ‘tribe’ and ‘hui’ = ‘meeting’. At this point my Chinese hosts looked astonished – then burst out laughing. “But ‘hui’ is what we are having now – ‘hui’ is ‘meeting’ in Chinese!”