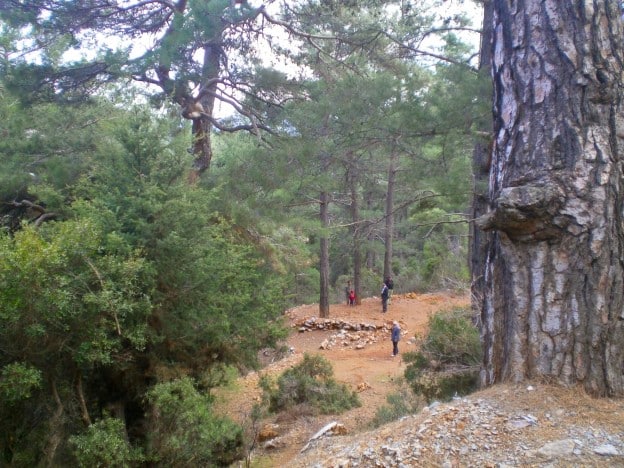 On March 21, 2011  I was sent to do a job in the far south-east of Turkey.  Me and Erol, my indispensable helper, met the local contact, dined, and were then driven far into the hills. I only had the fuzziest of notions where I was going – as no-one spoke a word of English and my Turkish was survival level only. We eventualy arrived at a Turkish military checkpoint and were duly let through. From there we were in what is basically the military zone along the Turkish-Syrian border. We drove south through the Nur Mountains and into an odd little corner of the Turkish outline. It’s a narrow, southward projection that encloses one side of the Gulf of Iskenderum – an inlet of the Mediterranean Sea.

We drove within a couple of km of the Syrian border – in a Kurdish-controlled area, then kept that on our left, 10-15 km off, before swinging back towards the west.  In a clearing surrounded by pine forest, we stopped. I was there to look at some old pits where chromite – the ore of chromium, had been dug up. Our guide showed us a couple of small pits by the vehicle, then I set off by myself to spend the day looking for more. I had my GPS to tell me where the boundaries of the exploration leases were – and it told me I was about 30-35 km from the Syrian border. In places where there was a view, I looked off to the east, and figured that was what I was looking at off in the haze. The Gulf was only nine km in the other direction.

The view to the east, through the Nur Mountains. Syria in the haze on the far side.

For a geologist it was idyllic. Mongolia is vast and open, and it can feel like there are no secrets. It’s sun is harsh on a red-head. Indonesia is covered in rain-forest (or what’s left of it), great for botany, not so good for geology. But here I was walking through open pine forests. Not too thick that I couldn’t see rocks exposed, or the old pits, where someone had already dug up the easy-stuff. It wasn’t too hot or too cold, it wasn’t raining or blowing. Except for a couple of goatherds that wandered past, there were no other people. The scale of the landscape was just right. It was fine-grained enough that I could walk over ridges, amble around spurs, excited about what might be just around the corner. It felt like I was exploring an abandoned castle.

An old chromite pit in the pine forest. See also the featured image.

In terms of the World Wildlife Fund Ecosystems, what I was in was ‘Southern Anatolian montane conifer and deciduous forests’  (Eco-Code PA1220). Geologically it was a sliver of rock thrust up from deep below the ocean floor – a little bit of the Earth’s mantle. This is where chromite typically comes from. The chromite was in layers, as distinct from ‘pods’. This meant that there was some continuity and coherency to it – and that, knowing the topography and how the beds dipped, a basic geological approach could work out how it was structured (Contrast that with ‘pod’ chromite, where it could run-out without warning. Dicey stuff to try and mine). It was a place that I thought had geological potential. With a bit of knowledge as to how the deposit was structured, it could be economic to go beyond the mere scratching that had happened so-far. Damn only having a day there! But I recommended another visit and looked forward to getting back and the chance to do it properly.

I don’t speak/read Turkish. No idea what this means. (:

Unfortunately that will never happen. Just over a week before, there were large protests in Damascus. Events took an ugly turn, and eventually spiraled into the Hell that has enveloped Syria now. The area that I was in is probably a rather unsavoury place now. A recent map shows the area on the Syrian side of the border to be occupied by the Jabhat al Nusra group (Apparently ‘moderate’ rebels who decapitate humanely). Other rebel groups and Kurds also occupy territory nearby. The map is hardly likely to be very accurate, and these ‘territories’ will not end at an arbitrary line on the map.

Our route (red line) superimposed on a current map of who-is-where in Syria (https://upload.wikimedia.org/wikipedia/commons/8/88/Syrian_civil_war.png). Turkey is light grey, the other coloured regions are Syria. Red is Government-controlled, yellow is Kurdish, dark grey with the requisite black spots is Daesh/ISIS, and green is for other rebels.

It could be worse. Daesh/ISIS-controlled territory is 55 km from where we turned south along the mountains. It’s the southern edge of the conduit where men (and the odd woman) and materiel flow from Turkey into Syria, and oil on the way back. The Russian base at Latakia is 120 km to the south, currently concentrating some of its efforts on targets about 80 km from where I was. But those idyllic pine forests will be crawling with everyone from ISIS wanna-bes going one-way to civilians fleeing the mess in the other. It’s going to be a long, long time, before someone like me has the freedom to wander there again, and do geology.