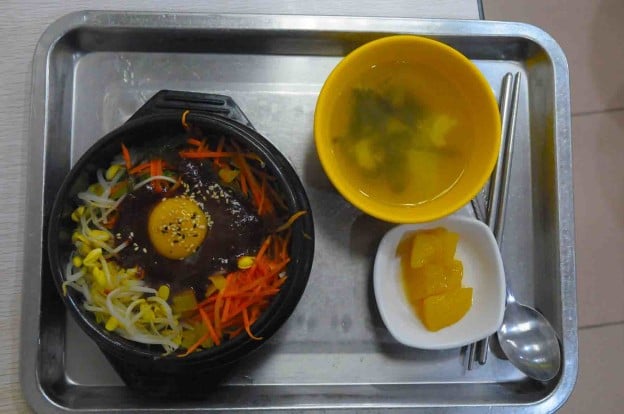 The first of a series showing where I eat in Nanjing. May be useful to other ex pats or travelers here.

‘Stone Pot Place’ from the outside.

I go to this place about once a week for a stone-pot meal. I think the name of the place translates as ‘Stone Pot Place’. It’s on Sipailou, directly opposite the pedestrian crossing at the south entrance of Southeastern University. For 18 RMB (c. $4.50) you get a hot stone pot with an egg ready to be stirred into a mixture of rice and veggies. This is Bibimbap, traditional Korean food (thanks Jinyoung!) – see the featured image. There’s also a bowl of soup, and three bits of something vaguely fruit-like. I toss them in the mix,  though it’s disconcerting that all the locals leave them in the bowl. I haven’t notice that you’re supposed to rub them behind your ears or something. (update, I’m told these are pine-nuts. Yummy things!)

Part of the menu. The bits circumscribed in red means it comes with rice. My stone-pot favourite is the illustrated dish.

A little story from here. As usual, I generally just point at a photograph and proffer cash. This worked many times here, with a person I took to be the owner. One day it was someone else – and they asked a question. No idea what they were asking, and after a series of back and forwards between them asking something in Chinese, and me just pointing at the photo, cash in hand, this was going to be a game-changer. if I didn’t answer the question, I wouldn’t get my meal. I was about to give up when the person behind the counter enlisted a student to come and translate. What I was being asked was: “Do you want it spicy?”  (: