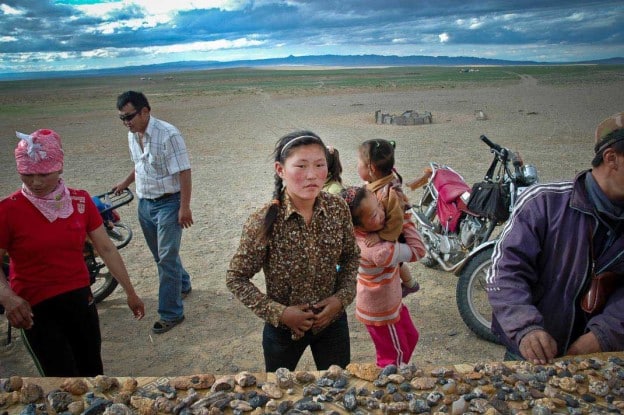 “I’ll have to show these to my colleague”. The security guard at Brisbane’s International Airport took the two objects from my bum-bag and walked off.

A few weeks before I had been travelling south through Mongolia’s  South Gobi region. It’s basically a gravelly, rolling desert. In the middle of all this wide-open country, one of my colleagues said we were about to visit a shop. A shop?  There didn’t seem to be much of anything out here.  And then – a row of rough tables, lined up along the dirt track, with no-one in sight. We pulled up in our Land Cruiser and got out to have a look. The tables were covered in all manner of collectibles – fossils, minerals, that sort of thing. In a few minutes, people materialised. They seemed to simply appear from no-where: men, women, kids. Some came on motor-bikes, others seemed to have walked. Pretty happy people too, having someone to stop and look at their rather lonely desert shop. What grabbed my attention were a couple of little greenish objects, about 20 mm or an inch long, and with three sides. They were old bronze arrow-heads. I bought them, dropped them in my bum-bag, and when the others had done their business, we kept heading south.

Finally, late afternoon – the dunes. We pulled up for a pee – and this is so often the case – you drive for hours over rough roads, but when you pull up on some sand, you get a puncture. With a long hiss, one of the tires went flat. But there was a routine procedure – driver gets up on roof to unfasten spare, passes it down to two of us standing below. Except this time I fumbled and the thing caught me just above the eye. Result, split forehead and blood trickling down my face. Great view though.

But I digress. We did our work, days later headed back to Ulaan Baatar, and I headed out of the country for a break. Back to the Southern Hemisphere. After a couple of weeks, back to the airport to come north again. X-ray machine, back-pack through, bum-bag off and into X-ray.  Security guard – big, obviously ex-military type – asks to look inside the bum-bag. Finds arrow-heads. I had forgotten all about them, and now, about to board an aircraft, I was about to lose them. Stupid, stupid….

I could see the guard with a group of others in the distance, all looking at them closely. By and by he came back, and put them down on the bench in front of me.