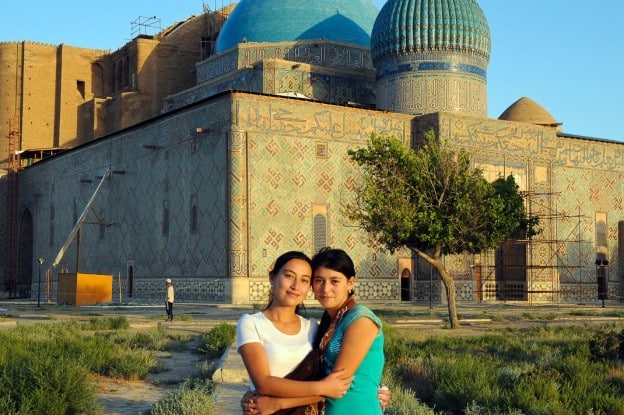 I’m not at all sure I remembered when all those ‘stans’ appeared on my radar. Did I know about them before the Soviet Union fell apart, or did they just appear in the news so gradually it seemed like they were always there? There’s Uzbekistan, Kirghistan, Afghanistan (yes, I did know about that one) – the ‘-stan’ bit  makes sense when you think of the English word “stand”. These countries are where their people, the Uzbeks, the Kirghiz, the Afghans, ‘stand’.  The ‘-an’ part of it is even more widespread. There’s Iran, and inside Iran there are the cities of Tehran, and Isfahan. This ‘an’ sound is probably also about ‘place’. The word ‘han’ or ‘khan’ can have the meeting of an ‘inn’, where one hopes visitors did not stand, but got to lie down for the night.

Turkistan is a city in Kazakhstan. It’s a city and always confused me – Turkestan was a state (the ‘place of the Turks’), or perhaps I was thinking of Tukmenistan, which is a modern-day country. The jewel of Turkistan is the Mausoleum of Khwaja Ahmad Yasavi. This amazing building celebrates a man who was a poet, and died here in 1166. He was still so famous more than 200 years later, that Tamerlane, the Mongol ruler, ordered that this building be made over whatever was marking Khwaja Ahmad Yasavi’s grave. Unfortunately tamerlane died in 1405 – and construction promptly stopped. You can still see bit of wood sticking out of the half-finished facades from that time.

Pieces of wood dating back to 1405 still project from the walls when construction stopped.

The place is a mass of turquoise-blue enameled tiles. And while it already looks amazing from a distance – it’s almost fractal, as the details keep there the closer you look.

The site is regarded by some Muslims as worthy of pilgrimage. Though there is nothing ‘official’ about this – it’s just nice that people regard tombs of poets as worthy of travelling to. It;s much easier to do nowadays – just an overnight train ride from Almaty.

Close up details of enamel work.