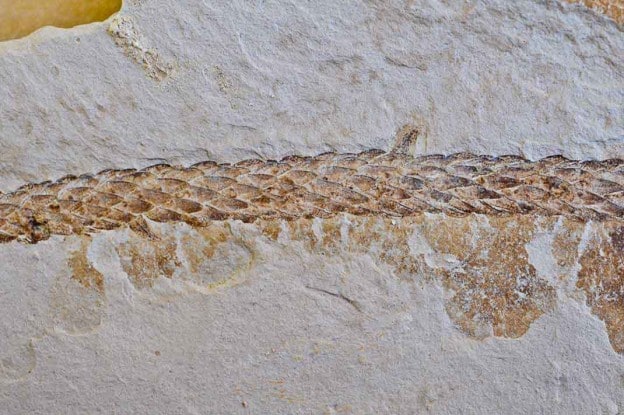 In a little patch of shale, continually flaking onto the road near Bannockburn (central South Island, New Zealand), there are the unmistakable fossils like Australian ‘hoop pine’ shoots. Hoop pines are members of the tree family which includes ‘monkey puzzles’, ‘bunyas’ and the ‘Norfolk Island Pines’. The Latin name is Araucaria – New Zealand has none of these in its native flora today, but it does have the kauri (it’s another genus, Agathis, but in the same family).

Around 17 million years ago (Miocene period) the shale would have been accumulating in a standing body of water, probably a flood-basin lake (The Manuherikia Group). Plant fossils would have been washed into it after they blew off a tree into a river, which then flowed into the body of water. The pine shoots are made of long, overlapping scale-like leaves, that together make a tail-like structure, maybe 4-6 mm in diameter. Along with the shoots there are also occasional  seed cone-scales and rare pollen cones. The cone-scales have delicate wings, just like modern hoop-pines, but these have often been lost in the fossil.  These additional plant fossils all help to show that the original tree was something much closer to the Australian ‘hoop pines’, the Norfolk Island pine’ and some New Caledonian species of Araucaria, than to other species in the family.

A fragment of a branch of fossil Araucaria shoots from the Miocene of Bannockburn, New Zealand

Back in the days of the dinosaurs (Cretaceous, c. 75 million years ago) the hoop pine family was common in New Zealand. They were an important component of the wet coal-swamps. But at the same time the dinosaurs vanished, so did those trees. From that time on, fossils of Araucaria are rare in New Zealand, with the layer of shale near Bannockburn an exception.

What do these fossils mean? Probably warmer times than today, but perhaps more intriguingly, the Australian hoop pine is a key plant in what are called ‘dry rainforests’. This term sounds a bit contradictory, but it refers to forest where rainfall is relatively low, but where fire does not normally occur. Unlike wetter, more normal rainforests, the low rainfall helps keep the forest canopy more open. Without so much shade, the greater amount of light reaching the forest floor is probably a reason why the hoop pines live in them. It’s certainly a very different habitat than the coal swamps where their relatives lived in along side dinosaurs.

The Bannockburn fossil ‘hoop pines’ (using the term broadly to refer to a group pf species) are evidence of forest (the area was virtually treeless when Europeans arrived in the 19th century),  warmer conditions than in southern New Zealand today (and more like southeastern Queensland), but with some sort of degree of ‘dryness’ – probably seasonally low rainfall.

Small-stuff, but it’s bits of evidence like this that climatologists can use to figure out exactly how our climate system changes.

Liked this? Try this next: New Zealand: The Jurassic fossil forest at Curio Bay

Pole, M.S., 1993. Early Miocene flora of the Manuherikia Group, New Zealand. 10. Paleoecology and stratigraphy. Journal of the Royal Society of New Zealand 23, 393-426. (proposes the dry rainforest interpretation for the shale at Bannockburn)

Pole, M., 2008. The record of Araucariaceae macrofossils in New Zealand. Alcheringa 32, 405–426. (describes cuticle from the Araucaria fossils at Bannockburn)

Pole, M. 2014. The Miocene climate in New Zealand: Estimates from paleobotanical data.
Palaeontologia Electronica 17, Issue2;27A; 79p;palaeo-electronica.org/content/2014/780-miocene-climate-of-new-zealand (detailed evaluation of New Zealand’s climate at the time of the Bannockburn shale and its Araucaria fossils)

Webb, L.J., 1959. A physiognomic classification of Australian rainforests. Journal of Ecology 47, 551-570. (defines ‘dry rainforest’ in Australia and Araucaria as one of their keys)