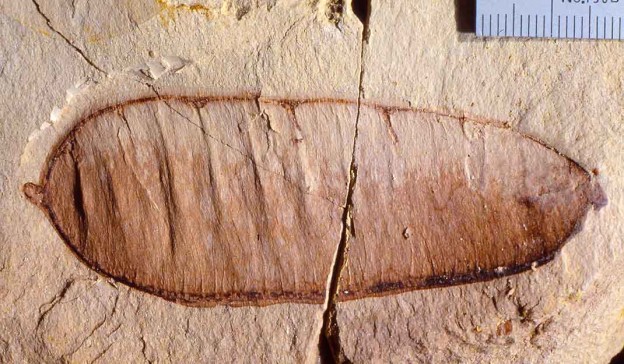 Pea pod fossils in New Zealand were first found by Aline Holden, a pioneer of New Zealand plant fossil research. She found the first ones at Bannockburn in 1981, while working on her PhD, and then found more in the Nevis Valley.

In 1987, my PhD professor, J.D. Campbell and his wife, Anne, dropped in unexpectedly in Alexandra (my home). They were on their way to the Nevis Valley and wanted to know if I would come too. The Nevis Valley has a well-known oil shale deposit, and this includes fossil leaves and scattered fish bones of Miocene age (c. 18-17 million years). Once in the area, ‘JDC’ focussed on shale near the track, while I set off to explore up a shrubby side valley. I was on the way back when I spotted a likely outcrop up on the valley side. It was solid gold – to a fossil plant person that it is. Technically it was mudstone, but stuffed full of not only fossil leaves, but pea pods as well. I worked out as large a chunk as I could, strapped it to my pack frame, and then staggered back to the car with it.

Back in the lab, chipping away the overlying mudstone, revealed fossil pods (legumes) up to 130 mm long, and with 14 peas (seeds).

Today New Zealand has just four groups of peas (the legume family). There’s kowhai (Sophora), Kakabeak (Clianthus), the scree pea (Montigena) and the many brooms (Carmichaelia). All of these are part of the legume family that have classic ‘pea flowers’. One of the technical terms for this group is (or was) the Papilionoideae (think of the French word for butterfly – ‘papillion’).

But traditionally, there are also two other large groups of legumes. One is the Caesalpinioideae – with quite showy flowers (think Bauhinia), then the Mimosoideae. These have very reduced flowers, looking a bit like pom-poms (think of the wattles/Acacia).

The lucky find in the Nevis that day was not just the large fossil pea pods, some with the seeds (peas) in them, but some scattered leaves that were surely produced by the same plant. Based on the combination of evidence, the legume expert Dr Les Pedley, suggested most likely identification of the fossils was Serianthes. This plant is now found in New Caledonia, Fiji, and French Polynesia.

Fossil legume leaflet from the Miocene of Bannockburn, New Zealand

Serianthes is one of the Mimosoideae group. The Mimosoideae was already known in New Zealand based on fossil pollen, although in those cases, Acacia was considered the more likely parent plant (Pocknall and Mildenahll 1984; Mildenhall and Pocknall 1989).

Together, the pods, leaves and pollen make a nice addition to what used to grow in New Zealand. But what do these fossil mean? Based on where Serianthes grows today, the average annual temperature may have been more than 20 C. That’s about twice what it is now. Also a suspicion that the vegetation it was growing in was relatively dry.

I seem to spend half my life staggering kilometres with a pile of rock, either on my back or worse, carrying it in my arms. But in this case, it was well worth it.

Links will take you to my academia.edu site where you can download a pdf.