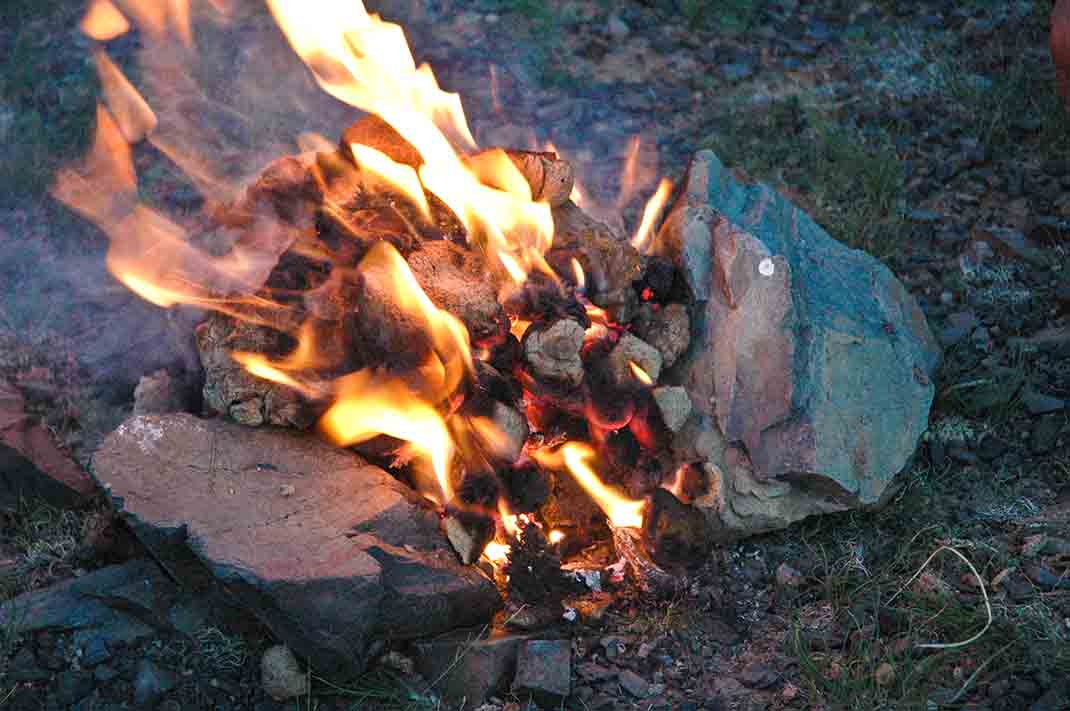 I once had a student come to me for help looking at sheep crap. It took the mystery out of what this stuff actually is. Under the microscope it’s quite a treasure-trove of little bits of plant leaf. From the various patterns you can tell what plants the sheep had been eating. The crap was some of the oldest in Queensland, so the interest wasn’t purely scatological.

Fast-forward to Mongolia. I was checking out some rocks in a valley among the foot hills of the Gobi Altai. There were three of us – me, a driver and a cook.  As the day drew to a close, I commented that what I miss is evenings around a camp-fire. The Altai is mostly arid. Along with all its rocks, any plants are often not even ankle-high. Our cooking was all done with gas. Nothing too romantic. And after dark you simply went to bed and looked up at the stars.

But our driver knew a thing or two. He directed us down to the dry creek bed. Look carefully down there, he said, and you’ll find what’s left of some shrubs that were torn up in a flood. They have a dense, woody root-system. Whack the sand out on the rocks – and we’ll have a fire! We did, my first in Mongolia.

Our camp site for the first night on this trip to the Mongolian Gobi Altai. My cook sits at our dinner table. The dry creek bed is off to the right, my swag is in the foreground, and the only vegetation in sight is a very low green herb.

Next day we moved to a more open area. No dry creek bed there. Most of the plants in the Mongolian semi-desert, or steppe,  are not grass, but herbs. And strongly-smelling ones at that. We were surrounded by miles and miles of this stuff, just a few centimeters high.  I made a comment like “Well, no camp-fire tonight!” But our driver still had a trick up his sleeve.

He sent us on a mission to collect dried crap.

The three of us spent a good half hour combing the surrounding area for all we could find. Back at camp we made a little pile. There were three kinds of crap. Camel, possibly cow, and one other (perhaps someone can enlighten me, I’ve forgotten what it was….). Each of these, had we looked at it under a microscope, would have been sliced up plant leaf and stem. Unlike the grass that those Australian sheep had been eating, this crap would have had something extra – the oil cells that gave the herbs, and the crap, their strong aroma, would have been all through it.

The three kinds of crap we collected.

Damn it if each piece of that crap wasn’t a natural little fire-starter.

A fire is built up from dried crap around three fist-sized rocks (and kept in place with some bigger ones).

But there was a third trick up the driver’s sleeve – the pile of crap was built up over three first-sized rocks. The resulting fire burnt well. Meanwhile, he put some water and tea bags into our tea pot. As the fire matured, these rocks glowed red-hot. At the right moment he used our soup-ladle, quickly fished the rocks out of the fire, and dropped them into our tea pot.

Instant boiling, instant cups of tea, and with a slight herbal aroma….