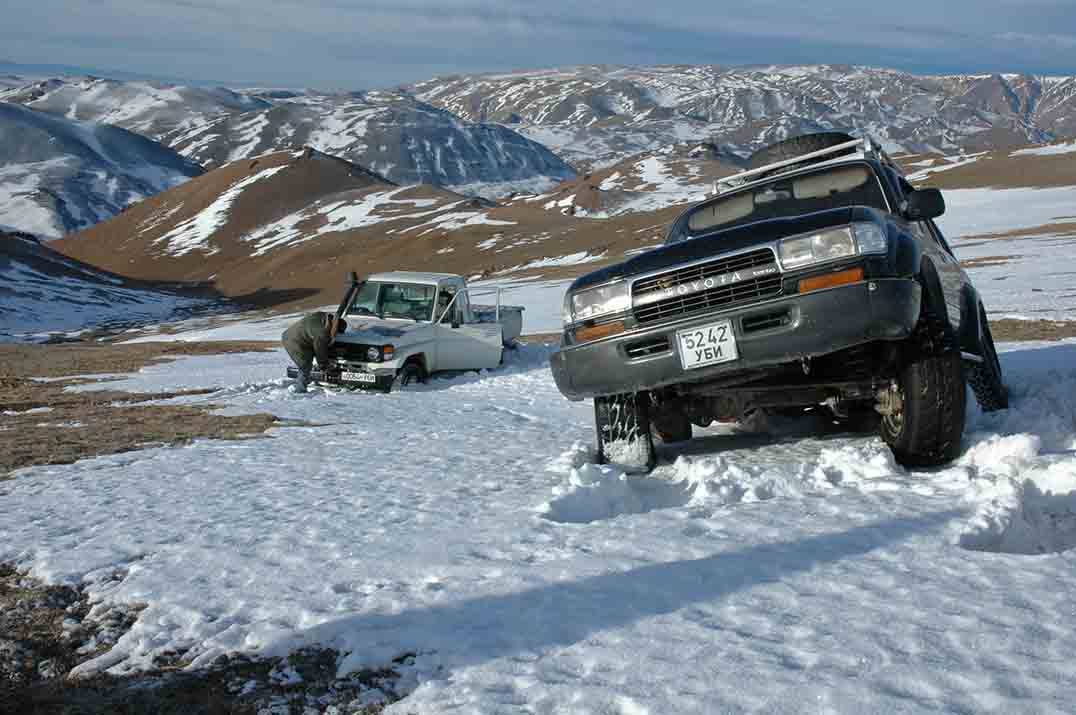 In five years or so  in and out of Mongolia, I’ve criss-crossed thousands of kilometres by 4WD Landcruiser. But I’ve only taken the wheel once, and that was for a short hop back to a village when my driver wasn’t well.

Let me explain. Technically, anyone can take the wheels of a 4WD and go through the motions – and say “Hey – I’m 4WDriving in Mongolia”. It’s when things go wrong that count. Mongolia is a big, big, largely empty country. And when things go wrong, you’re pretty much on your own, and quite possibly with some severe weather coming your way. Quite aside from everyone having their job, driving is about responsibility. Just like “you break it, you own it”, being a real driver means that if things go wrong on your watch – its up to you to get out. I simply knew that getting behind the wheel in Mongolia, I could’t fulfill that condition.

Our fully-laden Russian Jeep, about to make a routine crossing of a river. But rivers always change – will this time be like the last?

Take getting a puncture. You can change a wheel? Cool. We normally travel with two spares on the roof. As soon as one goes down, we think about where the nearest town/village is that can replace it. And punctures happen in the damnedest of places. You can spend hours negotiating bare rock in the mountains, and finally find yourself on a smooth, sandy track on a plain. Get out to have a pee, and that ‘pssssss’ sound is not you or one of your mates, but the bloody tire. Time and time again. But on one trip we had six punctures. Do the maths – real drivers can patch a Landcruiser tube on the fly.

Travelling in Mongolia – and another flat.

Then there was the morning I was out in the desert, with just my driver. I set off on foot to do some geology, and sauntered back mid-morning for a coffee. I got around the other side of the Landcruiser, and there was the entire wheel/hub assembly in pieces out in the sand. “Little problem” said my driver. There was a problem he had recognised, not fatal, but he didn’t blanch from putting his head down to deal with it. In Mongolia, real drivers are self-reliant mechanics.

In Mongolia you rely on your drivers for everything. They get you there. Outside of the cities there are just a couple of sealed roads. Beyond that it can be anything from graded track, to wheel ruts, or nothing. The driver typically navigates by dead-reckoning (not always without the odd embarrassing cock-up), either by being used to the general route, or perhaps because he came this way once five years ago. Real drivers seem too have an amazing map inside their heads.

In Mongolia, travel across the wide valleys is often tricky. You can be bogged in a flash, and unlike anywhere else , tall grass can hide the danger.

Partly it’s knowing the landscape. After a while you can look into the Mongolian countryside and predict where the tracks are going to be. Typically the centers of the plains are avoided. This is where the finest mud accumulates during floods, and it’s where you risk sinking. The huge gravel fans have dozens of deep channels in them. You either want to be well above them, right up in them, or be in that narrow zone between where they hit the plain, an the mud. But sometimes you have no warning and stuff happens. In Mongolia its always a great idea to travel in a pair of vehicles. One can help the other one out. Real drivers know when to toss the ego and work as a team.

In Mongolia, sometimes your only hope is another vehicle. Bogged to the floorboards, nothing to tie your winch to, screwed without some help.

A real driver can read the signs. A pair of wheel ruts going into a mountain gorge is a good sign you can get through. If its’s only a single rut – a motorbike trail, it’s a good assumption you can’t do it, because no one else has.

Two wheel ruts go into this Mongolian gorge – so there is a good chance we can get all the way through.

But hey, you can always be the first! A good, confident driver, will give it a go – or tell you if it’s a stupid idea.

In Mongolia single wheel ruts are made by motorbikes, and typically mean bad news for a 4WD. But no-one says you can’t try!

Winters are just too harsh to work in Mongolia – but spring can be a difficult time too. There are still deep, soft snow-drifts here and there and sometimes you just have to try and cross them. And frozen rivers that were perfectly safe to cross a week ago – are they safe now. These are decisions real drivers have to make. If they get stuck – it’s their responsibility to get out.

Mongolia – stuck in a snow drift.

Mongolia – spring, when that frozen river starts to thaw…

And real drivers too, are about personality. You constantly come across ‘incidents’in Mongolia  – a car crash, a truck off the road, a family vehicle stuck in a river, or, as on several occasions, a family sitting in a lone vehicle in the middle of no-where, out of petrol – and out of water. A good-natured driver will take any of this in his stride, stop, and do what he can to help. We’ve quickly  pulled several vehicles out of trouble. We never gave away petrol, but checked on the occupants of stranded cars and gave water if needed. Once we operated as the ‘Delgerengui Schoolbus’. My driver explained that the kids from the local nomad families spend the week at school, only coming home for the weekends. We picked them up and drove them to school one Sunday.

Mongolia – the ‘Delgerengui Schoolbus’. The back seat of our Landcruiser taking a bunch of kids, and some parents, to school.

Drivers often double as cooks – something I just can’t do. At least when it comes to whipping up something nice in the middle of no-where. They might even know how to boil water using crap. And of course, real drivers are good company – you are with them for long, long trips.

In Mongolia, real drivers can teach you tricks about surviving in the desert…

So you see, in Mongolia, anyone can drive, but it takes pretty special sorts to be real drivers….

Update: If you are interested in driving in Mongolia yourself, check out this blog post from www.overlandsite.com: