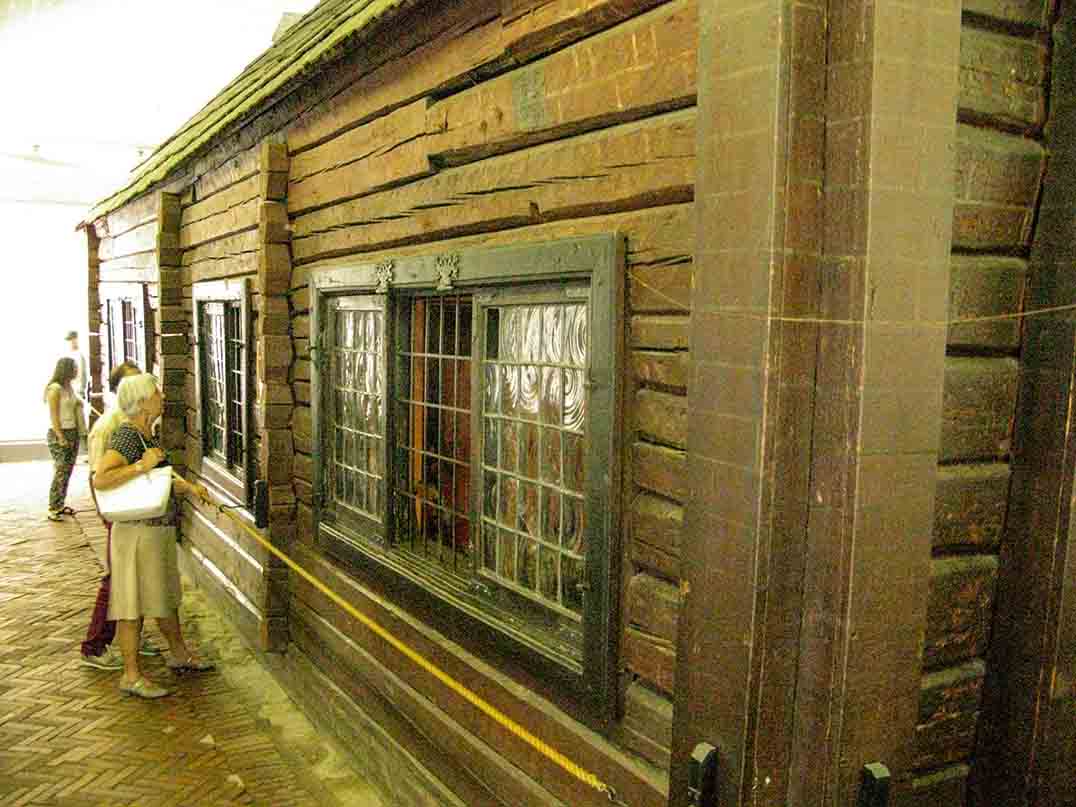 The most famous ‘little log cabin in the woods’ is probably the one in which Abraham Lincoln grew up in Kentucky. It was built in 1808, but unfortunately, no longer exists.  However, in St Petersburg, Russia, there is to this day, a log cabin built in 1703. It was the home for a few years of Tsar Peter the Great – the man who founded St Petersburg.

Peter the Great’s original log cabin, virtually the first building of the city, on display to the public, in St Petersburg.

At the time, the area was mostly still one vast swamp or bog, although a map from 1698 (when the place belonged to Sweden) shows scattered houses and what appear to be ploughed fields.

A map of the St Petersburg area in 1698 (above) showing green forests and swamps and a few buildings and apparent ploughed fields. Below I have superimposed a Google Earth image of St Petersburg as it is today. A red arrow indicates the location of Peter the Great’s log cabin.

Peter decided he wanted a new capital (he wasn’t a fan of Moscow) and one that had good access to the sea. He chose this spot on the River Neva, and despite all the trees and very high water table, said something like “делай!” (Do it!). And St Petersburg was built. In the meantime, he lived in his little log cabin, presumably built from trees growing on-site.

The end of one of the logs making up Peter the Great’s log cabin in St Petersburg. The narrow growth rings indicate the short growing season in this region of very harsh winters.

The log cabin remained – Peter was proud of his frugal ways (other than building cities) and to preserve it, it was encased inside a small brick building in 1723. This is open to the public as a museum.

View from the south bank of the Neva across to where Peter the Great’s original log cabin is now behind some trees (red arrow).

I’m fascinated by old images and trying to line them up with the present-day view. The Cabin museum displays a couple of old views of the building, one from 1805 and another of about the same age. These confused me, as they show a building much closer to the river than the present day. There is also a model reconstructing what I take to be the cabin and its immediate surrounds as they were in 1706. Neither buildings in the model match what is now inside the brick enclosure, but they still seem to be close to the river. During my visit, I looked at the two images and the model, and I wondered if the cabin once lay a little bit to the west. closer to the Peter and Paul fortress. This has a little bridge over to the island, which might be what is shown in the model.

1805 image of the brick building built in 1723 enclosing Peter the Greats cabin. Note the river very nearby to the left. Source: Photographed in the Peter the Great Cabin Museum, St Petersburg

A further image of the brick enclosure around Peter the Greats cabin. Probably around 1805. Note the nearby river. Source: Photographed in the Peter the Great Cabin Museum, St Petersburg.

That the cabin had been moved at all was something I don’t think was pointed out in the museum. At least in English. However, I later read in Wikipedia that the cabin was relocated to its present site “in 1711 from its original site on the north bank of the River Neva close to the present Winter Palace“. This is a little confusing, as that would surely be the south bank. Perhaps that is just a typo, but it doesn’t help with the image from 1805 looking closer to the river.

A map from 1705  does show some buildings near the Fontanka River meets the southern edge of the Neva, and a bridge. Perhaps this is the original location of the cabin? If anyone knows, do tell.

Update 29.05.20 – and someone has! A reader wrote to me that “this cabin was originally on the current site of the Summer Palace, basically at the juncture of the Neva River and the Fontanka River, on the opposite bank of the Neva River. The cabin was moved in 1711 to its present location so Peter could build the Summer Palace on the log cabin’s previous site.” Many thanks to them (who would rather remain anonymous).

A 1705 map of St Petersburg. Was Peter the Greats log cabin once at the location shown by the red arrow? Its present location is shown by the blue arrow. Update 29.05.20: Yes, this does seem to have been the original location of the cabin.

Whatever. The original little cabin in the swampforest, basically the first building of St Petersburg. It’s still there….