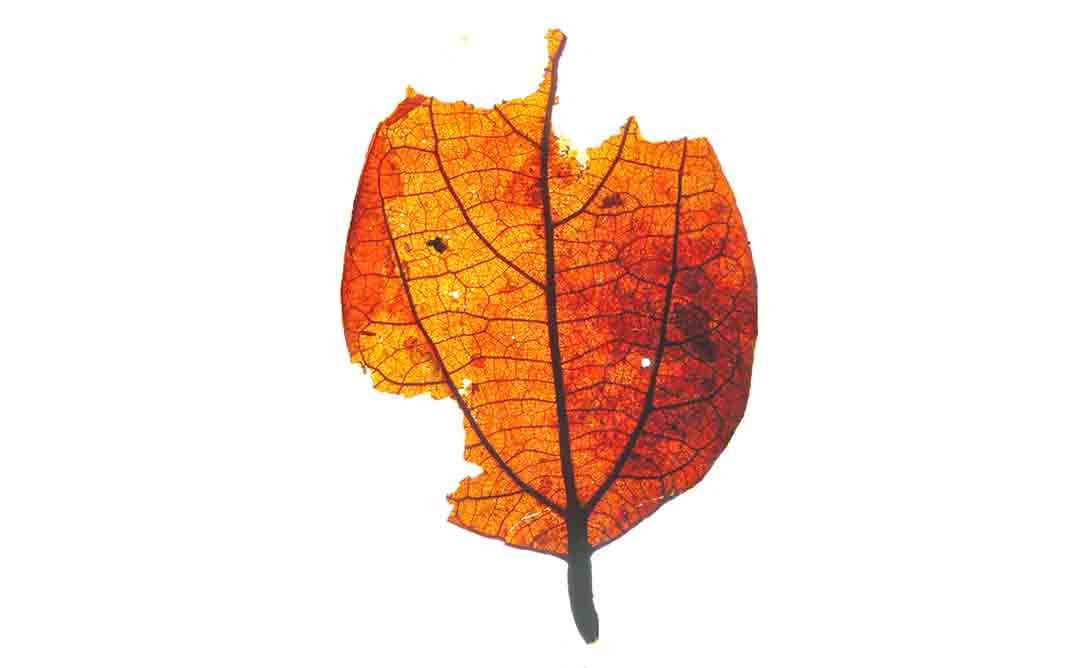 I was crouched in a long boat somewhere up a rainforest-swathed river in Kalimatan, Borneo, when I saw it – a ‘living’ example of a fossil leaf pack I had once seen in New Zealand.

Our long boat is pulled up on the bank of a rainforested stream deep in Kalimantan (Indonesian Borneo) while others pass by.

Several years before, I had been exploring down a little stream near St Bathans, New Zealand. I was looking for leaf fossils in sediments of an ancient river. The geological unit is a faulted mix of the St Bathans and Fiddlers Members (Douglas 1986) of the Manuherikia Group. This was deposited in the Miocene, about 20 million years ago, by rivers that meandered across a landscape that didn’t have the high topography of today,

In a low cut-bank of Mata Creek a layer had been exposed that looked like a stack of old newspapers charred by fire on their edges. Sandwiching this, above and below, was the more typical white sand laid down by the Fiddlers Member rivers.

A Miocene fossil ‘leaf pack’ – thousands of fossil leaves compacted together in the bank of Mata Creek, near St Bathans, New Zealand.

The magic happened back in the lab. What looked like flakes of old newspaper, were in fact fossil leaves along with some small twigs. Long and gentle treatment with bleach turned the dark, opaque fragments into beautiful, golden and translucent specimens (see featured image). The stack of newspapers was in fact, a solid Miocene leaf pack – hundreds and hundreds of fossil leaves, all compressed together. Preservation was so good, that the outlines of epidermal cells could be seen under a microscope.

Many of these fossil leaves belong to the laurel family. They do not grow this far south in New Zealand today (it’s too cold), a good indication that in the Miocene, New Zealand was warmer than today. Some of the laurel leaves are ‘tripli-veined’, with three large veins radiating near the leaf base. This kind of laurel leaf is not found in New Zealand at all today, but is common in some other rainforests, in Australia for example.

The long boats of Kalimantan are ideal for navigating the little rivers or streams of the rainforest. They have a propeller that is barely submerged, making it possible to skim over shallows or submerged logs. They aren’t that conformable, and their engines usually aren’t muffled. After an hour or so of squatting on a wooden beam (or none at all), I was generally looking for any excuse to get out.

A leaf pack extending into the river on a point bar in Kalimantan.

It was on one of these trips that I spotted a real, recently-made leaf pack. We were roaring along the discoloured water, almost covered by a canopy of rainforest trees, when I noticed a clear patch of the bank. Instead of being a densely vegetated green, it was dark grey, and had a layered appearance. We had the boat turned around and pulled up alongside.  It was a huge mass of leaves and twigs, separated by a smaller amount of silt. This was a perfect recent analogy of the fossil deposit that I had found in Mata Creek.

Close up view of a leaf pack on the point bar of a river in Kalimantan. A little below an to the left of the upper hand is a leaf very similar to the Miocene fossil shown in the featured image.

The best part was that I could now actually see – just where a leaf mat occurred in the river system, and how it had formed. The leaf mat was on a ‘point bar’. These are the inner parts of the meanders in a meandering river. While the outer part of the meander loop cuts into its bank,  the inner part grows by dropping sediment – and in this case, leaves.

Diagram illustrating where point bars (the yellow) occur in a meandering river. Arrows indicate the current direction. Fossil leaf mats can be deposited on these point bars.

Vast amounts of leaves are dropped into the river from the rainforest canopy. During floods, the leaves tend to get sorted from the silt because of their lower density and bigger size. When the currents drop, on the point bars, a layer of almost nothing but leaves can be deposited on ‘normal’ point bar sand.  Then, if the next flood doesn’t wash it away, it can be covered with a layer of sand – and a fossil leaf pack is in the making.

A view of another leaf mat, this one more clearly showing it has been covered by a layer of white sand.

I’m a great fan of trying to see ‘living’ examples of what you come across in the geological record. In this case it made a welcome relief for a sore butt sitting in a Kalimantan long boat.