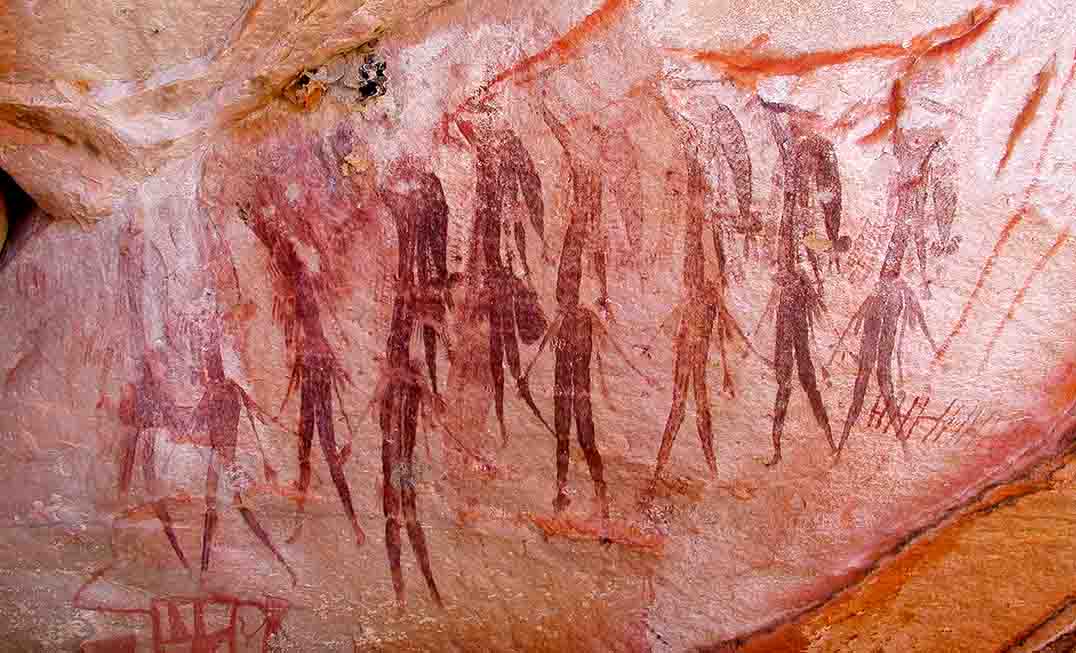 Many of the real advances in science seem to come from a sudden ‘insight’ ( think Archimedes and “Eureka!”) – and there is often no simple connection between collecting data and that ‘aha!’ moment.  The tedious data collection happens, but at some moment, the brain, perhaps quite subconsciously, puts two and two together, and comes up with something more than four. Grahame Walsh was a man who dedicated most of his life to studying the ancient rock paintings of Australia. After having spent about twenty years recording paintings in the Canarvon Gorge region of Queensland (and many other parts of the state), he also spent thirty working in the Kimberley – the remote, north-west corner of the continent.

The extraordinary Grahame Walsh – an authority on Australian rock paintings.

The fundamental part of his research was a grueling regime of surveying. Scattered over the rock outcrops in the Kimberley there is a series of often very distinct painting styles. There are rock faces where there are layers of paintings, one over the other. Oddly, the older paintings are often better preserved than the younger, as they are ‘sealed’ by a layer of natural silica varnish.  These superimposed layers provide a kind of stratigraphy of painting styles, and persistent study by Walsh and others, worked out the relative order of these painting styles. But the big mystery, was not the relative but the absolute date. Just how old were they? Almost all of the sites with paintings do not have associated archaeological  material that can be easily  dated.

Thousands of years of overlapping rock paintings in Australia’s Kimberley region. Instances like these provide a kind of ‘stratigraphy’ that allowed researchers such as Grahame Walsh, to work out the relative order of painting styles.

Walsh came up with a compelling scenario. A part of the painting style sequence could be interpreted as passing from an earlier time of abundance, where the paintings emphasised personal adornment, with no indication of aggression or violence. These have been called the ‘Bradshaw’ style, although ‘Gwion’ is used by some researchers (see figure below and the featured image).  The paintings then become militaristic, including regimented ‘toy soldier’ like individuals, with weapons. Then there was an apparent long gap, where no paintings were made, but existing paintings were ‘sealed in’ with a layer of natural rock varnish. After an unknown period of time, painting began again, but in an entirely different style. These continued to be painted until the Europeans invaded.

An example of the Bradshaw style of Kimberley rock paintings. Nice the costume ‘finery’ and ornate hair styles.

To Walsh, it seemed like this particular sequence recorded first a time of resource abundance – essentially ‘good-times’, which then passed to scarcity, resulting in violence. Then there was a time gap – when environmental conditions may have been so bad, that no one was in the area at all. Finally, when conditions improved again, a new culture moved into the area with different ideas about what to paint. Walsh’s insight was to suspect that this sequence was the run-up to the peak of the Last Glacial Maximum (around 17,000-21,000 years ago), and then the return to good times in the post-glacial Holocene. At Glacial Maximum, there was so  much water tied up in the worlds ice caps, that parts of Australia became super dry and humans were probably driven out of some areas – hence a gap in painting.  It was so dry that constant dust storms were blowing – and these were the cause of  the rock varnish.

Confirming this scenario was the problem. Walsh collaborated with some other researchers who had developed specialised techniques to date minute pieces of material. Richard Roberts used a technique (Optically Stimulated Luminescence – OSL)  that determines how long ago quartz grains were exposed to sunlight. The brilliant part here is that mud wasps in the Kimberley build their nests in the same rock overhangs as the paintings. Mud containing quartz grains is collected bit by bit by the wasp- and it is exposed ti the sun. But when it gets packed away into a next, it is sealed in darkness.

The core of one mud wasp nest yielded an age of  around 17,500 years (Roberts et al. 1997). This implied that a possible Bradshaw figure was even older, and the stencil of a hand below that, older still. It meant that these were painted at, or even before the Last Glacial Maximum. It supported Walsh’s insight. This date makes the Bradshaw Paintings remarkably old – perhaps older than the famous paintings at Lascaux in France, which are about 18,000 years old.

An example of a typical rock outcrop with Bradshaw rock paintings. There may be hundreds of paintings in such a spot – but little or no trace of who painted them in the ground below.

Another researcher involved in the study of the paintings was Alan Watchman. One of his specialties is the carbon dating very small fragments, and as well, he has an interest in the kind of rock varnish that covers the older paintings. Watchman collaborated with Walsh to collect material from paintings that could be dated, for example, a beeswax resin component . However, when he published his results, in the same year as Roberts and co-authors work on the mud wasp nests (Watchman 1997; Watchman et al. 1997), Walsh was not included as a co-author, and Watchman came up with very different results. Watchman’s pioneering estimates for the age of some Bradshaw figures and some from an even older painting style, were in the range of (only) 3,000-4000 years.

An example of a much younger painting style than the Bradshaws.

Robert’s Pleistocene results came under intense scrutiny. For instance, Aubert (2012) focused on both the location of the wasp nests with relation to the paintings, and details of their sampling and, in a blow to Team-Walsh,  concluded that there was “no substantial evidence” for a Pleistocene age. On the other hand, Bednarik (2014) threw a life-line to Team-Walsh by arguing that the organic material within the paint residues  may have been “acquired subsequent to the time of rock art production”.  In other words, there was now a mechanism to account for the young dates obtained by Watchman, but still have old paintings.

However, at around this time another group of workers came up with a new scenario for the sequence of Kimberley paintings.  They basically agreed with Walsh about the climatic significance of a ‘gap’ – but they incorporated Watchman’s younger Holocene dates.  Based on a record of fossil pollen, charcoal and dust, McGowan et al. (2012) found evidence for an exceptionally dry phase in the Kimberley in the mid Holocene. Thus, they proposed that Walsh’s ‘gap’ was not at the height of the Last Glacial Maximum, but relates to a ‘mega drought’ that occurred around 6300-3400 years ago and which was triggered by changes in the El Niño Southern Oscillation. This paper got my attention, and it was what stimulated me to write this. Was Walsh’s claim of amazingly old paintings wrong after all?

Come 2016 and out came a new paper (Ross et al 2016) using the OSL technique on mudwasp nests. It was mostly  a new group of researchers and a far more rigorous procedure was used than the pioneering work of Roberts et al. The minimum age of one painting was established at 16,000 years old. Unfortunately that particular figure could not be clearly placed into one of Walsh’s painting styles. That is disappointing, but the important conclusion is that Pleistocene aged rock painting in the Kimberley has probably been solidly established. McGowan et al’s drought was surely real, but just not the cause of the gap in the painting sequence.

Science seems to jump forward with ‘insights’. They may or not actually be right, but they do tend to stimulate more research, and that’s a good thing. In any case, my money is on Walsh being on the mark.