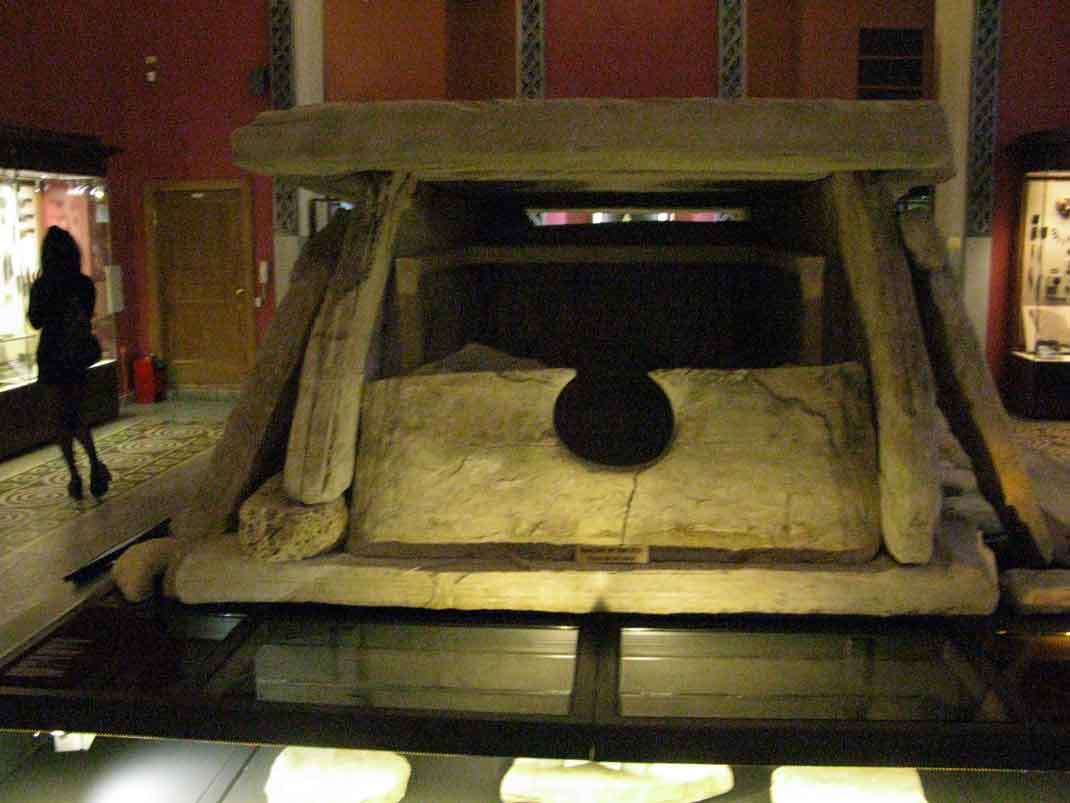 Travelling in Russia last year I got a chance to see some of it’s famous prehistoric ‘Porthole Dolmens’.  Now there is a solid dollop of ‘Atlantic facade’ DNA in me – i.e. Ireland and Scotland, and one of my pet fascinations is for the ‘megalithic monuments’ of those areas. Building megaliths was a widespread phenomenon in western Europe, around 4,000-3,500 BC. Dolmens are a particular kind of megalith where a few larger rocks support a kind of roof and were probably tombs. It’s a pretty good bet that anyone with a similar ancestry to me, had ancestors stashed away in those dolmens.

Impressive as they are, the dolmens of my ancestors are pretty crude affairs, built from just a few very rough rocks (think ‘Asterix’). But, if you travel in Russia, though, be prepared for a shock. In the edges of the Caucasus Mountains (South Russia) are dolmens that were so carefully constructed – that they are virtually houses. They are built from rocks that were carefully dressed, to give flat surfaces that precisely joined. Most astonishing of all, many of them had a circular ‘porthole’ carved through the rock of the front wall.

These dolmens have attained mystical status in Russia and as such, have become sites of pilgrimage (Markovin 2002). A Google search on the topic will turn up numerous pages asserting they are 25, 000 years old – far in advance of what traditional archaeology would accept. So what is the truth? Part of the problem is that despite being well-know for a long time (e.g. Chantre 1885) over the centuries, the contents of most dolmens have been ransacked. Sometimes an invading culture has cleaned out the previous occupants, and replaced them with some of their own. One straightforward view of these dolmens is that they are ‘stone boxes’, and therefore a magnet for any invaders or just free-booting pirates.

Porthole dolmen at the ‘Peasant Farm Enterprise ‘Dolmen’, South Russia, with the Caucasus in the background.

Careful archaeological work (Markovin 2003; Trifonov et al. 2012; Trifonov 2013) on what has remained has shown that they date from around “the end of the fourth- and the end of the second millennium BC” (i.e. from, say, 3200 – 1200 BC) and were the central parts of  quite complicated installations. They are linked by some with the ‘Maikop Culture’, but this, as is the whole issue of defining archaeological ‘cultures’, is much debated.  One of the critical finds was a dolmen that had been hidden away, intact, below the sediments of the Kolikho River in the Krasnodar area. This time-capsule came to light in 2008 and had the skeletons of about 70 people in it . After excavation, the entire dolmen was transported to Moscow – and reassembled in the State Historical Museum (at the entrance to Red Square, see the featured image). If you are in Moscow, this museum is an absolute must. But if you venture south – much further south – then you can get into the original dolmen land of South Russia. However, once there, getting to dolmens will likely require the services of a good guide and driver, and perhaps a rugged vehicle as well. But there is an exception….

Map of the South Russia-Crimea-Black Sea region showing the location of the ‘Peasant Farm Enterprise ‘Dolmen”. Red lines are some main roads, showing a loop from the regional center of Krasnodar.

In South Russia, head east along the main road from the city of Novorossiysk, with the Black Sea on your right and the Caucasus on your left. About 55 km on (straight line), right on the road, is the entrance to ‘The Peasant Farm Enterprise ‘Dolmen’’ (long 38.34926º, lat 44.45805º, it shows up nicely on GoogleEarth). There is a small admission fee, but then you are free to walk the forest trails and see (and touch/crawl into, if that’s what you want) the several dolmens on the property.

And if it’s stinking hot, like it was in July when I was there, you can buy beer (and local honey). The park’s slant on their dolmens is definitely ‘mystical’, but this shouldn’t distract from the genuine gems that they have, the forest, and the view of the Caucasus behind. Thirty km past here the road swings inland, and will take you through Caucasus, and up to Krasnodar City.

Interior view of a porthole dolmen at the ‘Peasant Farm Enterprise ‘Dolmen”. in South Russia.

If you want recommendations for guides and drivers in the Krasnodar region, I suggest two:

1. Eugene Prygoff. I worked with Eugene for several years in Mongolia, Turkey and Indonesia when we were both in exploration geology. As geological work fell-off with the economic crisis, Eugene started a guiding business based on his home region of Krasnodar. However, geology work is taking off again and at present, that is taking priority over his guiding. Eugene put me and my travel companion in touch with Olga as an alternative:

2. Olga Tikidzhan. Olga was our excellent guide and driver in July 2016. She has plenty of experience in the South Russia-Crimea region, suggested routes, and found accommodation. She drove us around the Krasnodar- Adygiz region, then on to the Crimea (where Olga rustled up an amazing place right above the Black Sea), and finally suggested we come and see her home town of Taganrog. Up there we got to see the ruins of the ancient Greek city of Tanais. I’ll post separately about these places.

She can be reached by:

References (clickable links will take you to a pdf)