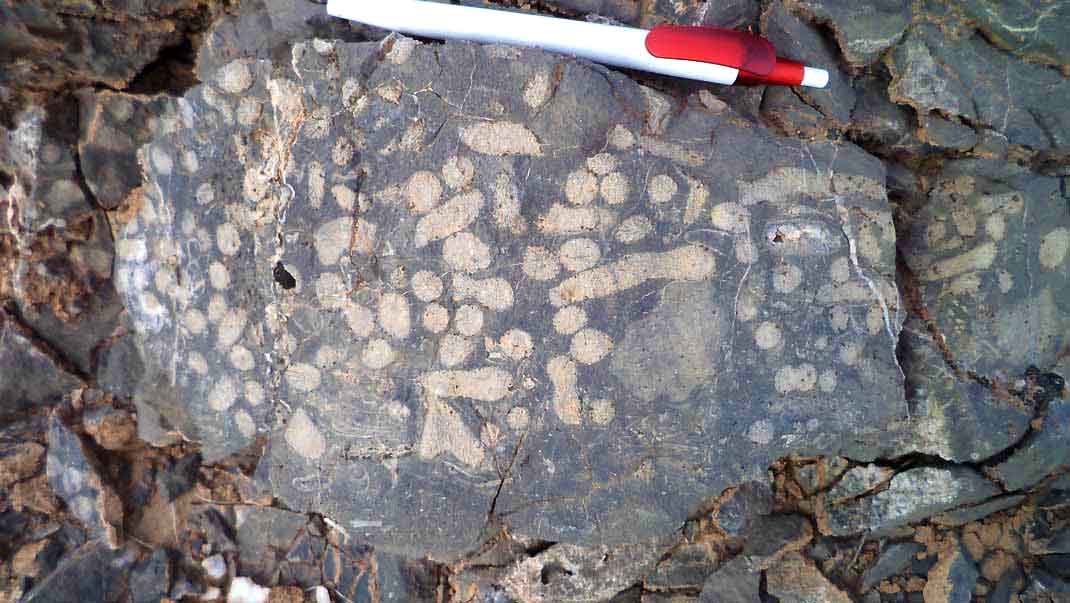 Corals in Mongolia – is there a better example of dramatic Earth-change?!

The Gobi Altai -the mountains flanking the Gobi Desert, are far from the sea. They are semi- arid, bitterly cold in the winter, with lots of bare rock and virtually no trees.  Nomadic herders keep their flocks on the move, there is so little to eat. It can be a pretty barren, but spectacularly beautiful place.

The Gobi Altai mountains are in the south west of Mongolia. The locality described here is about 720 km from the capital, Ulaanbaatar.

When I walked and drove this vast, sparsely populated area as a geologist, it was always exciting to spot fossils. But I also realised I  was a ‘Johnny Come Lately’ – there never seemed to be anything that had escaped the diligent work of earlier Soviet and Mongolian geologists. Whenever me and my colleagues ‘discovered’ fossils, a glance at the published geology maps would tell us that some of our forebears had trodden over those very same rocks. They had been there perhaps 20-30 years before, and symbolically marked the fossils on their maps – as well as the dates revealed by studying the fossils. They had done the ground work, and impressively so.

Looking over the rocks with fossil corals in the Mongolian Gobi Altai.

One day when we scrambled up a bare, rocky slope – we found fossil coral heads, all sorts of different types, as well as fossil ‘sea lilies’ and various shells in profusion. The layers of rock were obviously once the bottom of a sea – and a warm, rich, biodiverse sea at that. Our predecessors work told us that these fossils were Devonian – about 400 million years old. This is commonly known as the ‘Age of Fishes’, but may as well be called the ‘Age of Reefs’.

A fossil coral-head, next to some of the few green plants in this barren area.

As usual, the site was already known. But finding out any details frustrated me. What species had been found here? What was the local environment? What was the bigger picture? The older published scientific work was most likely in Russian, and not something easy to find out about, let alone get hold of. Nevertheless, I kept searching the internet to trawl up whatever I could that might be added to our own growing database of observations. Helpful works on the regional geology turned up, but not on local details.

Fossil shells that occur with the coral.

Some authors specialise on the big geographical picture. They have tried to make some sense of the complicated geology of the Gobi Altai. The Devonian corals are just one small component of a mosaic of rocks that can be much older, much younger, volcanic, metamorphic and sedimentary, all sliced together finer than herbs on a reality TV chef show. Researchers Melissa Lamb from Stanford University and Gombosuren Badarch of the Mongolian Academy of Sciences published a fascinating ‘broad-picture’ paper in 1997. The details will have changed since then, but the basic conclusion won’t. Much of the Gobi Altai in the Devonian was open sea, but with emergent volcanic island arcs, flanking a small continent. Carbonate reefs grew in the shallow water around the volcanic isles (this makes me think of the Indonesian archipelago today).

One thing that did bug me has now been answered. On our geological survey we saw isolated fossil coral heads, and accumulations of fossil debris. To me, this is what might have accumulated around the edge of a reef – where dead remains sink, perhaps following storms. But why were there only reef-flank deposits? Why did we never find an actual fossil coral reef?

The Gobi Altai is so deserted that it was usual for us not to see anyone else – and no sign of humans for tens of miles around. At times it was so quiet I could see and hear my own heart beat. And yet, scientific teams were occasionally working there. We may well have passed each other, ships in the night. A 2012 publication (the year after my visit) by Princeton paleontologist Adam Pellegrini teamed with Constance Soja (Colgate University) and Chuluun Minjin (Mongolian University of Science and Technology) would have been one such group. They did their detailed work 20 km along strike of ‘our’ fossils. Their paper points out the location would have been about 35° from the equator in a world were the seas were an average temperature of 30° – plenty warm enough for reefs to form. It seems that despite most of the right organisms being present to build a reef, they concluded that it didn’t happen because of a combination of factors – an unstable substrate, lack of continually deepening water to keep growing into, and that the Gobi Altai may have been rather isolated within the ocean at the time.

Back to the bigger picture . In 1898 a smart American geologist, Thomas Chrowder Chamberlin, had figured out an implication of the chemistry of the global carbon cycle. By this time it had long been known that carbon dioxide (CO2) is removed from the atmosphere as part of the process of rock weathering (it’s the only significant way). It then travels down rivers to the sea in dissolved form. Once there, it transforms again, into solid carbonate – broadly ‘limestone’, including things like coral reefs. But there’s a catch. For every molecule of solid carbonate that forms, one molecule of CO2 is made, and goes back to the atmosphere. Since CO2 is a greenhouse gas, Chamberlin figured that periods that had widespread shallow seas in which lots of limestone formed, like the Devonian, were probably remarkably warm.

Chamberlin was on the right track. Nothing wrong with the chemistry, but the phenomenon of continental drift/plate tectonics was entirely unknown then. More importantly, he wouldn’t have known that this process is driven by ocean crust production. This is basically a volcanic process, and the faster it happens, the more CO2 is pumped out by those volcanoes and the higher the sea level (young ocean crust is relatively warm and thick)– the more shallow seas – and the more limestone. So there was a more fundamental process going on that what he had any inkling of. He couldn’t have known that the process recycles ocean floor, along with its limestone, making it a devil of a job to quantify just how much limestone was formed in different periods of Earth history.

In fact, the Devonian really was a time of remarkable reef and carbonate ‘platform’ production (Kiessling et al. 2003). Canadian-American workers Paul Copper and Chris Scotese (2003) described the ‘megareefs’ of that time, living in what was a ‘supergreenhouse’ climate. Think of reefs bigger than the Great Barrier Reef, and several of them – with an atmosphere having perhaps 8x the CO2 of the recent past.

So if you’re in the Gobi Altai (and you should go), drop by and have a look at these wonders. The fossils are about 20 km SW to SE of Shinejinst soum, at around 99.1488° E, 44.3959° N. Don’t take – Mongolia keeps a watchful eye at the airport for signs of fossils leaving the country. If you go in summer, it may not be coral-reef tropical, but it will likely be hot and sunny. As travel guides, I recommend OffRoadMongolia.

Chamberlin, T.C., 1898. Influence of great epochs of limestone formation upon the constitution of the atmosphere. The Journal of Geology 6, 609-621.