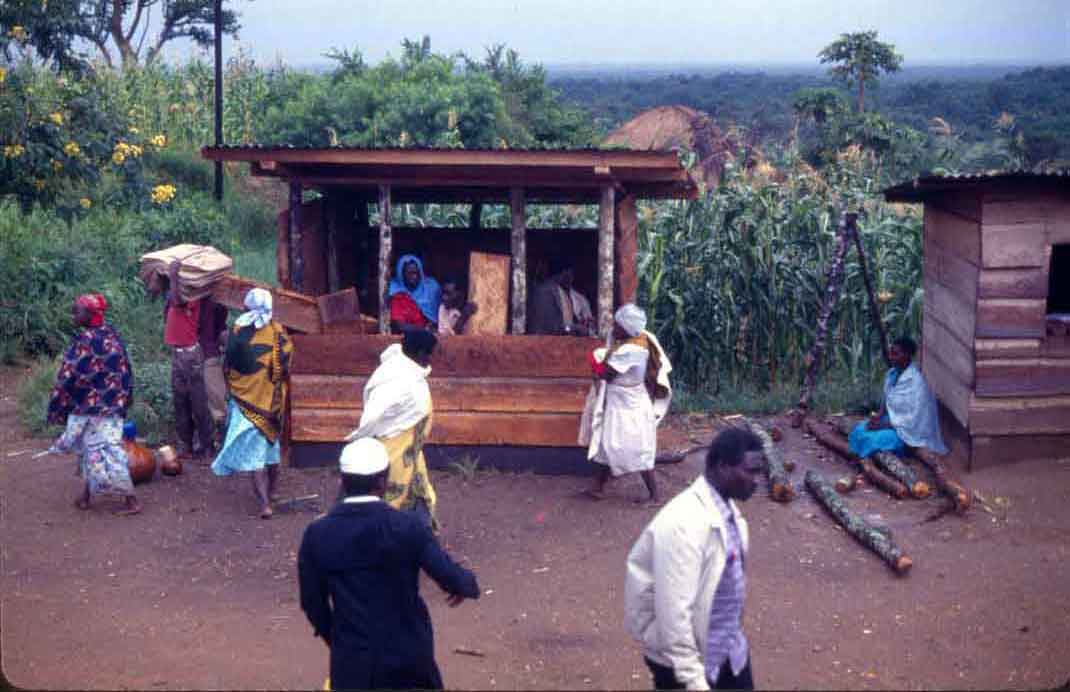 As I lowered my arse out the door of the moving train, with my trousers and undies around my ankles, I saw a terrifying sight.

I had a vague plan to get to South Africa, kind of over-land. Starting in Nairobi, Kenya, I had made it to Kampala, the capital of Uganda. The city had a chaotic, make-shift feel to it. The bus-park where I arrived was a huge sprawling affair, with hundreds of mini-buses and pick-ups coming and going. Screaming  and hurrying additional passengers aboard, where they might then sit, in the stifling heat for a few more hours, until the vehicle was full.

From here I planned to take the train to Kasese – an overnight trip to the west. I’d met a young American chap who was also going to be on the train that night. We both needed to change some money, him quite a lot. We’d read that a certain someone operating out of one of the big hotels was our man to see. In the evening we made our way along the darkened streets – most of the shops looked like they had rebuilt themselves in bombed-out shells of former buildings. We got to the hotel and easily found the money-changer. We handed over $US70, a reasonable fortune, and were told to wait on the edge of the car park round the back.

We sat on a kerb, with the back door of the hotel behind us. In front of us, we could just make out several minibuses, and in the dark, just see the silhouettes of their drivers, sitting motionless in the cabs. It was a reasonable bet that they were staring at us, a couple of mazungus (white people) glowing in the murk.

It must have been half an hour before we really started questioning the wisdom of simply handing over a large amount of cash to someone we’d never met, in a country where various travelers had recounted alarming tales of meeting soldiers insisting they come for a “walk in the forest”. But just then a figure emerged from the blackness, coming towards us, across the park. We had started to stand up, when it hissed “Make like you are shaking hands! Make you you are shaking hands!!” I held out a hand and quickly another, to receive pile of cash that could barely fit inside my day-bag.

We scurried, wide-eyed, back through the dark streets, feeling like we somehow had big targets painted on our backs. But nothing happened, and at the station we found our train. Here was a bit of a shock. The carriages had been stripped bare of all fabric – the seats were bare springs and wood. The locals all knew this, and had come prepared with sheets of corrugated cardboard. Some kindly souls gave some to us.

The next shock was once we got moving. It was hardly very fast of course, but there were two kinds of motion – a bucking that sent us up and off out seats, and then a sideways flick, that periodically whacked us against the walls. The train was like an arms museum. There were guys wandering around with an amazing assortment of weapons, from standard AK47s to what looked like Word War 2 bren-guns. One hyped-up, gun-totting chap asked us about Michael Jackson – he was amazed at what he could do, unable to distinguished between the very-real Jackson dancing and the special effects. When he wandered off, another guy explained, matter of fact, “You can tell he’s been in the war – he’s a little unstable”.

At various times in the night the train would stop – outside would be a row of tiny shops, lit only by dozes of candles, and selling snacks. Women would clamber onto the train with trays of food.

Sometime in the middle of the night, I decided I need to pay a visit to the toilet. I wasn’t sick or anything, cerebral malaria was a bit further down the track. It was just a case of ‘when you gotta go, you gotta go….’. I lurched my way to the back of the carriage, fighting the bucking and sideways flicks. At the end of the carriage, as expected, there was a door into a toilet. But … oh my God. I’ve seen some pretty bad ones, but this was literally, ankle deep in flowing shit.

So – the main door of the carriage. I hauled it open, turned around, pulled my pants down, then, holding onto the door, lowered myself out into the night. It was like riding one of those mechanical bulls they have a rodeos. But it was then, in the dim light from the carriage, that I saw it.

Sitting exposed on my underpants, was a sock. It was a sock containing all my US cash for the rest of the trip through the middle of Africa. I’d put the cash in the sock where it sat snugly at the bottom of my undies. Money-belts don’t fool anyone of course, and if the bad-guys got as far as my underpants, well….. Anyway,  there it was, bucking and tossing, a meter or so above black oblivion. Breaking into an instant cold sweat, I carefully hauled myself up, and snatched the sock.

We reached Kasese in the morning. The American was heading up north to some volunteer program. After parting, I made my way out of town to a spot where the Equator crosses the road, the site being marked by a large concrete ring. I had just arrived and was wondering how to manage a ‘selfie’ when a local chap passed by on a bike and offered to photograph me. I gave him my camera and went and posed, standing there as my camera was pointed at the sky.

“I see you now!” Me at the Equator, Kasese, Uganda.

Weeks later I met another traveler who took that train sometime after I did. It had rolled off the tracks in the middle of the night, killing a baby. But in the years since that trip I’ve often wondered what I would have done – if that sock had fallen. Ran back inside, grabbed my pack, and hurled myself into the African night? Waited til first light and walk back along the tracks? Each time I think of it, I get that same cold sweat.