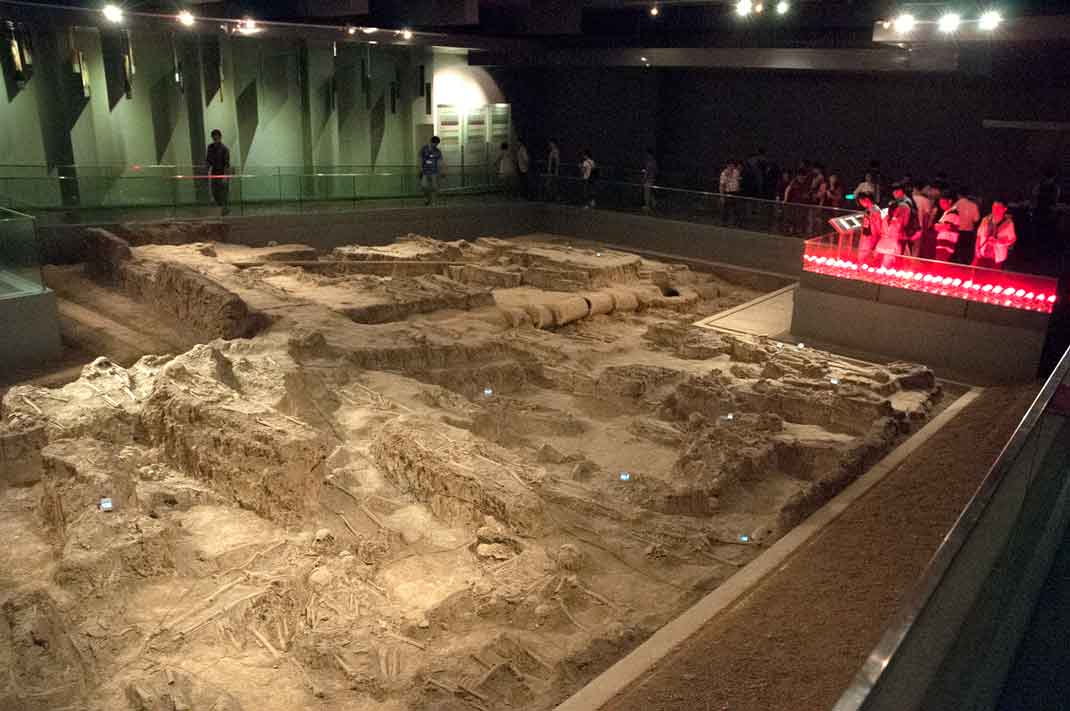 Arguably, the most shocking part of Iris Chang’s book ‘The Rape Of Nanking’, comes in its Epilogue.

During my 12 months living in Nanjing (sometimes written Nanking) , what struck me was a disturbing lack of even slightly old buildings. There are some old treasures – Nanjings famous city wall, is an almost entirely intact, 40 km long structure built in the 14-15th century. But within those walls, old stuff gets sparse. There are ‘historical’ temples – the Jiming Temple for example,  but they aren’t without hints of the proverbial bushman’s axe (‘Had the same axe for 60 years, replaced the handle four times and the head three”).  Now I’ve been in Berlin – a city that was comprehensively flattened in World War Two, and despite that there are still plenty of pre-war buildings. Even Warsaw for God’s sake – a city flattened then flattened again, still has old buildings. But beyond a very few carefully circumscribed structures, most of Nanjing appears to have been erased – well after the war. Most signs of the past have gone. Whoever holds the reigns of power in the city has an extraordinarily low interest in preserving any physical links with history.

When it comes to a particular past event, its a different story. Before I went to China, I had heard of the ‘Rape Of Nanjing’, but I certainly didn’t know more about it than it happened in World War Two, and many people had died at the hands of invading Japanese. So I bought Iris Chang’s book to smarten myself up.

And it’s numbing. The historical context was that Japanese forces first took Shanghai, which lies on the coast, today an easy two hours by bullet train from Nanjing. After Shanghai fell, the Japanese troops were in an unpleasant mood as they made their way west across swampy land towards Nanjing. The local government had fled inland, leaving those who remained to look after themselves. By the time some 50,000 Japanese soldiers assaulted the city, it contained about 500, 000 civilians and 90,000 Chinese troops.

Japanese troops had endured a system of incredibly brutal army training to numb them to killing, which in some cases was said to have included bayonet practise on live prisoners. “It helps them acquire guts,” an officer told one of the Emperors brothers. They had in fact, been taught that their own life was valueless. Of course, there was also a culture of absolutely no surrender. The outcome of this indoctrination was apparent as the Japanese Army made its way to wards Nanjing, when spontaneous killing competitions (first to reach 100) were breathlessly reported in Japanese newspapers. After just four days of fighting, these were the kind of people who entered Nanjings city walls – and were given orders to kill all prisoners.

Skeletons of massacre victims lie where they were dumped in the Nanjing Massacre Memorial.

As Chang wrote, what happened next “was not a temporary lapse of military discipline, for it lasted seven weeks”. Reasoned calculations have concluded that the number of people subsequently killed was well above 400,000. That is, about half of everyone who remained in the city. Few of the surviving women were not raped. A handful of westerners also remained (and survived) in the city, even a remarkable Nazi, John Rabe. They did what heroic little they could.

Civilians and surrendered soldiers alike were executed on an industrial scale. Even Japanese correspondents who watched prisoners lined up and bayoneted or machine gunned – in their thousands, were horrified. Thousands were machine gunned where they were trapped on one side by the Nanjing River.

Mural of the riverside massacre, hanging in the Nanjing Massacre Memorial.

Chan’s documentation of the details makes hair-raising reading. Skipping past them, some of her descriptions of the ‘clean-up’ will suffice: “For three days starting on December 15, 1937, [one Japanese] army unit dumped 19,000 bodies of Chinese victims into the Nanking River, while a neighboring unit disposed of 81,000 bodies and other units got rid of 50,000”. Between January and March 1938, “one burial squad alone disposed of more than 30,000 bodies” while “charitable organizations in Nanking buried at least 185,000 bodies, private individuals at least 35,000, and the Japanese-controlled local government more than 7,400”.

Chan confirmed my impressions about the age of buildings in the city. She wrote: “In the summer of 1995 I became one of the first people from the West to capture on videotape the oral testimonies of several survivors of the Rape of Nanking. Sad to say, if I had visited Nanking only a decade earlier, I would have found many sites of the massacre intact, for the city was then a model of historical preservation and much of its 1930s architecture was still standing”. It’s certainly all gone now.

Skeleton No. 6: “19-year-old woman, with nails in both sides of her skull and an obvious bayonet cut in her right pelvis”, is at lower-right.

However, one massacre site has been preserved as an in-situ museum. You enter the suitably somber, grey exterior of the Nanjing Massacre Memorial Hall, and then find yourself in a semi-darkened interior, staring down at some of 208 partially excavated skeletons (see featured image). The bodies are in the same positions in which they were dumped, or fell, in those dark days of 1937-38. Labels around the edge grimly relate back to numbered skeletons (e.g. No. 6): “19-year-old woman, with nails in both sides of her skull and an obvious bayonet cut in her right pelvis”.  A huge mural of the river-side massacre hangs damningly above some of the skeletons.

Mural of the river-side masscre, hanging above in-situ skeletons.

So here is a tiny fragment of that missing history of Nanjing. Whatever has happened to everything else, the Chinese have chosen this spot to remain as a shrine, a spot on which to focus memory of that terrible event. As an example of ‘dark tourism’, few surpass Nanjing’s Massacre Museum. On a broader scale, the ‘Rape of Nanjing’ is just one more testament to humankind’s propensity to Manichean thinking – what the madness can lead to when an unbridgeable chasm forms between you and ‘The Other’.

Skeletons in the Nanjing Massacre Memorial.

And then the Epilogue of Chang’s book. Chang spent years investigating for her work, interviewing survivors and researching documents. In 300 pages I of course got to feel a little familiarity with her. But nothing quite prepared me for the Epilogue, finding it written by her husband, discussing her in the past tense.

Chan’s research didn’t cover just the event. Afterwards, there was of course, a war crimes trial. The hapless couple whose killing competition made it to the newspapers, were executed. At the other end of the scale, the Japanese emperor, Hirohito, was given immunity from war responsibility and kept on the throne. As another member of the imperial family, his uncle Prince Asaka, under whose command the ‘Kill all prisoners’ was carried out – also never had to appear in court. More ominously, Chan wrote: “Even most of the Japanese high-level military records that the American occupation forces did manage to seize in 1945—documents which one professor called “a priceless historical treasure”—were inexplicably and irresponsibly returned to Japan by the American government little more than a decade later before they could be properly microfilmed”. There were other incidents.

Researching this book must have been a terribly disturbing exercise. It’s bad enough just reading it. Chang didn’t just document the massacre itself, but what happened, or didn’t happen, afterwards. After all that horror, one gets a depressing feeling of selective justice, and to a deeply involved author, this may have been a fatal blow.

Chang, I.  2014. The Rape Of Nanking: The Forgotten Holocaust of World War II. Basic Books.