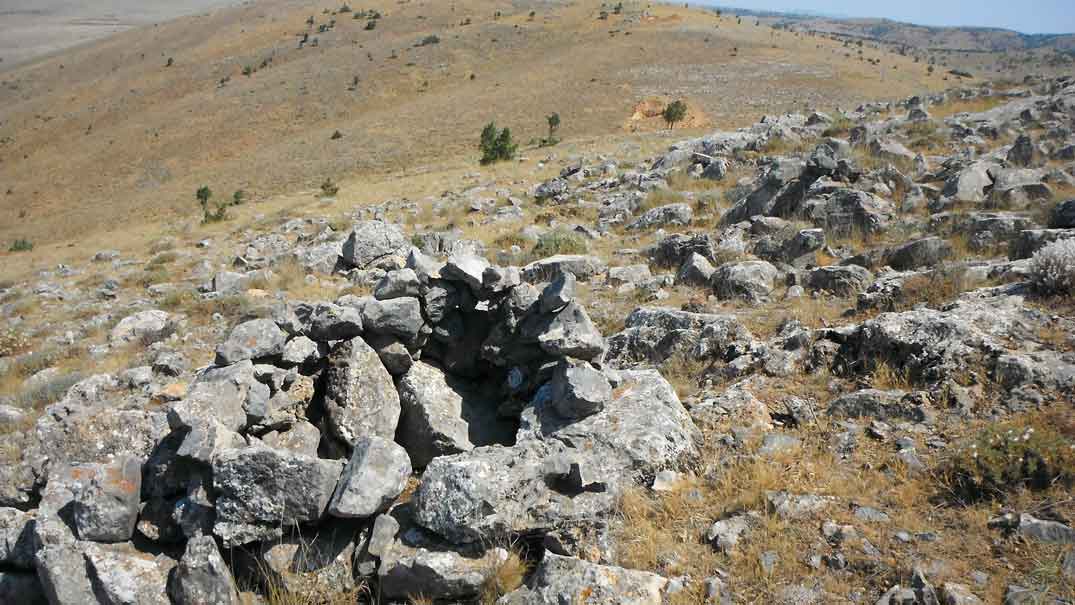 ‘Fox-holes’ perhaps? Did snipers crouch in these to fire down on an enemy below? What were these little rings of rocks strategically placed high up along the edges of central Turkish gorges?  (see the featured image) How old are they? Fifty years? Five hundred? Five thousand maybe?

We geologists all lived in a wonderful house on the edge of Develi, a town at the foot of the volcanic Mount Erciyes. It’s a relatively conservative part of Turkey – on a trip to the town centre we would typically see 60-70 men for every one woman. In the countryside, the women you did see, often as not, were dressed in the traditional voluminous pantaloons, as they worked the fields of vegetables. Not a tourist in sight here, and yet, just 45 minutes drive and a whole world away, was the back-packer/banana pancake Mecca of Cappadocian cave towns.

Our house had a balcony facing a small street with neighbours all around. I suspect they soon referred to it as a Turkish version of the ‘House of the Rising Sun’. When we first arrived, we were told that there could be no drinking on the balcony. It might upset local sensitivities, But what’s a geologist to do, after a gruelling, sweaty day of walking the mountains? The balcony and the cool evening air begged. So the rule was soon relaxed to ‘Drinking OK, but no bottles. Pour your glasses inside’. Fair-enough, but all the same, tea towels were typically strategically hung up to shield the good passers-by from the sight of a row of reprobates sipping raki on the balcony.

While we sat there, the local children would come out, and in couples, or small groups, slowly cycle and walk around the block. We all had our evening ritual. Next door a tall woman with long black hair (no head scarf) would occasionally walk past, or her teen aged daughter. But baring the odd glance from the very youngest children, no one ever, ever, looked our way.

Not that we were any particularly bad influence – Turkey is basically Muslim, but they have a relaxed attitude to alcohol, and there were numerous bottle shops in town. In the holy month of Ramadan a drummer walked slowly up and down each street, waking everyone up – at 02:30 am. But the bottle shops didn’t close – the owners just cellotaped newspapers over the shelves of offending bottles, and you could still buy what you wanted.

Almost at our lease, we come across a sheep dog leading a flock. The green area off to our left is a popular picnic spot, and we would always slow down to avoid creating any dust.

In the mornings we would pack our lunches then kit up with the tools of our trade (for me: rock hammer, GPS, camera, note book) and pile into a vehicle. From our home we drove along the intensively farmed and green valley, then wound our way up into the drier and more barren hills. Almost at our leases we passed a grassy, tree-lined stream, often dotted with picnicking families. To avoid creating any dust on the dry gravel road, our Turkish driver always slowed down to a crawl – traditional Turks place a high emphasis on respect. Then past a few ancient houses (and whispers that these once belonged to Armenians) and nearly an hour from home, we reached the middle of our ground.

From there we would head for the hills on foot. I would go off by myself and typically never encounter another soul throughout the day. My playground was several small mountains separated by deep gorges – an area about 4 x 15 km. In other places I’ve worked, geological leases are right-angled polygons, outlined by lines of longitude and latitude. Turkey is different, using prominent land marks as the corners of leases that may be triangular or diamond-shaped. In our area, the minaret in the tiny village of Suleyman fakili formed one such corner, while mountain peaks were others.

Even on the odd occasion that I passed through the village, I mostly never saw anyone. On the few times I did encounter the friendly farmers, German turned out to be our mutual language. Many of the older generation had spent time in Germany as ‘gastarbeiter’ and were still well familiar with the language.

Turkish farmers on our lease

The hills were made of limestone – formed on the floor of the ancient Tethys Sea, millions of years ago. Here and there, were fossil shellfish, or heads of coral. Much more recent volcanic basalt had formed some hills and flowed over parts of the lease. Our main interest was in big cracks in the limestone which had acted as conduits for mineral-rich liquids. Ores of lead and zinc had crystalised in these. The Romans knew all about our lead and had mined it here two thousand years ago. But they didn’t know about zinc. The boulders of zinc ore were tossed aside into piles with the rest of the waste they dug up.

Much later, mechanised Turks dug deep open-cast pits in search of both lead and zinc. The ‘free’ zinc that the Romans had generously left, was quickly snapped up. Then Turkish machinery and explosives exposed the (very) narrow tunnels laboriously created by Romans (or perhaps more likely, their slaves).

The fissure running up from the figure at the base to the top is a Roman lead-mining shaft, exposed on the edge of a recent mining pit.

As geologists, we were trying to understand more about our lease. Which pit and what direction should we keep digging? Where might we find new deposits? Every little clue might help with the bigger picture. Sharp and dramatic changes in soil colour, for example, from greys to the rich red terra rosas typical of ‘karst’. They were hints to ancient cave systems that might have formed in the same cracks as our lead and zinc ore. I even came across the crushed remains of huge stalactites or stalagmites – all that remained of an underground world, crushed aeons ago.

But in this now almost empty land, there were signs of humans everywhere. The geological landscape was intimately mixed with the cultural one. In addition to the Roman mines, other aspects of human activity might give other leads into the geology. On my walks, I noted whatever I came across. Rectangular, stone-lined pits, sometimes with a massive roof slab – obviously graves, were all over the place. Sometimes lonely, but once, high up on a ridge, I came across a cluster of about fifty. There were some more ornate tombs, with end walls built of stacked rocks and a rough, vaulted roof. But everything was totally bare, with some of them showing depressingly recent signs of having been bulldozed open (I heard that some produced wonderful glass jars).

One of the vaulted tombs – a built-up end wall can be seen inside, and vandalism shows the vaulted roof.

There were piles of glassy green material where smelting had once taken place. I mistakenly thought this was related to the lead – until corrected that it would have been from bronze (Thanks to Damien, the Museum History Guy and his colleagues). Bronze Age perhaps? Why were they smelting that there?

I came across huge piles of rocks that were clearly not natural. Some of them may have been old walls, or field boundaries, but others were more puzzling. In one place what seemed to be the outlines of a whole village gradually became apparent. On odd spots along the hills there were curiously bare screes of boulders. Or perhaps they were not natural screes at all, but the spoil heaps of lost mines? There was a risk of seeing the human hand everywhere, and that one was a problem that I never solved.

A huge pile of rocks. What was this?

Each day around noon I would make my way to a high vantage point, or on very hot days, to the shade of one of the scattered oak trees. I’d pull out my lunch – a large, respectfully hot chilli, a tomato, white cheese, olives and a baguette, and while I ate, try to make sense of the landscape before me.

Anything old here was enthusiastically described by our Turkish colleagues as “Roma! Roma!” The old mines definitely are Roman, but a kaleidoscope of human cultures had worked these lands for thousands of years before, and the two thousand since. A recent map (Balaresque et al. 2010) shows the spread of agriculture from its origin in the ‘fertile crescent’ westwards across Europe. Our lease is right there in a core area, with farmers having working this land now for 8,000 years or so. Ample time for someone to move a rock, for whatever reason, and then in this dry environment, for it to sit, and sit, and sit….

A map from Balaresque et al., (2010) colour-coded to indicate the earliest record of farming (darker is older). The red spot indicates the area covered by this post.

And those rings of rocks along the gorges? Too cramped to hold a sniper. Well how about pits full of wood for warning fires? But how old? Fifty years? Five hundred? Five thousand? More?

Another circular ring of rocks, high up on the edge of the valley.